AWS VPC is the foundation of cloud infrastructure in AWS. When we start architecting infrastructure, we start by designing the VPCs. Whatever we need to launch, EC2/EKS/RDS, we have to launch within the VPC. If we don't plan it well, soon we will be running out the IP address or facing subnet collision while setting up network connectivity with internal/external networks. So, we will try to have a high-level idea over AWS VPC in this blog.

A virtual private cloud (VPC) is a virtual network dedicated to your AWS account. It is logically isolated from other virtual networks in the AWS Cloud. You can launch your AWS resources, such as Amazon EC2 instances, into your VPC. You can specify an IP address range for the VPC, add subnets, associate security groups, and configure route tables.

AWS VPC is like a virtual router. If we connect two of our laptops with a router, we can reach out to each other (if there's no firewall hassle) and can access public internet (if internet connectivity is established with the router). This is a high-level concept. 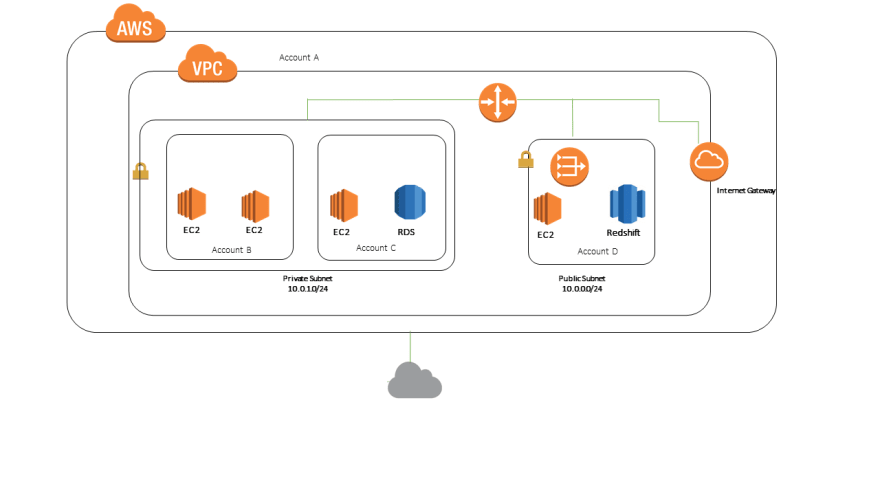 How to create a VPC?

When we create a VPC, we have to define a range of IPv4 addresses in the form of the CIDR (Classless Inter-Domain Routing) block. For example: 10.0.0.0/16 is a CIDR block that holds 65,536 IPv4 addresses.

We were talking VPC as a router, right? This CIDR block is required to define the network of the router. But we can't define network whatever we want. The allowed block size is between a /16 netmask (65,536 IP addresses) and /28 netmask (16 IP addresses). Apart from that, AWS recommends that we specify a CIDR block (of /16 or smaller) from the private IPv4 address ranges as specified in RFC 1918: 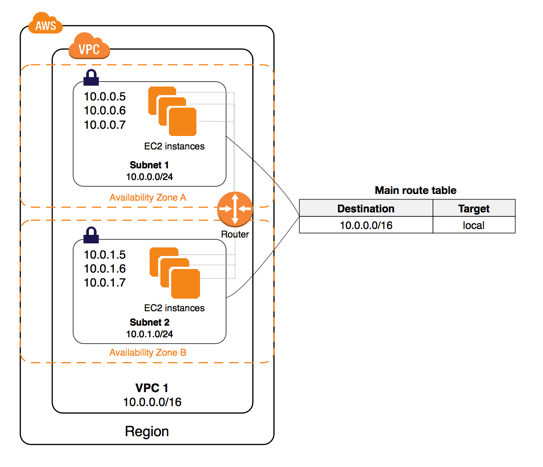 Previously we considered 10.0.0.0/16 as our VPC. We can break down this CIDR into smaller blocks and declare them as our subnet. Example:

Here, we have broken down our VPC into 4 similar sizes of subnets. But that is not required. We can choose to have any size of the subnet that fits well into our VPC.

If a subnet's traffic is routed to an internet gateway, the subnet is known as a public subnet. 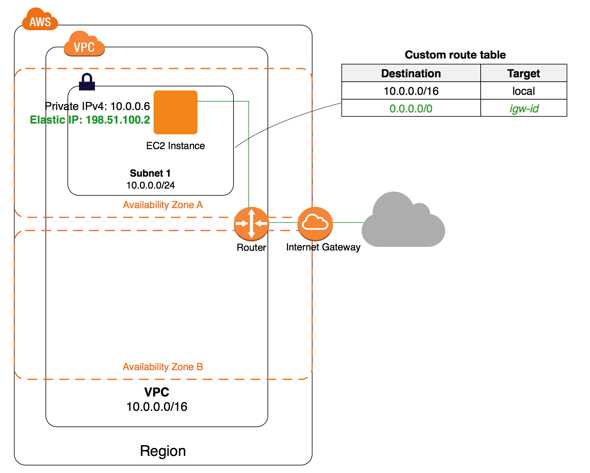 From our previous example, we can attach two internet gateways to Subnet-1 and Subnet-3. Then these subnets will be considered as public subnets. It is recommended to create subnets in multiple availability zones. So, we may create Subnet-1 in Zone-A and Subnet-3 in Zone-B.

An internet gateway is a horizontally scaled, redundant, and highly available VPC component that allows communication between your VPC and the internet.

An internet gateway serves two purposes: to provide a target in your VPC route tables for internet-routable traffic, and to perform network address translation (NAT) for instances that have been assigned public IPv4 addresses.

An internet gateway supports IPv4 and IPv6 traffic. It does not cause availability risks or bandwidth constraints on your network traffic.

If a subnet doesn't have a route to the internet gateway, the subnet is known as a private subnet.

A private subnet is a network to which no internet gateway is attached. So, we won't be able to communicate with the internet from an instance launched in a private subnet. But here is a catch.

From our previous example, we can attach two NAT gateways to Subnet-2 and Subnet-4. Then these subnets will be considered as private subnets. It is recommended to create subnets in multiple availability zones. So, we may create Subnet-2 in Zone-A and Subnet-4 in Zone-B.

You can use a network address translation (NAT) gateway to enable instances in a private subnet to connect to the internet or other AWS services, but prevent the internet from initiating a connection with those instances. For more information about NAT, please see NAT. 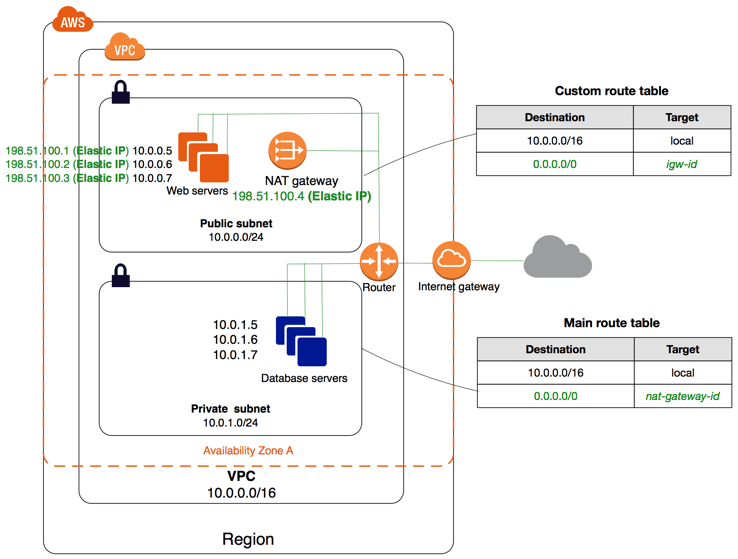 You can use a network address translation (NAT) instance in a public subnet in your VPC to enable instances in the private subnet to initiate outbound IPv4 traffic to the internet or other AWS services, but prevent the instances from receiving inbound traffic initiated by someone on the internet. 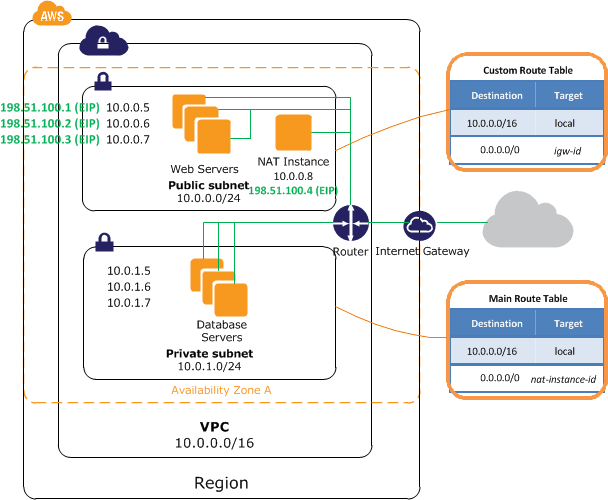 It's a bit of community-made idea, rather than AWS'. An intra or protected subnet is a private subnet to which no NAT Gateway/Instance is attached. This means, it is completely isolated from the internet and no one can reach in/out to the instance of intra subnet.

A route table contains a set of rules, called routes, that are used to determine where network traffic from your subnet or gateway is directed.

A route table is like a tour guide for network traffic. When we send traffic from any AWS resource within our VPC, the traffic follows the route table to reach the destination.

There are five types of route table on AWS at a high level:

Each route in a table specifies a destination and a target.

A route has two major components:

The destination for the route is 0.0.0.0/0, which represents all IPv4 addresses. The target is the internet gateway that's attached to our VPC.

Sometimes, we will see the route as follows:

This is called local route. It is a default route for communication within the VPC.

AWS uses the existing infrastructure of a VPC to create a VPC peering connection; it is neither a gateway nor a VPN connection, and does not rely on a separate piece of physical hardware. There is no single point of failure for communication or a bandwidth bottleneck.

We have already known that resources from one VPC can't reach out to other resources of different VPC. Here comes VPC Peering. It's a network connection between two VPCs.

But only creating VPC peering won't make them able to communicate with each other. We have to create necessary route entries in related route tables.

An example of a route table for VPC-A:

An example of a route table for VPC-B:

A transit gateway is a network transit hub that you can use to interconnect your virtual private clouds (VPC) and on-premises networks. 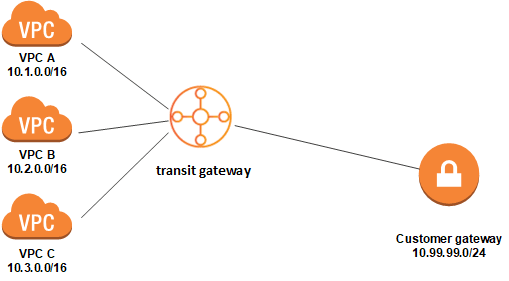 A transit gateway is a regional virtual router with which all of the VPCs are connected and all of them can reach out to each other through this router. This eliminates the limitation of VPC peering. If we use a transit gateway for our previous example, the route tables may look like:

Enough for today. I have taken a lot of words directly from AWS's official documentation and tried to share an overview of AWS VPC with everyone. Long article, I might misinterpret some information. In that case, please don't hesitate to point out. COVID-19 is running crazy, so stay safe.

Originally published at https://blog.maateen.me on July 2, 2020.

ECS: Serverless or Not? Fargate vs. EC2 Clusters