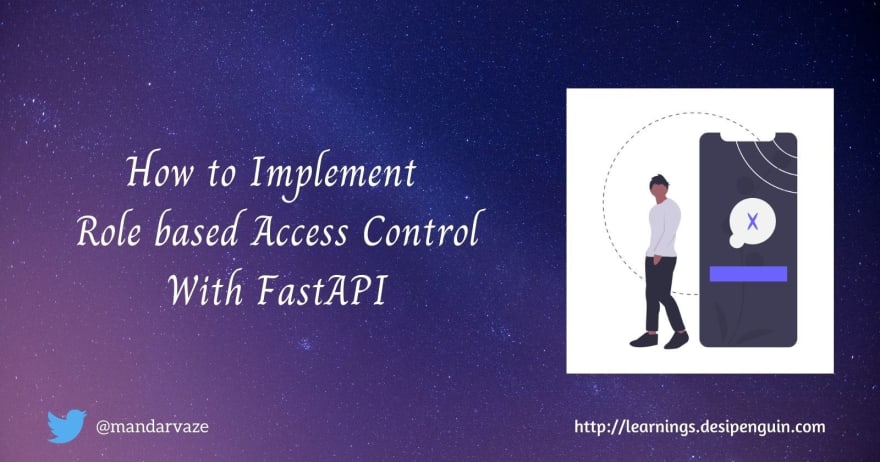 Most of the CRUD apps, require some level of role based access control.

You may have at least two types of users.

More likely you have more levels in between.

This means only the users with specific role can access certain API endpoints
or operations e.g. Allow everyone the GET operation, but only admin can DELETE.
Some levels in-between can create/update etc.

Following code assumes your User model has a role attribute.
It is better to have a default value so that every user created starts
with lowest level, even if role is not assigned when creating.

Let us first define the RoleChecker class as follows:

Then in your routes file use it as follows:

Sometimes you want to allow multiple roles to perform certain operation.
That is why, RoleChecker takes a list of roles like :

Learning (Or how I got here)

If you came here just looking for solution, you can stop reading now.

Read on, to know how I reached the solution, things I tried (and failed)

As you may know, you can get the current user details in the API via
Dependency Injection via user: User = Depends(get_current_user)
See the documentation

So easy first attempt was on the lines of

I extended the above to user.role not in ["admin", "manager"] to allow
multiple roles to perform that operation.

It works for "proof of concept", but we cant be adding similar code everywhere

I needed to pass the list of roles to the function. Unfortunately I could not
call this via Depends. I kept getting Depends has no attribute ... error.

Also, I need to call this from the router decorator function as
dependencies=[Depends(my_func)] rather than in the function param
like user: User = Depends(get_current_user)

Finally another user pointed me to this section of the documentation, and that was that. 🎉

I'm grateful for Marcelo aka Kludex and Danny Rohde on FastAPI gitter for the ideas and help.

Once suspended, mandarvaze will not be able to comment or publish posts until their suspension is removed.

Once unsuspended, mandarvaze will be able to comment and publish posts again.

Once unpublished, all posts by mandarvaze will become hidden and only accessible to themselves.

If mandarvaze is not suspended, they can still re-publish their posts from their dashboard.

Once unpublished, this post will become invisible to the public and only accessible to Mandar Vaze.

Thanks for keeping DEV Community safe. Here is what you can do to flag mandarvaze:

Unflagging mandarvaze will restore default visibility to their posts.