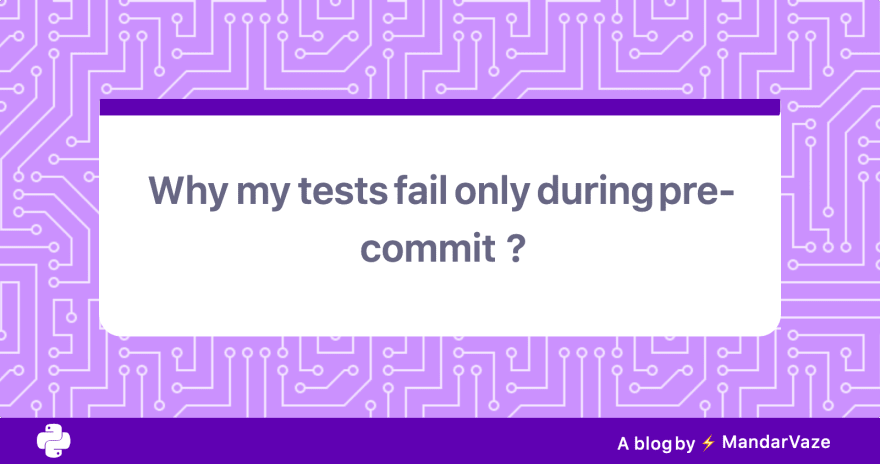 Recently I ran across (what I thought was) strange behaviour.

I use pre-commit for all my git commits, and one of the step is to ensure that
all the unit tests pass.

I also have a make target to run just the unit tests.

Each time when I tried commit, the unit test step in the pre-commit
would fail - which indicates that the unit tests did not pass. But when I run
make unit it would pass. 🤷

During the pre-commit, pytest would return with exit code 5 - which
indicates no tests ran. So it wasn't that one or more tests failed during
pre-commit - but nothing was tested - and due to non-zero exit code,
pre-commit prevented the commit (as it should)

It turns out pre-commit runs all the steps only on the modified files.
It passes the list of modified files to each command - implicitly.
That is, unless you configure it not to. 😀

So when I modify a source file (not a test file) - pytest would "ignore"
the file - since it would not contain any tests.

Now that we understand the "why" - solution is obvious.

Patient : Doctor, it hurts when I do this

For the unit test step, ask pre-commit not to pass the file names as an argument
via pass_filenames: false

Share with me your python automation ideas for your computer

Once suspended, mandarvaze will not be able to comment or publish posts until their suspension is removed.

Once unsuspended, mandarvaze will be able to comment and publish posts again.

Once unpublished, all posts by mandarvaze will become hidden and only accessible to themselves.

If mandarvaze is not suspended, they can still re-publish their posts from their dashboard.

Once unpublished, this post will become invisible to the public and only accessible to Mandar Vaze.

Thanks for keeping DEV Community 👩‍💻👨‍💻 safe. Here is what you can do to flag mandarvaze:

Unflagging mandarvaze will restore default visibility to their posts.