If you're a Linux user, and the desktop environment of your choice is Gnome, you're probably used to letting Gnome Keyring SSH Agent handle your ssh keys. You just log in, your ssh keys stored in your ~/.ssh folder get loaded in memory, and then you can use them not only in terminals but with any process that requires ssh authentication.

Unfortunately, KDE Plasma doesn't have that feature out of the box, so it needs a bit of tweaking to get the same behaviour.

Let's make some changes to Kwallet and add some scripts to start our ssh-agent and load our keys:

Launch KDE Wallet Configuration and make sure the KDE wallet subsystem is enabled. 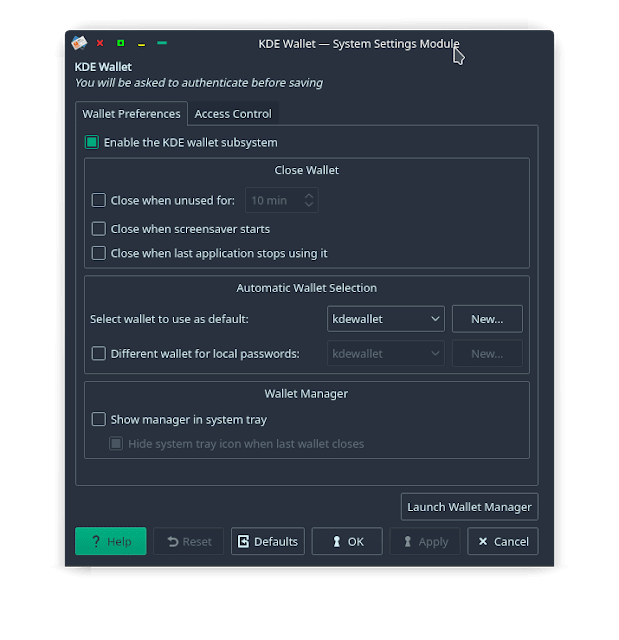 Launch Kwallet Manager and create a new wallet if necessary and set a passphrase for it.

Now we need to create some scripts to start the ssh-agent on startup, add all the keys, and stop it on shutdown. For this, it's necessary to have the package ksshaskpass installed.

KDE has a designated folder for scripts that will be executed at login but before launching Plasma.

In this folder, we need to create a script to start the ssh-agent. Let's call it ssh-agent-startup.sh.

Also, KDE uses another folder for scripts at login.

Let's add a script to load all our ssh keys. We'll call our script ssh-add.sh.

Don't forget to mark the scripts as executables:

And that's it. After rebooting, the system will prompt you to enter your keys' passphrases, and if everything went well, you should be able to use your keys with any process that needs ssh authentication.

Once suspended, manekenpix will not be able to comment or publish posts until their suspension is removed.

Once unsuspended, manekenpix will be able to comment and publish posts again.

Once unpublished, all posts by manekenpix will become hidden and only accessible to themselves.

If manekenpix is not suspended, they can still re-publish their posts from their dashboard.

Once unpublished, this post will become invisible to the public and only accessible to Josue.

Thanks for keeping DEV Community 👩‍💻👨‍💻 safe. Here is what you can do to flag manekenpix:

Unflagging manekenpix will restore default visibility to their posts.