I spend a good amount of my time programming (8+ hours, Monday to Friday at least) with an Ubuntu Linux workstation since 2012. A few years ago, I started to tweak a setup that I thought it was nice to look and reduced eyestrain as much as possible.

(A previous look at my setup was registered in a GitHub repository, but I changed it since then, so here come the new looks!) 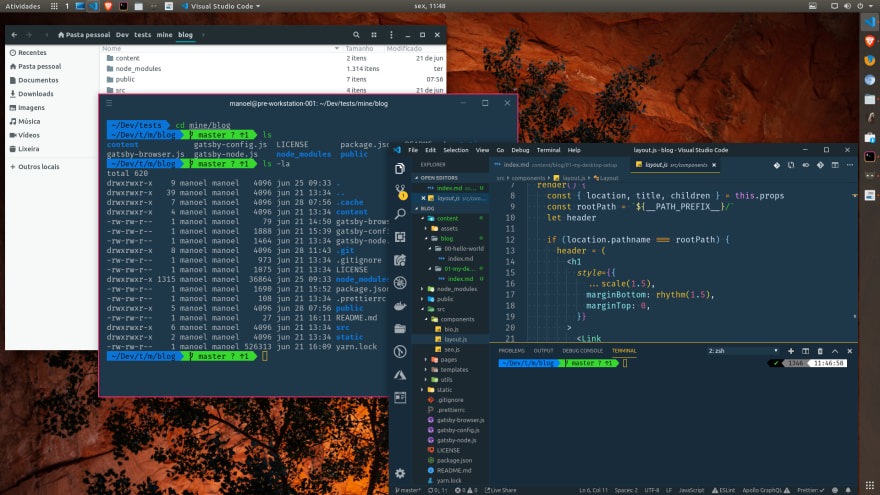 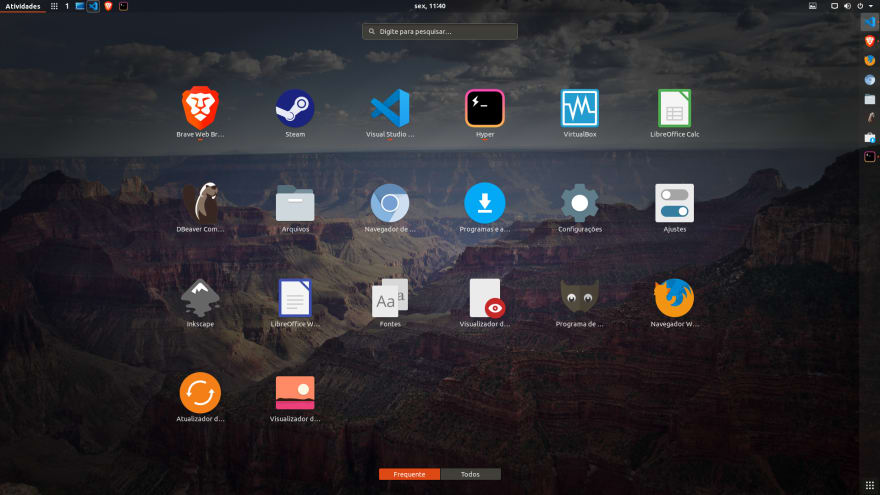 The first step of this quest was to find an editor that I could use for a long time, without too much distraction, a light and fast one, but powerful enough that I hadn't to rely on many other tools to get the job done. IDEs (as Eclipse and NetBeans) were quite powerful but took a long time to initialize and had a lot of visual clutter. So, I passed to the 'lightweight' editors: Sublime Text, Atom and Visual Studio Code. Each of them had its strengths, but I settled for the VSCode for a few reasons: integrated terminal from the start, constant development, nice extension support, good and functional interface, and relative maturity took me to adopt it as my editor.

Besides the helper extensions, I looked for a theme that was nice to look for an entire day. Went through some nice Material-based themes and icons. But really liked Wes Bos' Cobalt2 theme and, more recently, Sarah Drasner's Night Owl.

I also adopted the zsh shell with a few gimmicks, namely the Oh My Zsh framework and the powerlevel9k theme; and also the Fura Code and Space Mono fonts, patched by Ryan Oasis' Nerd Fonts to comply with the PowerShell-like terminal decoration.

Meanwhile, I tested a lot of variations for the Ubuntu desktop (Unity, Kubuntu, Lubuntu, Mate). In the end, I settled down using the default Gnome shell, plus Adapta GTK theme and Paper Icons by Sam Hewitt.

As it is a long list of things, I thought it would be better to split in a few posts, instead of creating a gigantic, tiresome list. This is mostly a reminder to myself of what steps I have to do in case I have to reconfigure my desktop. If you got interested and want to try some/all of my custom setup, be my guest!

For this first part, Ubuntu!

I use the Ubuntu default distro, but make a few adjustments to my taste. For that, I use the Tweaks tool to choose theme and icons that will be installed next (sudo apt install gnome-tweaks if it is not already installed)

It is necessary to add the repository to the system sources list before installing it:

Open the Tweaks tool from the Applications list or from the terminal with the command gnome-tweaks. In the tab Appearance, choose Adapta (or variants) from the GTK+ dropdown, and Paper from the Icons one. Done, you are themed (well, you still need to restart the session).

Hope this first part be useful for someone (for the future me, at least!). See you on the next post!

This post was originally published at my personal blog, manoel.tech

How you can run your first Argo Workflow on K3s ?

[K8s] How to restart Kubernetes Pods

Manoel Thiago Nogueira
I do a lot of things with code. And vice-versa. Full-time dad of twins doing other stuff the rest of time.
Failure & lessons learned
#mentalhealth
Learn in public & save the civilization
#meta
My desktop setup - Part 3: The VS Code