Updated April 1, 2021: The situation as I originally described is no longer an issue, it seems! Read on for more details. The lessons still stand: test in Assistive Technologies, report bugs to browser and AT makers. Makes the world a better place.

While working with the team at DEV this past quarter, they requested I review a PR for accessibility on GitHub that introduced a new Chrome-only CSS feature: content-visibility. I'd missed the announcement of this feature months earlier by Chrome advocates, so my first step was to read up on it to understand the potential accessibility impact.

content-visibility enables the user agent to skip an element's rendering work, including layout and painting, until it is needed. Because rendering is skipped, if a large portion of your content is off-screen, leveraging the content-visibility property makes the initial user load much faster. It also allows for faster interactions with the on-screen content.

This feature is meant to improve page load performance by skipping over content detected as being "off-screen", or outside of the viewport. There are two possible values for content-visibility: auto and hidden.

The Forem PR from Ben Halpern included content-visiblity: auto, which marks content as off-screen that will become visible in the viewport through scrolling, telling the browser to skip it in the initial rendering phase. The hidden value tells the browser to skip content that shouldn't ever automatically render on-screen through scrolling, more akin to CSS display: none or visibility: hidden but with extra performance benefits. Potential use cases cited are advanced virtual scrollers and measuring layout.

Neat. But my spidey accessibility senses went off as soon as I read those words: off-screen and rendering. We use off-screen content in the accessibility world to render content for the purpose of exposing to screen readers, such as visually-hidden headings or <span> elements inside buttons. Screen readers typically utilize the Accessibility Tree, a parallel structure to the DOM that contains only what is rendered on screen and is affected by things like CSS display: none and aria-hidden: true.

My initial thought was that content-visibility: auto could pose an access problem on initial load by suppressing part of the page outline from screen readers, so I set out to test it.

The Web.dev team included a nice demo on Codepen that I used right away, since a local Forem instance requires a more involved setup to mimic the live Dev.to site. I noticed the Codepen authors had marked up .story DIV elements with CSS content-visibility: auto applied, with headings preceding those DIVs (so therefore outside). They'd possibly anticipated an accessibility issue, but didn't originally write about it in the post*.

A Google search turned up two posts from CSS Tricks and Steve Faulkner, but neither touched on the impacts of content-visibility: auto on semantic structure. So here I go, writing about it!

**Update, March 12, 2021:* Google has updated how content-visiblity works in Chrome 90 (see below). Una Kravets also notified me she updated the page on Web.dev to include a note about accessibility.

In earlier versions of content-visibility (Chrome 85-89), headings and other content will be suppressed by content-visibility if considered off-screen. That meant that content would be hidden on load from the Elements List in NVDA and rotor in Voiceover, impacting the overall page outline and summary read aloud.

To test this, I moved an h2 in and out of a DIV with content-visibility: auto applied. When the heading was outside of the DIV like they set it up in the demo, it was rendered. Here's a screenshot of the Elements List in NVDA: 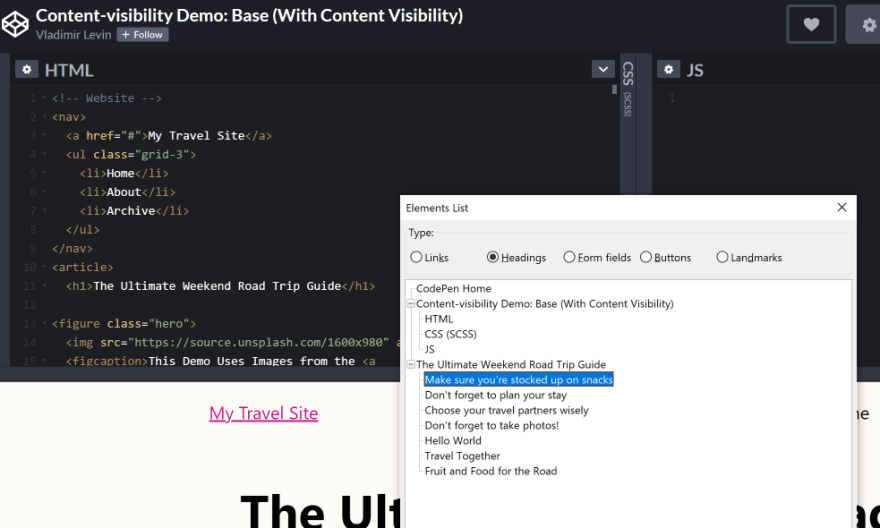 When moved inside of the .story DIV with content-visibility: auto, the heading was suppressed by screen readers including NVDA (as expected): 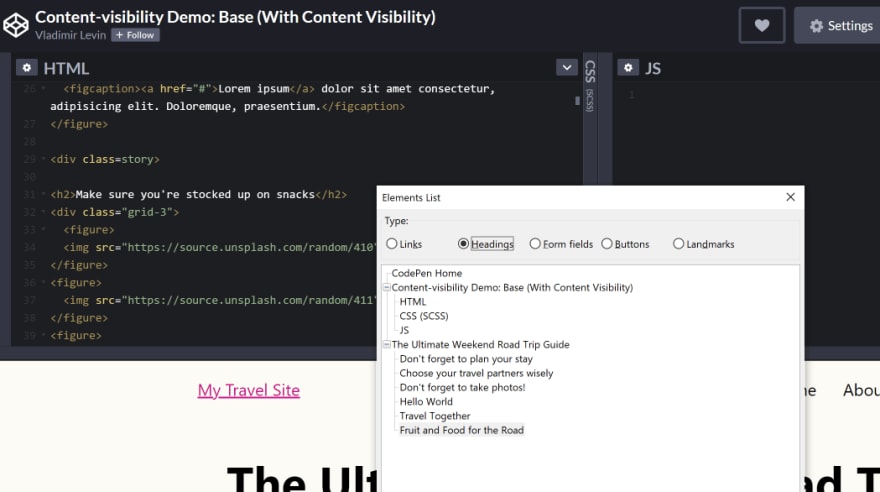 This meant that if you were trying out content-visibility on sections of content including headings and semantic structure, screen reader users wouldn't be able to benefit from that structure on load. This unfortunately degraded accessibility in favor of loading performance until it was fixed, partially due to this post.

Based on my testing, I initially recommended keeping headings and landmark elements outside of regions styled with content-visibility: auto.

Without this approach of crafting semantic markup for rendering on load, as originally implemented content-visibility would negate the purpose of including semantic structure to begin with. It would have required scrolling the page to have a complete and accurate page outline read aloud; likely not what developers would intend by using it! Fortunately this behavior was marked as a bug and fixed.

From the sounds of it, the Chrome team had some discussions along the way about accessibility in content-visibility but the production implementation had some issues. I'm glad to see they've fixed it and are improving their QA process according to Alice Boxhall. It makes me feel for accessibility folks, though. If you don't watch features like a hawk for accessibility, the ball is very often dropped.

Note: the PR from Forem ended up marking only the footer content with content-visibility: auto since it's at the bottom of the page and would theoretically benefit from deferred rendering. But one caveat to the Forem usage was the site's infinite scrolling, where users couldn't reach the footer anyway...so whether that content would be accessible on page load in assistive technology was moot. See the PR for more discussion if you're curious!

Building a To-Do app It has never been easier 🔥

Get Better With CSS By Building These Mini Projects 👨‍💻🦄

Once suspended, marcysutton will not be able to comment or publish posts until their suspension is removed.

Once unsuspended, marcysutton will be able to comment and publish posts again.

Once unpublished, all posts by marcysutton will become hidden and only accessible to themselves.

If marcysutton is not suspended, they can still re-publish their posts from their dashboard.

Once unpublished, this post will become invisible to the public and only accessible to Marcy Sutton.

Thanks for keeping DEV Community 👩‍💻👨‍💻 safe. Here is what you can do to flag marcysutton:

Unflagging marcysutton will restore default visibility to their posts.