I was recently doing a code challenge for a job interview that required me to strip out all nonalphabetic characters. "Ah! I should use Regular Expressions for this!" I thought in triumph, impressed that I even knew what regular expressions were. That fleeting moment of glory faded once I decided to brush up on regular expressions and landed on the encouragingly-named Regular Expressions Cheatsheet. I had no idea how to use it!

So, for people like me, here is our final installment in this series: Cheatsheet for the Regex Cheatsheet, Part IX: String Replacement 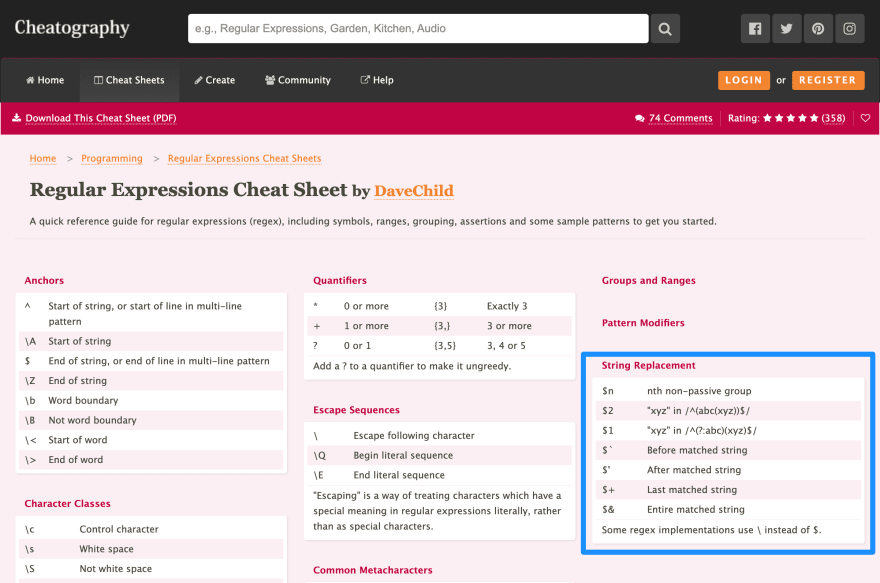 What is String Replacement?

Well, one might assume it's replacing one string with another. But that's not necessarily happening here. To be honest, this last section of the Regular Expressions Cheatsheet is yet another series of expressions to locate text. You can then choose to replace that text...or not. In my humble opinion, String Replacement isn't a particularly great name for this section. More importantly, all of the regular expressions in this section are depreciated. The MDN Web Docs say the following about each regular expression:

This feature is non-standard and is not on a standards track. Do not use it on production sites facing the Web: it will not work for every user. There may also be large incompatibilities between implementations and the behavior may change in the future.

Ok, this explanation is going to take a couple of steps, so bear with me.

$` Before matched string (aka leftContext)

$' After matched string (aka rightContext)

The MDN Web Docs refer to these as RegExp.lastParen and RegExp.lastMatch, but don't really explain how they work. Again, all of these so-called "String Replacement" regular expressions are called out as non-standard, and advise you not to use them. So, maybe it's not so important anyways..?

Analogy | Absence | Example
The way I understand things is in relation to other things: Analogy: what can it be compared to? Absence: what would we have to do without it? Example: how does it work?
My first significant refactoring of a project
#beginners
What's the difference between CSS, SASS, and SCSS?
#css #beginners
The 6 VSCode Extensions I couldn't live without
#beginners

Once suspended, mathlete will not be able to comment or publish posts until their suspension is removed.

Once unsuspended, mathlete will be able to comment and publish posts again.

Once unpublished, all posts by mathlete will become hidden and only accessible to themselves.

If mathlete is not suspended, they can still re-publish their posts from their dashboard.

Once unpublished, this post will become invisible to the public and only accessible to Analogy | Absence | Example.

Thanks for keeping DEV Community safe. Here is what you can do to flag mathlete:

Unflagging mathlete will restore default visibility to their posts.