So I'm currently looking for my next job, and I want to make sure I end up doing something I enjoy, that gives me a decent work/life balance.

In the past I have taken a very haphazard approach to job hunting, and I have ended up accepting roles that turned out to be different from what I expected.

I was very happy to stumble upon Anna Shipman's blog post about how she approached her next level tech job. This post helped to me reflect on what I really value in a job, and how I can best communicate that to recruiters and hiring managers.

Most important: working on an autonomous, small team

"Autonomous" means working on a team with a strong sense of purpose, that is not dependent on external teams or management approval to get shit done.

"Small" means that I can have a good working relationship with everyone on the team, without making a huge effort to get to know people and navigate office politics. I like Amazon's two pizza rule: the team shouldn't be larger than the number of people you can feed with two pizzas.

I think working on an autonomous, small team is the most important thing to me because it allows me to play to my strengths, communicate effectively, focus on what's important, and be myself at work (rather than faking a more extroverted personality).

After working in tech for 10 years, I've found myself doing less hands-on development, and I'm fine with that. There is stuff I like about programming but I think my core strengths lie in problem solving and breaking complex problems down into simpler ones. I want to remain within an engineering team but spend more of my time thinking about what we are trying to achieve, identifying the biggest problems, and coming with strategies for how to tackle them.

I want to use technology for good. I'd rather not work on stuff where the needs of the business are misaligned with the needs of the users. That means I don't want to work for big tech companies like google, facebook, or twitter, where "users are the product".

One of the things I really liked about working at the UK Government Digital Service (GDS) was their focus on users, and getting whole teams involved in usability testing and user research.

Another great thing about GDS was that all the development happened in public repositories with open source licenses.

Working in the open forces you do things properly instead of cutting corners, and removes a lot of barriers to collaborating across teams. Also, as Jake Benlov points out, it means you retain access to everything you work on after you leave. I've followed his suggestion and used it to build a portfolio of my work.

At the very least, I want to work for companies that engage with open source, and let me talk publicly about my work (e.g. by blogging).

I don't want to spend my time outside of work learning things for my job, so I want the organisation I work for to value learning and development and provide time and budget for it.

I'm no longer interested in specialising in a particular technology stack, so when recruiters send me job ads that are nothing but a list of technologies, I just ignore them 🤷‍♂️

Currently, location is not important to me either. I live in London, but I don't have to live in London, and I would be happy to relocate to another city for the right job.

One month and many exhausting phone calls later, I've found my next job!

I considered about 15 different roles overall, although I only ended up applying to 6 of them, because there is only so much time I could devote to interviews and phone calls while still working full time. I tracked my applications in progress using a trello board and tried to make sure I always had a couple of things scheduled.

I tried various ways of finding jobs. Mostly this was reactive (trying to match job specs against my criteria) but I did spend some time proactively thinking about particular industries I would like to work in, and identifying companies that I could potentially work for. 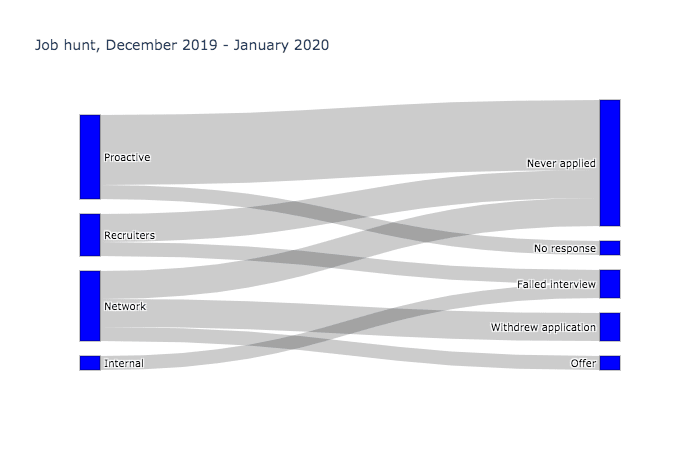 I ended up relying quite heavily on my network of current/former coworkers. I didn't expect this, but I got a ton of help from just letting people know that I am looking, and I am really thankful to those who responded. 😊

How AI chatbots will replace human writers, coders and developers

Mat
A backend engineer interested in improving the maintainability of systems. Currently working in Ruby and Kotlin.
Starting my new job NOT in lockdown
#onboarding #career
Hiring people with the same ideas as you does not generate new ideas
#recruitment #diversity #career