A couple of weeks ago I and my two colleagues from Vincit were having a streamed presentation about "Web development in an hour" in Mimmit Koodaa - This Is Not a Webinar event. In this post, I'm going to open the experience a little bit. If you're interested in the presentation itself or see the introduction of what the whole This Is Not a Webinar event was about, check out my post on how to quickly ramp-up with NodeJS. I've been to many conferences and smaller events before, both as a guest and as a speaker, but never been in one where I can't be in touch with the audience. Judging by this single experience, it's quite a bit different than usual. 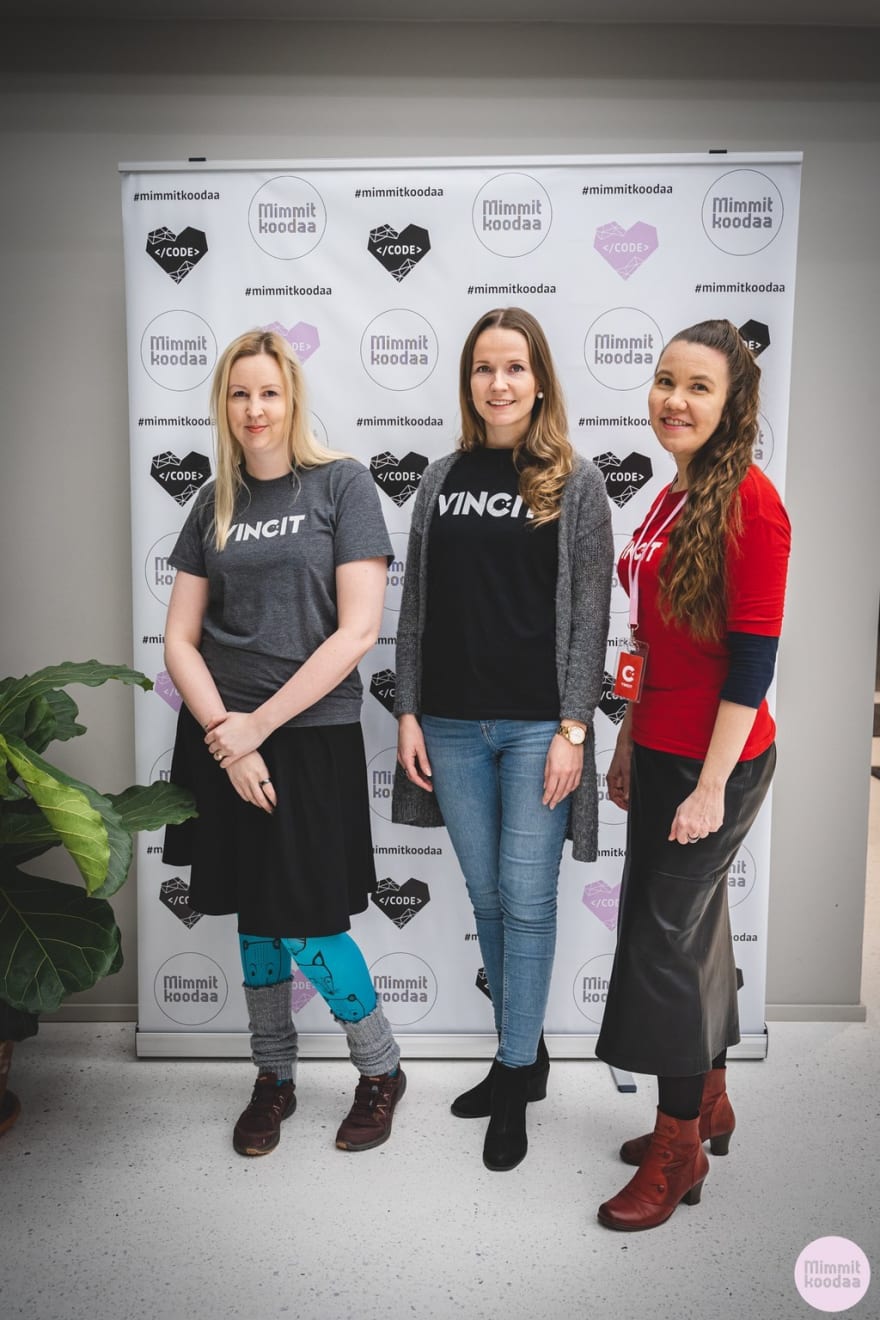 First, we arrived at the venue. Siili Solutions had offered their office for the streaming. There were two studio rooms, as there were two stages with program streaming at the same time. One track was for more technical presentations and the other for some softer topics. There was a strict timeslot to arrive to be prepared in time, but to avoid too many speakers being present at the same time. We were escorted to a nice waiting room full of healthy snacks and drinks. Before our turn, there was some extra time which was used efficiently by photographing us in front of the Mimmit Kooodaa banderol and a few other places. I kind of felt like I've been in a nice gala event and suddenly felt bad for wearing my full stacker sneakers. Yeah, that's me on the left in the pic. 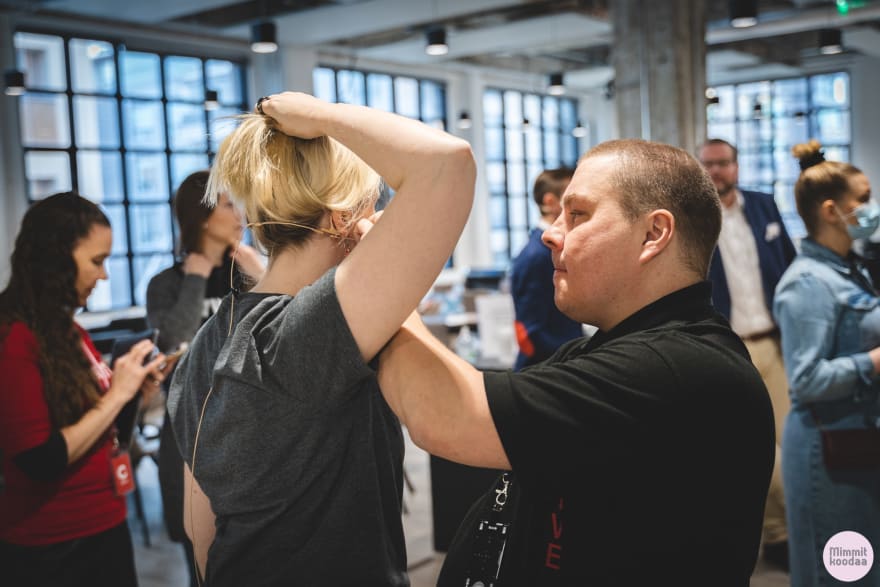 After the photo-op, we were escorted to the studios. Before going in, mics were installed. This was also an interesting operation because I have previously used only a handheld mic, or a one hanging in a stand. My head seems to be an odd-shaped for a head mic since it was not easy to get this stay as it should. I also eventually had to lose my right earring because it was almost guaranteed that it would have been causing some nasty sounds to the stream just by hitting the mic arm. The studio room itself was nice, you can see it in the cover photo of this post. It had some markings on the floor which guided which area is visible in the stream so we had some leeway on where to stand. 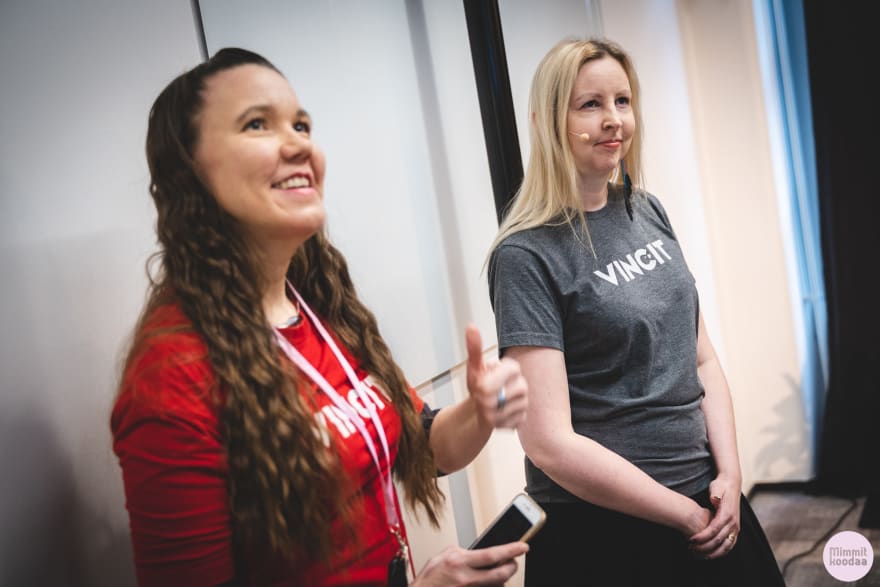 After our introduction, one of my colleagues started her presentation about ReactJS. At that point, I and my other colleague whose part in this presentation was to ask the questions from the stream chat on the Q&A section were waiting for our turn to be on the stage and discovered a horrible surprise. The slide notes were not present at all, we were on our own. You can see from our faces that we were following the situation carefully, but noticed our colleague was doing very well without the notes. This technical problem did not resolve during our whole presentation so I was forced to confront it as well, on my turn, when talking about NodeJS. 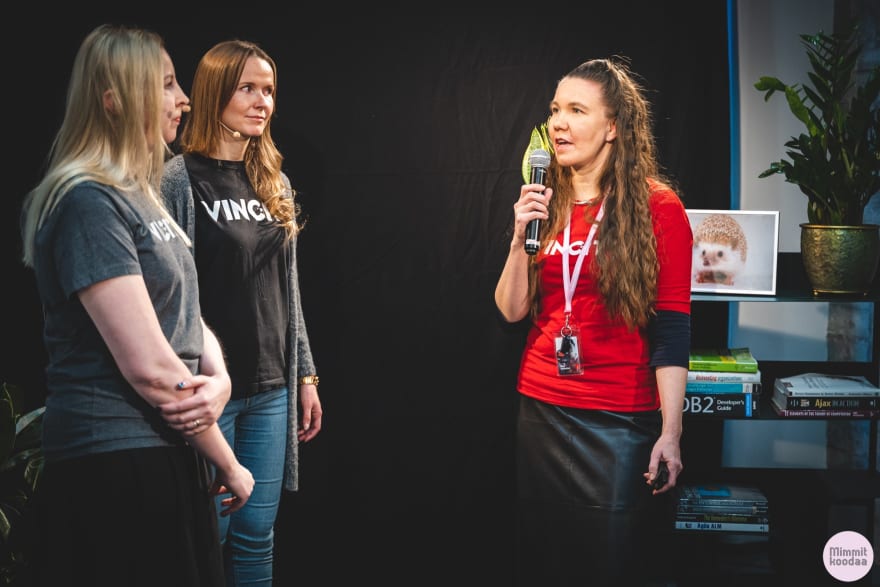 Apparently, I managed to do ok as well. I haven't seen the recording yet (they are coming later, though only in Finnish only, but I try to offer some captions there), but we got a lot of praise for having a clear and understandable presentation. Especially those who were not yet familiar with web development were very pleased that we managed to explain things without too much jargon. I think we covered our target audience pretty well, who were mostly people either changing career path to IT from something else or just otherwise new to IT. Even though afterward it came clear that we did well, I had plenty of doubts during the presentation. The most difficult part for me despite not having the slide notes was that I could not see any of the listeners' faces. I had no idea if they were laughing with me or were they already asleep. I'm excited to see if these virtual conferences and seminars are here to stay or just covering up the lack of physical ones during COVID-19. Anyway, it's always nice to have new experiences, and I would love to hear about yours in the comment section!