Pattern matching is a pretty common action performed on entities in order to check if they follow some pattern or not.

For example, an object representing an animal could have a wings property or not, and thanks to its mere presence (out a value greater than 0) we can know which of them are birds or other flying critters.

And JavaScript is perhaps the most common dynamically typed language. Let's see what's the situation there.

And just as predicted, JavaScript doesn't have native pattern matching. But in the future things might change. But there is a proposal (currently at stage 1 of the process) that aims to introduce pattern matching in JavaScript. When it'll reach stage 4 it will be soon ratified as part of the ECMAScript language (some of you know "JavaScript" is copyrighted by Oracle).

It's quite clear how this syntax would help with the old and trite task of duck typing: we can check for the existence of multiple properties/methods at once, and expresso conditions about their value. It also gives us the benefits of object destructuring!

Unfortunately, this proposal is still on stage 1, and has been like that since late May 2018. This means it could take a while before it will reach stage 3 (when vendors would probably start implementing the proposal), let alone stage 4... if it will reach those stages.

So let's have a look at what we can do for pattern matching in JavaScript today.

Since JavaScript has case statement fallthrough, you can also match against multiple values, but that more often than not is a source of bugs for missing break statements.

The simplest form of pattern matching is also the weakest. It's nothing more than using a key/value pair to find the corresponding value. You can also short-circuit with || or use the new nullish coalescing operator to provide a default value:

This is basically as weak as switch, but surely it's more compact. Then real problem here is that it's good just for static values, as the following approach would execute all the expressions:

At this point the "thing" has been saved, loaded and deleted... and maybe not even in this order!

Well yeah, regular expressions are a way to pattern-match stuff! The bad news is that it works with just strings:

The good news is that .test doesn't throw if you pass something different than a string, and it would also call its .toString method beforehand! So, as long as you provide a way to serialize your objects (like in snapshot testing, if you're used to them), you can actually use regular expressions as primitive pattern matchers:

The ugly news is that it's a rather obscure technique that basically none uses, so... Maybe don't? 😅

The following is maybe the most mind-blowing 🤯

We can use a neat trick with switch so we can use whatever test we want, instead of just equality comparisons! But how?!

Have a look at this:

The trick here is providing true as the comparison value. At runtime, those case statements become all like case false, except the one that becomes case true: and that gives our match.

I think this is very clever, but it has its downsides. First of all, you can't use default anymore, as you'd deal with just true or "not true". (Also, matching against true is just a convention: the expression after case may give whatever value after all.)

But above all, just like many "clever" techniques, it's also quite unexpected and a real WTF-generator. And as we all know, the quality of code is measured in WTFs/min: 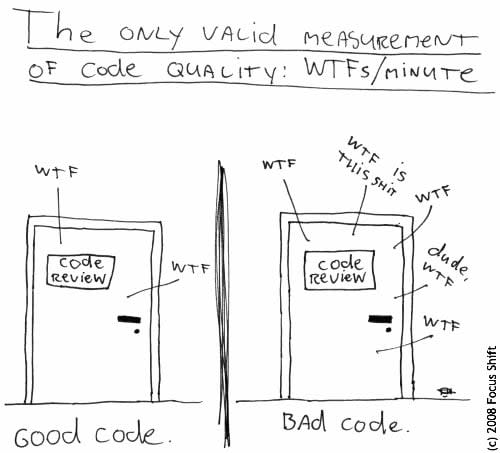 So, yeah... do that if you want to mess with your peers, but don't ship code like that!

I bet many of you folks have used the object mapping, but have you ever used one of the above alternative techniques?