I attended the No Code Conf in San Francisco on November 13, 2019. This blog post is my conference recap. I also added some opinion and history of No Code space.

The main theme of the conference (in my opinion) was: the are millions of people who want to create and build solutions but they don’t know how to code. No Code will allow these folks to build applications without code. No Code allows to focus on customer experience and value, not on servers. No Code is going to democratize software development.

I know this is a lot so let’s unpack this.

Today there about 24-25 millions developers in the world which means only about 0.3% of people today know how to create software, invent new things. 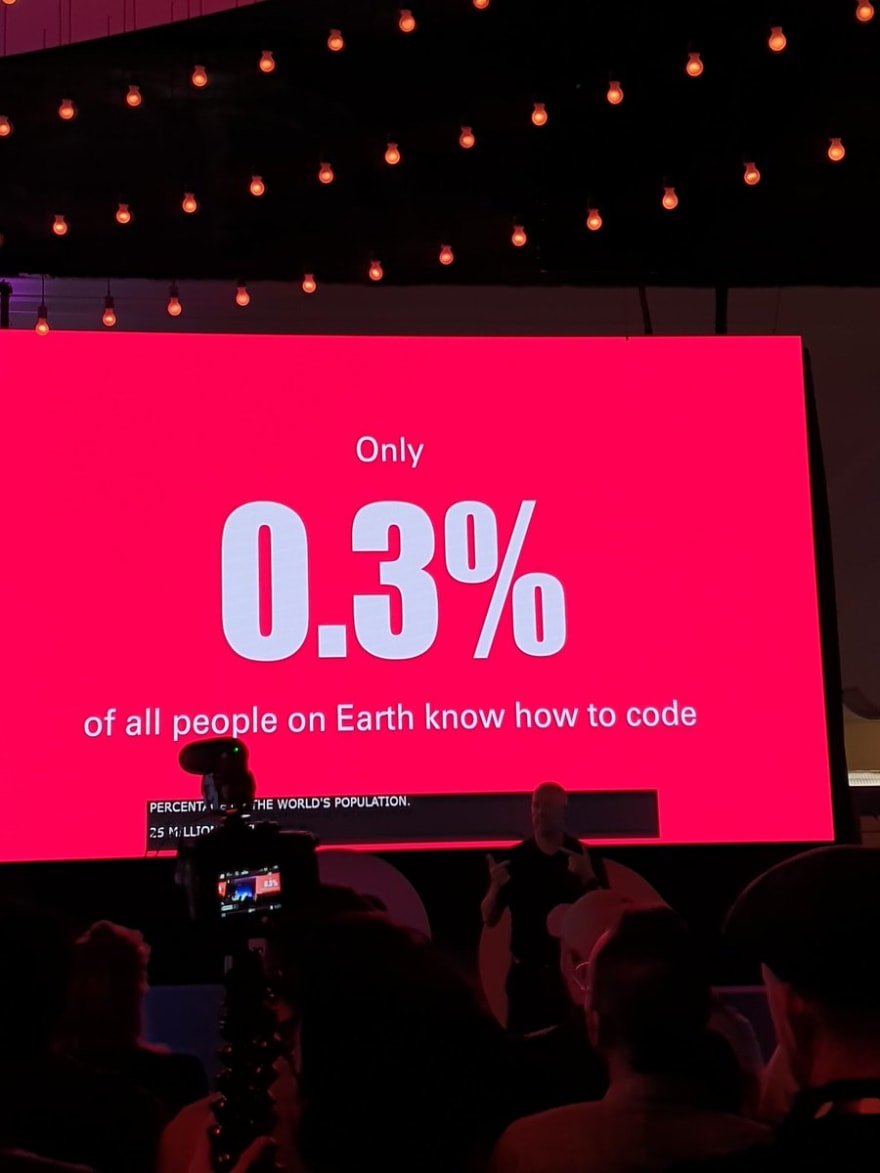 Imagine if millions more people, who are not coders, could create and build software, invent new things. We would have awesome new services, products and markets that we probably don’t even imagine today. So that’s exactly the promise of No Code. Before we dive more into that, Vlad Magdalin, Co-founder and CEO of Webflow (the main sponsor behind the conference) gave a number of examples where once people were able to “to do” something new, that space grew very fast.

Numbers of books published through the course of time. As more people knew how to write and more importantly now able to self-publish books, the number of titles skyrocketed.

Another example is music. In the pat you had to find an agent, a recording studio. Both are very expensive. Today you can publish music from your home and make it available on a platform like Spotify.

Another example Vlad gave was movies. In the past you needed access to a movie studio which cost a lot of money. Today you can film a movie yourself using your phone and publish it on YouTube.

The main point is that once people gained tools they didn’t have before, they started creating, building and inventing new things that were not possible or imaginable before.

Some folks might say let’s have everyone learn how to code. This is absolutely one way to partially solve this problem. A lot more people have been learning how to code by attending various coding schools and on their own. And this is awesome! But, learning how to code takes time and not really scalable. The demand for people who know how to build software is outpacing the supply of people who know how to build software.

It’s easier than ever to learn how to code today, at the same time, the actual skill of learning how to code becoming harder and harder. In the past you had to know HTML, JavaScript, CSS and Java or .Net. Today there are hundreds of front-end frameworks and as many back-end frameworks and you also need to know how they all integrate.

But complexity and making things easier is not new of course. Vlad gave a few examples where once things were “complicated” and got much simpler:

Aside from teaching people how to code, we need to invent a radically more inclusive way of creating software.

And that’s exactly where No Code can help. No Code allows virtually anyone to create and build new solutions, without needing to know how to code. No Code democratizes software development.

No Code tools (in this case Webflow) can hide all the complexities of all the frameworks and tools you would need to know otherwise:

So now we can add one more shift:

The No Code space is growing fast and has these wonderful companies (and there are many more):

Vlad also showed some of the companies that have deployed No Code solutions:

No Code means being a lot more productive

A panel discussion followed the keynote where similar theme was brought up. No Code is a major platform shift, similar in scale to previous shifts:

and then next shift is, which is still at the very early stages:

Giving power to business folks, marketers, designers who can use No Code — is very powerful. And No Code is no less technical, it simply means being a lot more productive. 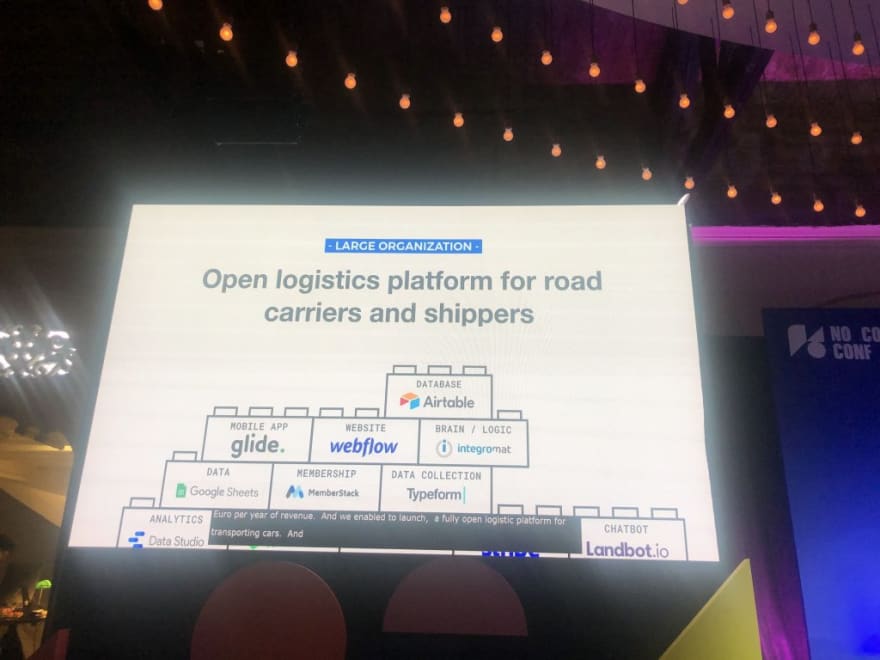 Of course there are also some challenges with this approach. There was little discussion what happens when one of these services (building blocks) stops working or goes out of business. Most No Code services are startups today. The more different services a solution uses, the higher the risk of failure. I hope this will be discussed more as the space continues to grow. I also would like to see more real world No Code solutions in deployment.

Focus on customers, not servers

One of the last talks was from Bryant Chou (CTO & Co-founder at Webflow). Bryant said that No Code allows to focus on customer experience and the value that a solution brings and not on servers and infrastructure. He shared the infrastructure behind Webflow and how scalable it is which allows the No Code creators to focus building awesome products. 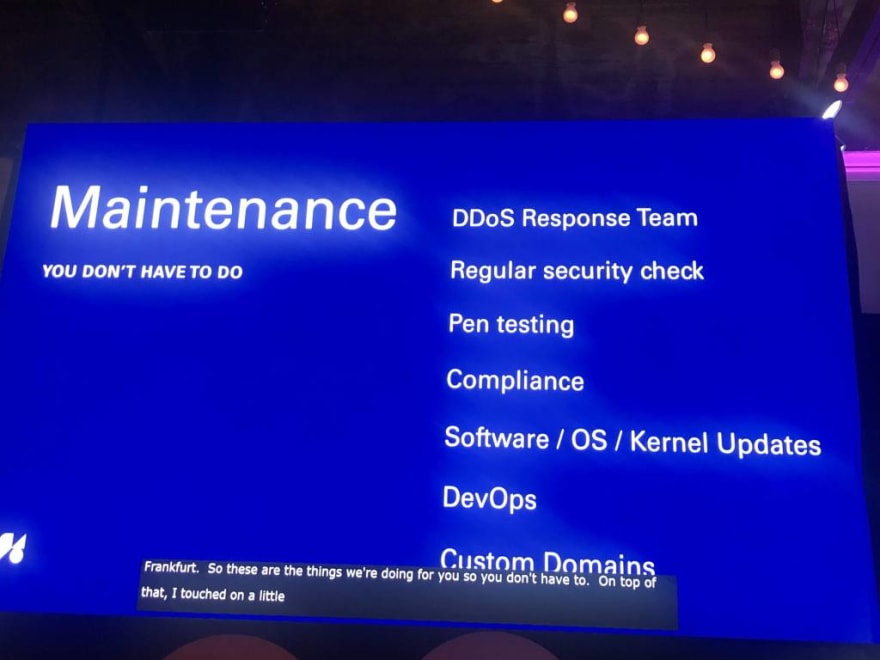 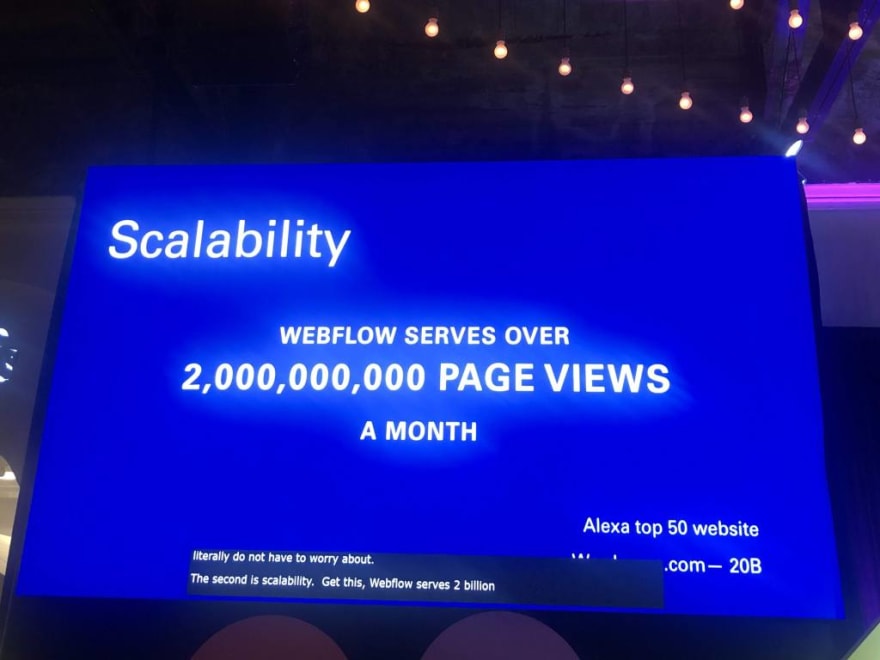 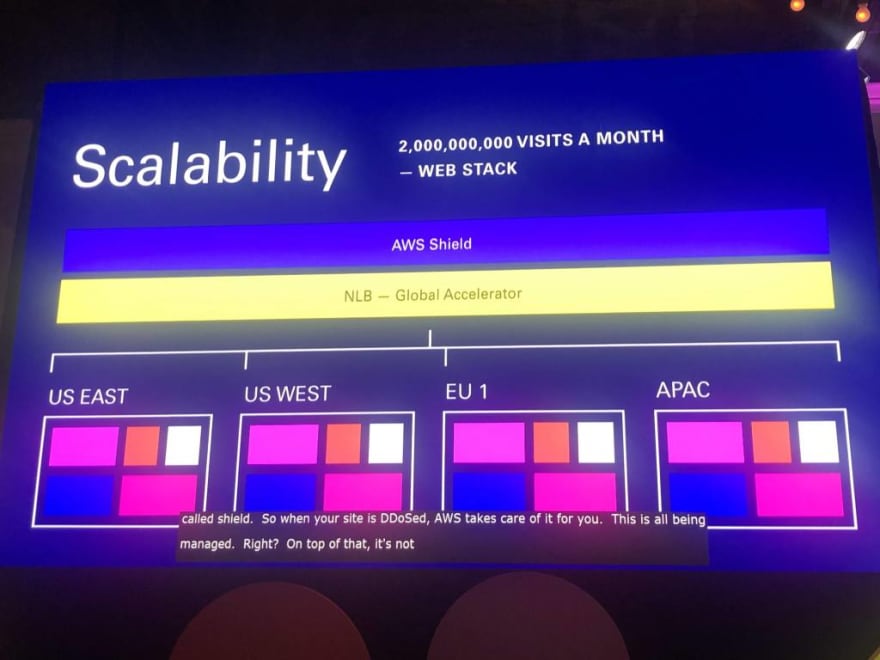 I completely agree with this message. Servers and infrastructure are not a differentiation (unless you are a big cloud provider) and the real value is what you build on top of that.

Bryan shared the new Customer Experience (CX) stack. It shows that you can build awesome solutions with various No Code building blocks, connecting and stitching them together. And again, this stack allows you to concentrate on your solution, the real value and not servers. 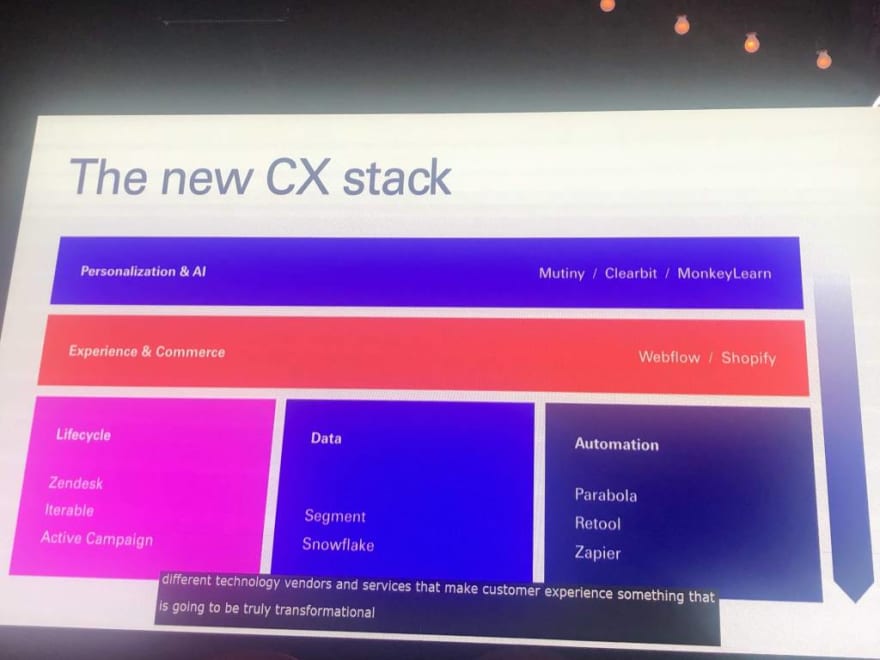 If you are familiar with the Serverless space, then the message there is very similar, focus on the code, don’t worry about servers.

No Code is not new

No Code or visual development is not new of course and various visual development services tools existed as early as early 1980s. Before joining IBM, I co-founded Appery.io. Appery.io is a Low Code platform for building mobile applications with a back-end. Low Code is similar to No Code but does allow to write code to customize the app and integrate with other systems. I searched my blog and found that the very first mention of Appery.io (back then known under a different name) was in June 2010.

So why there is so much growth and interest in this space? There are number of factors. One of them likely we reached a point where the new No-Code tools are sophisticated enough and flexible enough to deliver real value. The browser is also now powerful enough to be able run visual creation tools.

I also think that in the past most No-Code/Low-Code tools tried to enter the enterprise market first. Enterprises were skeptical of these tools, they didn’t believe these tools can build anything real and also had very strict requirements. Also, many developers were probably threatened by the notion of “no code”. I believe this new resurgence of No-Code tooling approach somewhat different. Many companies are trying to target designers, agencies, people who want to launch a business, marketing and business people. Vlad and I chatted a little bit about this during the conference. That’s not to say that there are no No Code/Low Code tools targeting the enterprise such as OutSystems and also more specialized tools like Node-RED.

Another interesting factor I think, people who have been entering the workspace for the past 10 or so years are very comfortable with technology and buildings things. This can be another factor why the No Code tooling space has reached this point.

You will often hear that No Code will make it possible to build software faster and easier, and that’s true of course. Looking at the history of software, that’s the promise of every new technology, framework, library and programming language. The goal of every new framework, library and programming language is usually to allow to build software faster, easier, to hide the complexities and to allow to concentrate on app logic (instead of low level details). So nothing is new here.

Overall this was a superb conference. The space was beautifully designed with different sections for people to hangout such as coffee bar, makers space, and introvert space. The food was delicious. There was also a Demo Theater (referred to as Drive-In) with short talks during breaks. Ben Parker (below) is doing a demo. Ben is also a co-host of a new Visualdev.fm podcast that I highly recommend. It’s a wonderful podcast about everything No Code.

I think the Drive-In reference is because the space where the conference was held was a former Honda dealership (and thus the car). 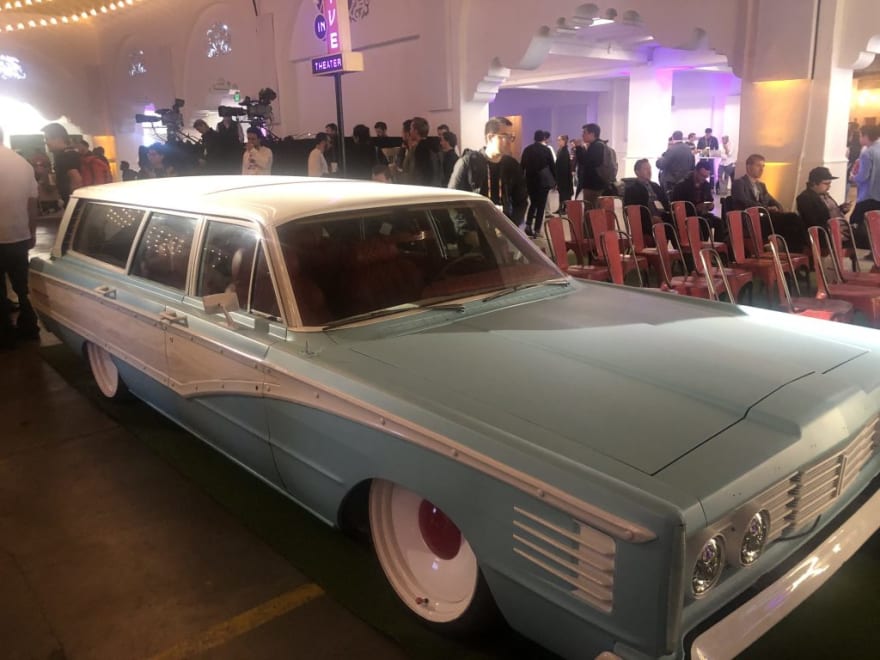 It was a really great conference. Thank you Webflow 💜. The entire conference was live-streamed so you can watch the replay here. I’m looking forward to next year.

Once suspended, maxkatz will not be able to comment or publish posts until their suspension is removed.

Once unsuspended, maxkatz will be able to comment and publish posts again.

Once unpublished, all posts by maxkatz will become hidden and only accessible to themselves.

If maxkatz is not suspended, they can still re-publish their posts from their dashboard.

Once unpublished, this post will become invisible to the public and only accessible to Max Katz.

Thanks for keeping DEV Community 👩‍💻👨‍💻 safe. Here is what you can do to flag maxkatz:

Unflagging maxkatz will restore default visibility to their posts.