HTTP is hyper text transfer protocol which is one of the most popular protocol in the internet. HTTP works on request and response cycle from client to server and server to client. Every request is independent of other and hence it is also called as stateless protocol. Let’s understand the format of HTTP request and HTTP response.

Now, lets talk about HTTP request methods. Following are HTTP request methods using them you can interact with server over HTTP.
GET : to get resources from server.
POST : to send resources to the server.
PUT : to send data to server to update existing resource.
HEAD : to get resources from server without response body. Only request-line and request-header will be fetched.
DELETE : to delete specified resource in the server.

Request headers are in the form of key-value pairs. Request header is nothing but metadata of entire request.

The HTTP requests messages can be of type depending upon what you specify in HTTP header content type. They can be json, url-encoded, form-data, XML, text, etc.
Now, let’s understand what is the format of HTTP response.

Installing Express over the Node.js is simple. Click here to see how to install. 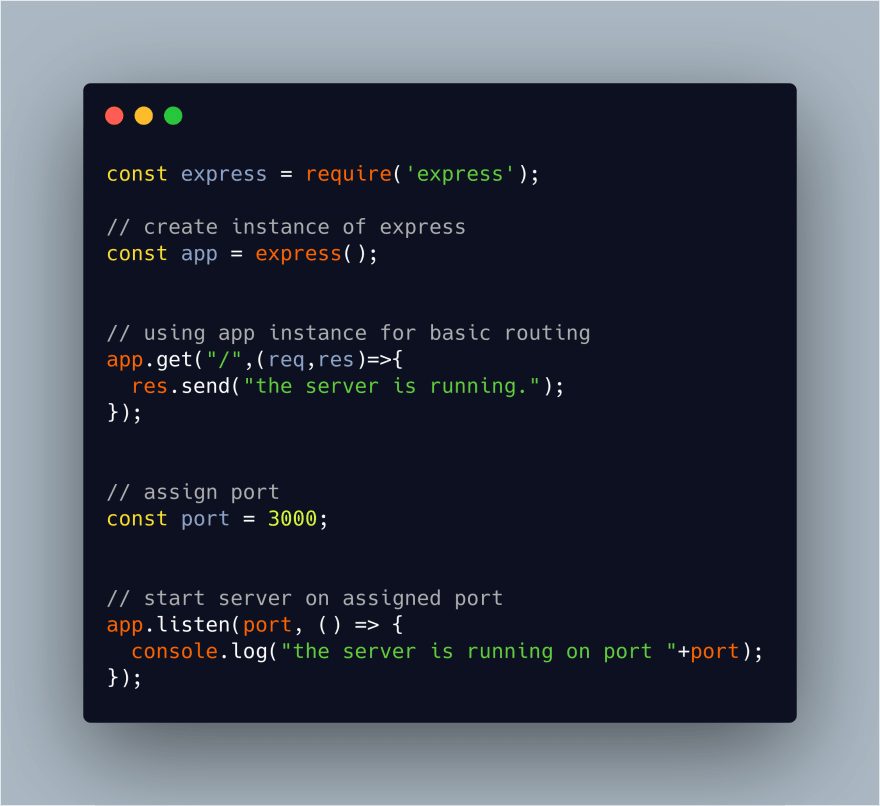 Above code is very much self explanatory.
‘app’ instance can call the various methods in express library. These methods include HTTP requests( GET, PUT, POST,DELETE,HEAD), use(), listen(), etc. Also if you include any third party libraries, ‘app’ instance will execute their methods too.

Structure of Callbaks in Express

req and res parameters in callback function are request and response in HTTP which we discussed in the first part.

As clearly mentioned on official website, ‘express is routing and middle-ware web framework.’ Handling middleware is one of the core functionalities of Express.

In simple language, whatever functions are written in between request-response cycle, they are known as middleware functions. Notice ‘next’ keyword which is necessary to pass the execution from one middleware to another. This keeps cycle running otherwise you will get error. Now, one thing to note here — In custom middleware from third parties, you need not to write next() because it automatically includes it from their source code.

Following are some of the types of middleware and there names are self explanatory. When building large scale applications, we can include these middleware in above server code.

You can learn a lot by reading official docs on express.

Now, let’s write simple middle-ware so that you can get basic idea about how does the middle-ware works? I’ll include the code in above written code and Then run the server.

After running the above code, we get the following output on route “/” which is starting point of web app.

Then, we get following output on route “/client”. Here, first, client pass the execution to the middleware. You can see in the console. There will be message “the middleware is running”. After it’s execution the client will run and we can see output in the browser.

The best programming languages ​​for web development in 2021

Why We Should Use Videos On Our Landing Pages