One of the common points of friction in GraphQL-land is making sure resolvers are conformant to specs. There are three main strategies I've seen to do this:

They all have their disadvantages:

I'd like to talk about a different strategy: generation of resolver types.

The basic idea is that you have a schema, and the compiler uses the schema to generate the type of your resolver. That way, when the schema updates, the code no longer compiles, and getting the code to compile makes it schema-conformant.

This strategy is possible in any strongly-typed language. For example, in TypeScript, GraphQL code generator will generate a resolver type that looks like this:

This is already a vast improvement, but it still has a few issues:

What is compile-time generation of types?

Compile-time generation of types means using the compiler to generate one type from another type. While that many sound a bit strange, there's nothing about it that's conceptually different than generating one value from another value. In programming, for example, we can do:

At the type-level (switching to PureScript) this becomes:

Here, we've the same toString function in JavaScript for free, and in addition, we've gotten a compile-time validator forceString. To see why, let's look at what happens when you use forceString with anything other than a string. 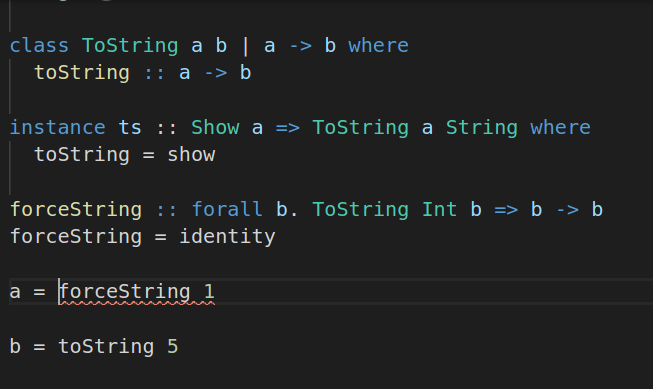 If we hover over it, you'll see that the compiler has "solved" what forceString must take. 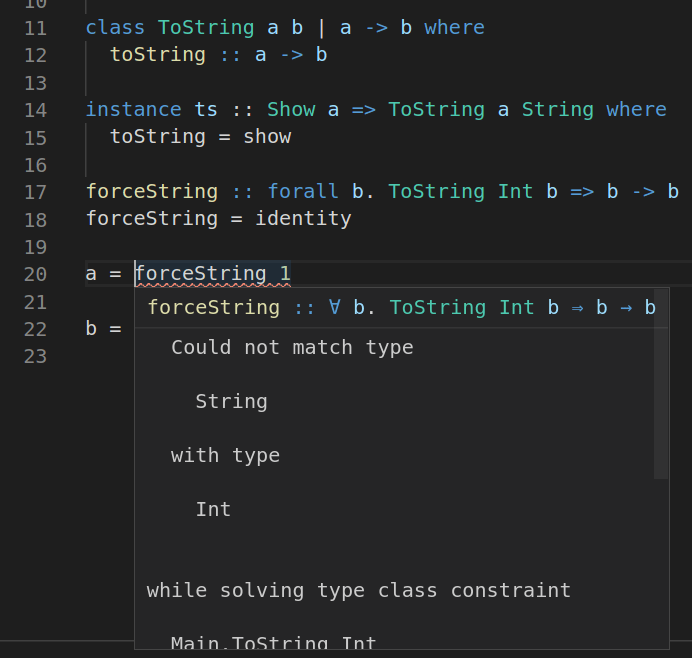 Using ToString, we've pulled a type out of thin air. If you look at forceString, nowhere in the definition does it say b must be a String. The compiler figures it out from the implementation of ToString.

In the same way, the compiler will figure out what type our GraphQL resolver needs to be from our GraphQL spec.

In the following example, we'll use purescript-typelevel-parser to turn symbols into types. In PureScript, Symbol is a kind. A kind is just a family of types. The types that inhabit kind Symbol are every unicode string. Thankfully, the binary of the PureScript compiler doesn't contain every unicode string (that'd be a pretty big compiler!). The compiler creates a type for each unicode String on-the-fly. So the type "a" is of kind Symbol just like the value "a" is of type String.

Instead of GraphQL, in this example, we'll use a spec called TypeQL. This (fabricated) spec is a series of lowercase strings separated by &. The general idea is that it defines keys that point to a type. Keys of what? Who knows! Perhaps a dictionary, perhaps a database - that's for us to decide when we implement the spec. What type do the keys point to? Who knows! Perhaps Int, perhaps String.

One example would be gold&silver&bronze pointing to Int, another would be earth&wind&fire pointing to Boolean. Like a GraphQL spec, our TypeQL spec doesn't mean anything. It is just a container of information. Our program will give it meaning, just like a GraphQL resolver gives a spec meaning.

An engineer has been tasked with taking a TypeQL spec and creating a PureScript implementation that can work for any type. So, for example, if we get a spec earth&wind&fire, then we want to be able to automatically generate a type { earth :: a, wind :: a, fire :: a }, where a can be any type (Int, String, etc).

Let's start with some imports.

The next step is defining a parser. In most cases, you never have to actually write a parser as it is done for you (ie Apollo parses GraphQL). The same will be true of our GraphQL parser in the next article, but I want to show you how it's done so that you can follow a full example

Using the primitives of purescript-typelevel-parser, we define a list of lowercase values separated by the separator & that accurately describes the TypeQL spec.

Once we have a parser result, we need to define how it translates into a type that our application understands (continuing in GraphQL-speak, we need to define the type of our resolver). In this case, we will take the parser result and turn it into a row where every key points to something of type i. For example, foo&bar&baz with type Int will turn into a type { foo :: Int, bar :: Int, baz :: Int }.

Let's imagine that we now add a language (say purescript). Our spec becomes python&java&javascript&purescript. What happens to languages? Let's see!

As we hoped, the compiler gets angry. 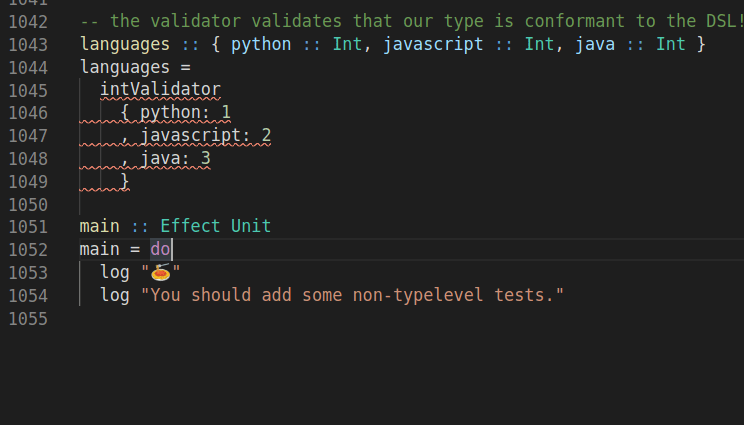 But, because it deep down the PureScript compiler is nice, it gives us a helpful error message letting us know what we did wrong. 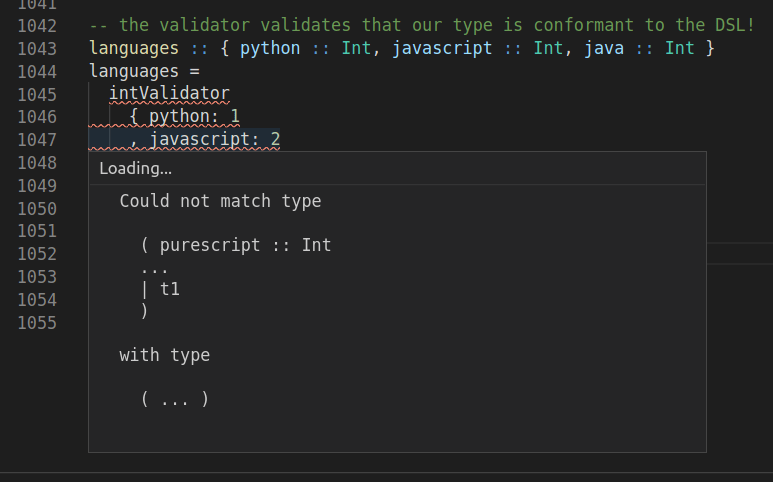 Now we can fix it!

Conclusion and next steps

In this article, I've shown how typelevel-programming allows you to take a spec (ie TypeQL) and use it to generate a type. We use the type to create a validator that makes sure our code is always conformant with the spec. It's also allowed us to use custom business-logic (in this case, using Int as the indexed type of our record).

In the next article in this series, which will come out in mid-September 2020, I'll show how this strategy can be used to build type-safe GraphQL resolvers. In the meantime, if you're building a GraphQL API, you should sign up for Meeshkan! We do automated testing of GraphQL APIs. Our novel approach combines functional programming and machine learning to execute thousands of tests against your GraphQL API and find mission-critical bugs and inconsistencies. Regisration is free, and don't hesitate to reach out - we'd love to learn more about what you're building!

Creating a Proxy for your GraphQL Server

Trying your luck with Elm

Meeshkan is an automated testing service for your GraphQL API that executes and reports on a collection of dynamically generated tests that actually keep up.

Test it out!
Reviving the Dhall API discussion
#dhall #graphql #rest #api
Four reasons that PureScript is your best choice to build a server in 2020
#purescript #rest #openapi #graphql
When to start thinking about QA
#qa #testing #graphql #api

Once suspended, meeshkan will not be able to comment or publish posts until their suspension is removed.

Once unsuspended, meeshkan will be able to comment and publish posts again.

Once unpublished, all posts by meeshkan will become hidden and only accessible to themselves.

If meeshkan is not suspended, they can still re-publish their posts from their dashboard.

Once unpublished, this post will become invisible to the public and only accessible to Mike Solomon.

Thanks for keeping DEV Community 👩‍💻👨‍💻 safe. Here is what you can do to flag meeshkan:

Unflagging meeshkan will restore default visibility to their posts.