Welcome back! Excited to have you in this journey with me!

There are 4 parts in this series:

In the last article, we covered the basics of Promises. Now we are learning something a little bit more advanced!

Here's a quick recap from the last article, we learned:

With the knowledge above, in this article, we would cover chaining promises and fetching multiple promises.

Now that we learned about handler methods, it is time to put them in a more practical example. We usually see multiple .then in a promise as we want to do more things. Do you still remember one of the asynchronous callbacks: network request from Intro to Asynchronous JavaScript (or if you didn't read the article, that's fine too!)?

We are going to use that and make it a promise and we'll use our handlers in this example. Fetching data/third-party API is pretty common and we usually fetch data asynchronously.

We will use Fetch API, which is registered with the fetch() method. You may wonder why fetch(). fetch() not only is very similar to our old friend XMLHttpRequest, but also starts a request and returns a promise. Therefore, you'll see fetch() in a lot of articles related to asynchronous programming in JS, including this one.

Without further ado, let's see how it works!

Note: If you want to code along, please create a new HTML file, add a <div id="main"></div> and attach <script> at the bottom of the HTML <body>!

As we can see above, it is not returning above but a pending promise. As we are making an HTTP request as an asynchronous operation, fetch will not return any data.

Step 2: Next, we'll use the .then method to attach a callback once our promise is fulfilled!

Step 3: Knowing that the response works (i.e. the promise is fulfilled), we want to return this response in json() method. As json() is also a promise, we would need to create a promise chain for this:

After you refresh your browser and when you check your console, now it returns all the characters from the API: 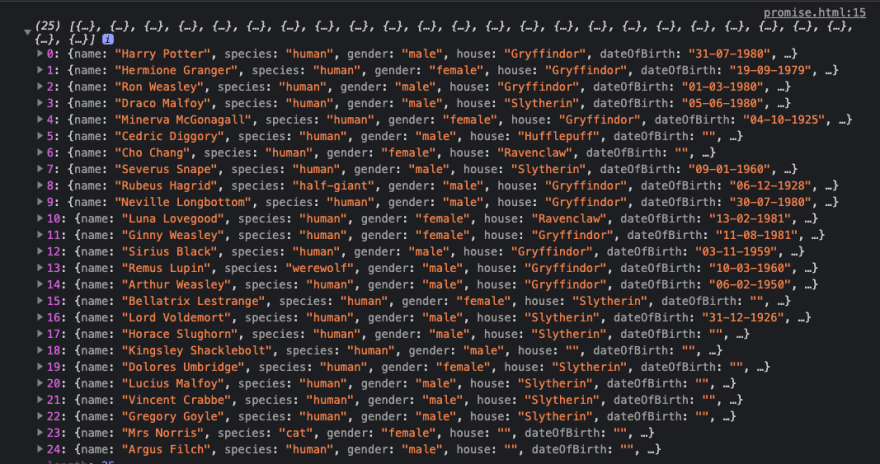 Step 4: Now that we have all the characters, I will create another function to map the character's name one by one with another and to print all the names onto our web page:

With all that combined, you should see this (please ignore the ","): 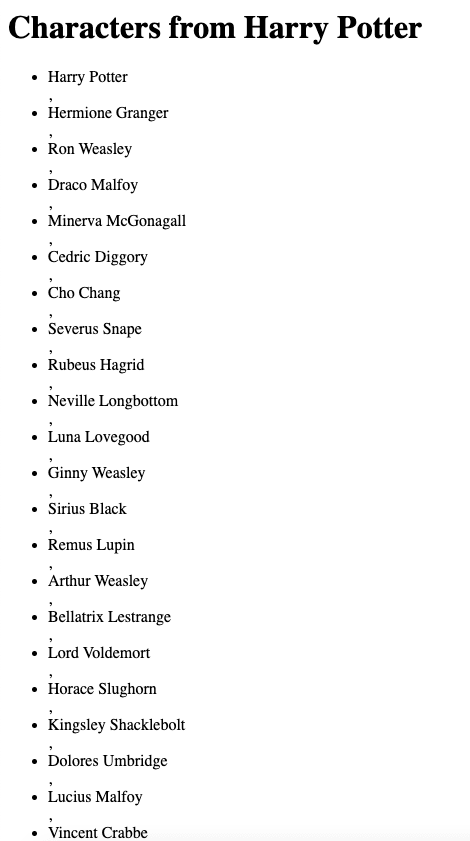 Last but not least, let's go ahead and add .catch handler, in case any errors with our promise:

There you go! You got all your Harry Potter characters on your web app. You can play around by adding images, houses, etc.!

Now that we learned about chaining promises, let's switch the gears a bit! There is a possibility that we have to fetch multiple promises. Let's see how it's done in the next section.

Promise.all is the most common in practice, therefore I will only cover this in this article.

Q: When would we use Promise.all?
A: When we have multiple promises to execute in parallel. Examples like fetching multiple URLs in parallel and process the content.

Promise.all takes an array of promises and returns a new promise. Let's how it looks like with setTimeOut():

There you go! This is more like a high level of slightly advanced Promise knowledge, but hopefully you get the gist of what Promise chaining is like, as well as fetching promises!

Next up, we'll discuss the newer asynchronous operator: async/await!

To make up the lack of the MCU GIF in this article...

Once suspended, mehmehmehlol will not be able to comment or publish posts until their suspension is removed.

Once unsuspended, mehmehmehlol will be able to comment and publish posts again.

Once unpublished, all posts by mehmehmehlol will become hidden and only accessible to themselves.

If mehmehmehlol is not suspended, they can still re-publish their posts from their dashboard.

Once unpublished, this post will become invisible to the public and only accessible to Megan Lo.

Thanks for keeping DEV Community 👩‍💻👨‍💻 safe. Here is what you can do to flag mehmehmehlol:

Unflagging mehmehmehlol will restore default visibility to their posts.