Services and networking — from ClusterIP to Ingress

As you are making your way through all the stages of your app’s development and you (inevitably) get to consider using Kubernetes, it is time to understand how your app components connect to each other and to outside world when deployed to Kubernetes.

Knowledge you will get from this article also covers “services & networking” part of CKAD exam, which currently takes 13% of the certification exam curriculum.

Kubernetes services provide networking between different components within the cluster and with outside world (open internet, other applications, networks etc).

There are different kinds of services, and here we’ll cover some:

NodePort service maps (exposes) port on the Pod to a port on the Node. There are actually 3 ports involved in the process:

Linking pods to a service

Selectors are the way to refer (link) service to certain set of pods.
As set of pods gets selected based on the selector (in almost all cases, pods from same deployment), service starts sending traffic to all of them in random manner effectively acting as load balancer.

In case of application consisting of multiple tiers deployed to different sets of pods, way to establish communication between different tiers inside the cluster is necessary.

For example, we have:

Each of above mentioned 18 pods have their own distinct IP addresses, but making communication that way would be:

ClusterIP is default type of service, so if service type is not specified, k8s assumes ClusterIP.

When this service gets created, other applications within the cluster can access the service through service IP or service name.

In short, LoadBalancer type of service is provisioning external load balancer in cloud space — depending on provider support.

Deployed load balancer will act as NodePort, but will have more advanced load balancing features and will also act as if you got additional proxy in front of NodePort in order to get new IP and some standard web port mapping (30666 > 80). As you see, it’s features position it as the main way to expose service directly to outside world. 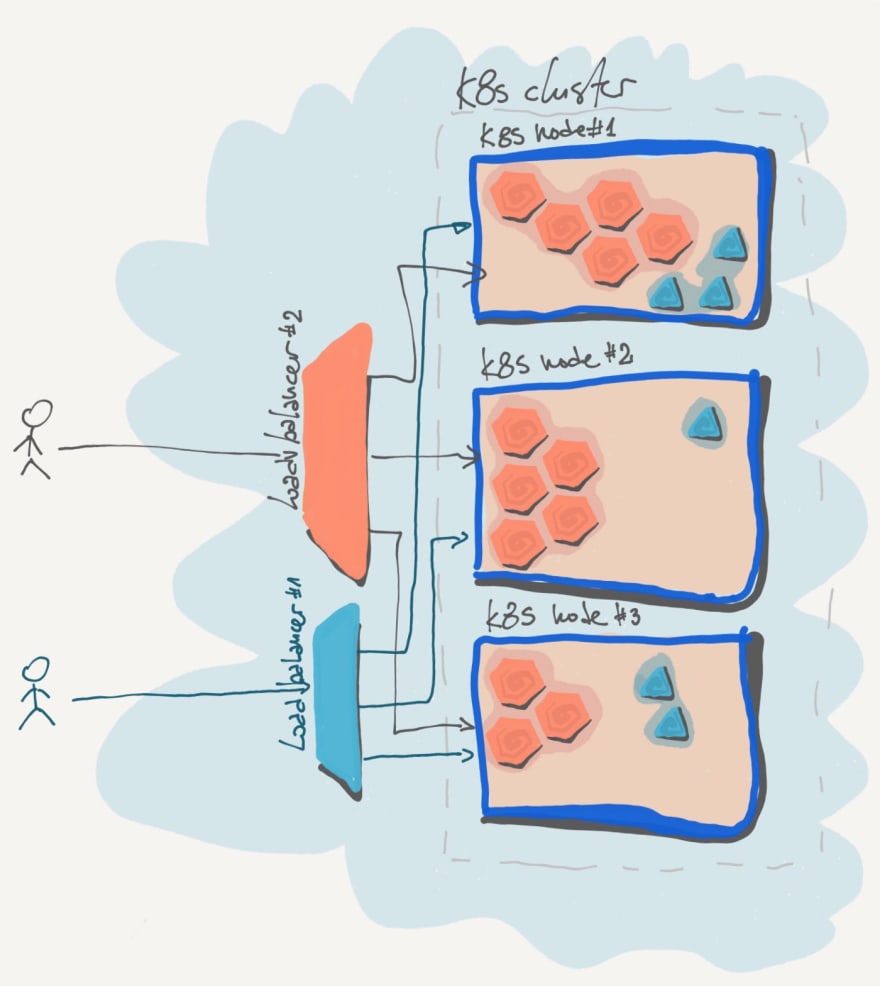 Main downside of this approach is that any service you expose needs it’s own load balancer, which can, after a while, have significant impact on complexity and price.

Above creates external load balancer and provisions all the networking setups needed for it to load balance traffic to nodes.

Note from k8s docs: With the new functionality, the external traffic will not be equally load balanced across pods, but rather equally balanced at the node level (because GCE/AWS and other external LB implementations do not have the ability for specifying the weight per node, they balance equally across all target nodes, disregarding the number of pods on each node).

If you want to add AWS ELB as external load balancer, you need to add following annotations to load balancer service metadata:

When getting into space where we are managing more than one web server with multiple different sets of pods, above mentioned services turn out to be quite complex to manage in most of the real life cases.

Let’s review example we had before — 2 APIs, redis and frontend, and imagine that APIs have more consumers then just frontend service so they need to be exposed to open internet.

Requirements are as following:

ClusterIP is necessary, we know it has to be there — it is the only one handling internal networking, so it is as simple as it can be.
External traffic however is different story, we have to set up at least one service per component plus one or multiple supplementary services (load balancers and proxies) in order to achieve requirements.

Kubernetes cluster has ingress as a solution to above complexity. Ingress is, essentially, layer 7 load balancer.

Layer 7 load balancer is name for type of load balancer that covers layers 5,6 and 7 of networking, which are session, presentation and application

For anything other then HTTP and HTTPS service will have to be published differently through special ingress setup or via a NodePort or LoadBalancer, but that is now a single place, one time configuration.

In order to setup ingress we need two components:

There are few options you can choose from, among them nginx, GCE (google cloud) and Istio. Only two are officially supported by k8s for now — nginx and GCE.

We are going to go with nginx as the ingress controller solution. For this we, of course, need new deployment.

Now, with basic deployment in place and ConfigMap to make it easier for us to control parameters of the ingress, we need to setup the service to expose ingress to open internet (or some other smaller network).

In both mentioned cases, there is a need for Layer 4 and Layer 7 load balancer:

NodePort for ingress yaml, to illustrate the above:

This NodePort service gets deployed to each node containing ingress deployment, and then load balancer distributes traffic between nodes

Above service account needs specific permissions on cluster and namespace in order for ingress to operate correctly, for particularities of permission setup on RBAC enabled cluster look at this document in nginx ingress official docs.

When we have all the permissions set up, we are ready to start working on our application ingress setup.

Let’s first take simple API example. Assuming that we have just one set of pods deployed and exposed through service named simple-api-service on port 8080, we can create simple-api-ingress.yaml.

When we kubectl create -f simple-api-ingress.yaml we setup an ingress that routes all incoming traffic to simple-api-service.

Rules are providing configuration to route incoming data based on certain conditions. For example, routing traffic to different services within the cluster based on subdomain or a path.

Let us now get to initial example:

Since everything is on the same domain, we can handle it all through one rule:

There is also a default backend that is used to serve default pages (like 404s) and it can be deployed separately. In this case we will not need it since frontend will cover 404s.

You can read more at https://kubernetes.io/docs/concepts/services-networking/ingress/ 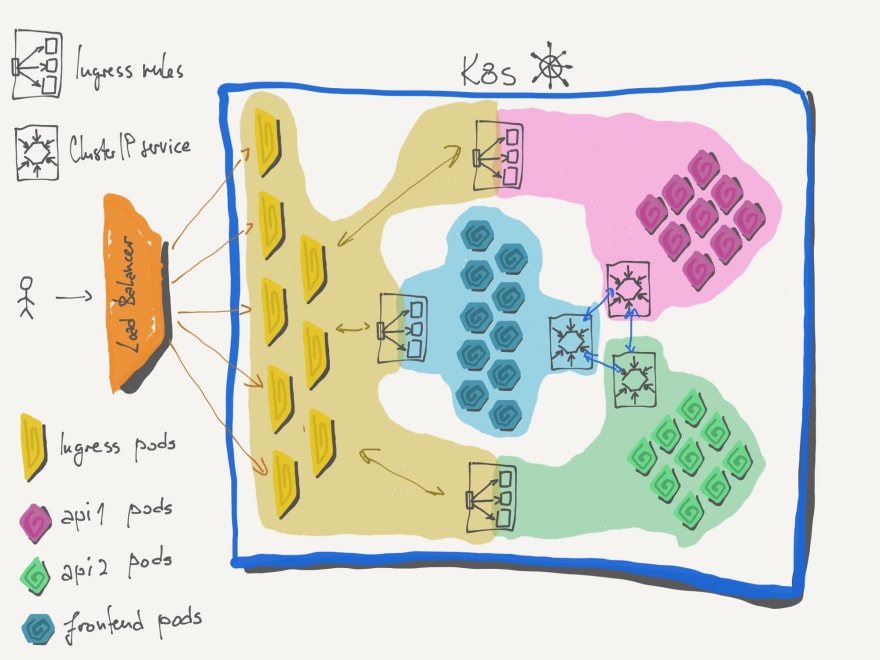 And, what if we changed the example to:

It is also possible, with the introduction of a new structure in the rule definition:

Note (out of scope): You can notice from the last illustration that there are multiple ingress pods, which implies that ingress can scale, and it can. Ingress can be scaled like any other deployment, you can also have it auto scale based on internal or external metrics (external, like number of requests handled is probably the best choice).

Note 2 (out of scope): Ingress can, in some cases, be deployed as DaemonSet, to assure scale and distribution across the nodes.

This was a first pass through the structure and usage of k8s services and networking capabilities that we need in order to structure communication inside and outside of the cluster.

I, as always, tried to provide to the point and battle tested guide to reality… What is written above should give you enough knowledge to deploy ingress and setup basic set of rules to route traffic to your app and give you context for further fine tuning of your setup.

Important piece of advice: Make sure to keep all the setups as a code in files, in your repo — infrastructure as a code is essential part of making your application reliable.

Getting Started with Kubescape on Plural

Rastko Vukašinović
I am Architect and Technical lead with experience in creating, delivering and scaling all kinds of digital solutions and infrastructure.
Local Kubernetes setup with minikube on Mac OS X
#kubernetes #macos #minikube

Once suspended, metaphorical will not be able to comment or publish posts until their suspension is removed.

Once unsuspended, metaphorical will be able to comment and publish posts again.

Once unpublished, all posts by metaphorical will become hidden and only accessible to themselves.

If metaphorical is not suspended, they can still re-publish their posts from their dashboard.

Once unpublished, this post will become invisible to the public and only accessible to Rastko Vukašinović.

Thanks for keeping DEV Community 👩‍💻👨‍💻 safe. Here is what you can do to flag metaphorical:

Unflagging metaphorical will restore default visibility to their posts.