React Hooks changed the game when they came out! They are a simpler way to encapsulate stateful behavior and side effects in a user interface while using less code and increasing readability. Some hooks are easier to understand and use than others, this is why this series of posts will focus on demystifying the hooks that are not as straightforward.

Last week, we explored useCallback and useMemo in depth. Today, let’s start by explaining what it means to imperatively modify a child and the DOM, continue by focusing on defining the useRef hook and discussing how, when, and where to use it.

Imperatively modify a child and the DOM

If you have worked with React before, you must be familiar with how a parent component uses props to interact with its children. In order to re-render a child component with different data, the parent component passes new props.

At times, we face situations where we need to imperatively modify a child component outside of the typical "passing props" dataflow or we want to manually access DOM nodes or React elements created in the render method. Here is when useRef() becomes handy! 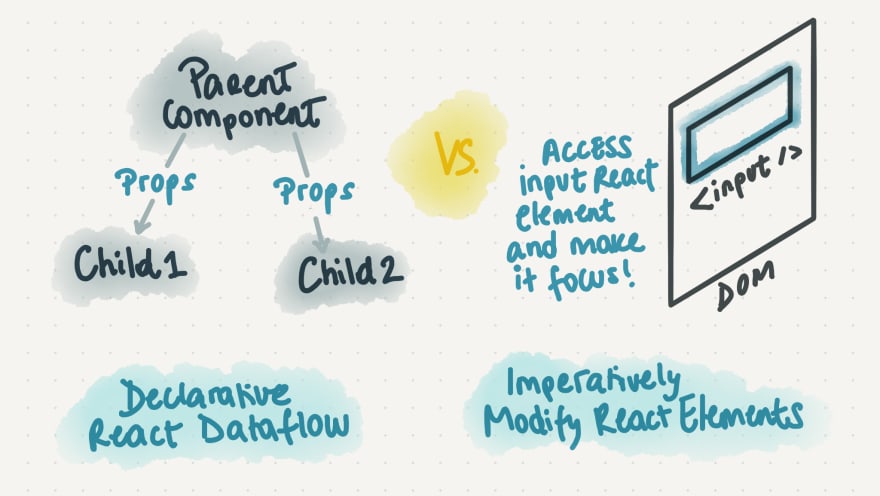 Why is useRef() Hook special?

The useRef() hook persists in between component renders (like state).

The magic of useRef is that it can be mutated without causing your component to re-update because the useRef value exists outside of the render cycle.

How to use useRef() Hook?

You initialize a useRef() hook by passing an initial value to it or initializing it empty and updating its value later:

useRef() stores an object that contains an attribute called current, which stores the passed value, in our example, it would hold the value 1.

When to use useRef() Hook?

To manage focus, text selection, or media playback. Most elements inside of your document have a ref attribute, which facilitates the use of useRef to reference elements inside of your HTML. As an example, take a look at this <input/> HTML tag, we created a useRef value and passed it to <input/> as a ref attribute. Now, we are able to imperatively modify the input element with a couple of functions that get the <input/> to focus or blur.

To access a previous value. Another helpful use for useRef is to store the previous value of your state. Take a look at the example below, we have a list of three Pokemon and you need to select your favorite. Currently Pikachu is selected… but let’s be real, Pikachu is overrated. Select any of the other options and you will see your previous selection at the bottom. This is possible as a result of the use of our useRef hook:

Then, everytime we select a different option, we keep track of the previous selection in our changeSelection() function:

Also, according to React Docs, refs are useful to trigger imperative animations and to integrate with third-party DOM libraries.

Where should you update a useRef() value? 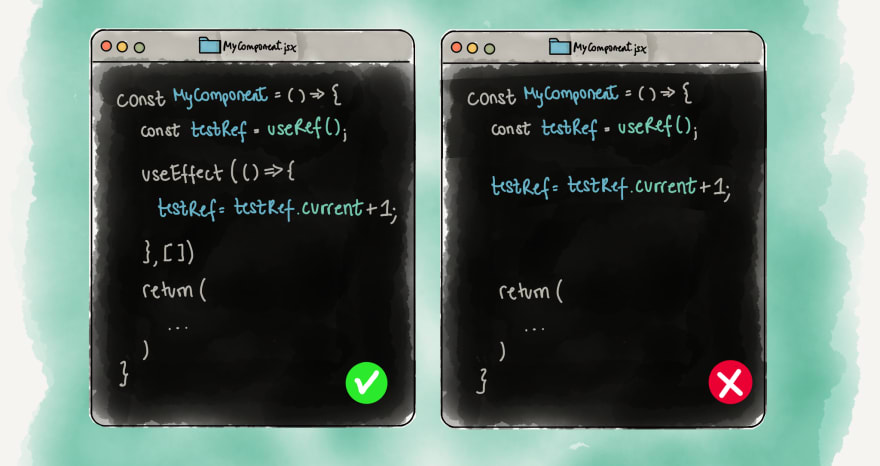 Updating a ref value is considered a side effect. This is the reason why you want to update your ref value in event handlers and effects and not during rendering (unless you are working on lazy initialization). React docs warns us that not following this rule could lead to unexpected behaviors.

Should you use refs instead of state?

Big NO. Refs aren’t reactive, which means changing its value won’t cause the HTML to update.

Take a look at the following example to make sure you understand why refs should not replace state.

We initialized a state and a ref with $1000 dollars. This component allows you to spend this value dollar-by-dollar every time you click the button Spend.

When you spend the money value stored in state, it triggers a re-render and it updates the view to show you the new value.

Now, if you spend the money value stored in ref, it will also subtract a dollar on every click, however, this change won’t trigger a re-render so you won’t see a change in your HTML.

You can check out the console to see that ref value is truly changing inside the component.

createRef() useful to access DOM nodes or React elements. BUT it creates a new instance of the ref on every render instead of keeping a value between renders when used in functional components (This does not apply if you are using a class component!).

useRef() useful to access DOM nodes or React elements AND it holds a value even when a component re-renders. Here is an example that will help you see the difference.

Take a look at the following code, we are initializing two ref values as null, using createRef and the useRef respectively.

Notice that the ref value created using useRef is only null on the first render, so it is set to 1 once and never again.

On the other hand, the ref value created using createRef is created on every single render, so it always starts as null and then it is reassigned the current state value under renderCounter.

Side note: This is a simple example to illustrate the difference in between createRef and useRef. However, modifying the value of a ref should occur in an effect or event handler, not as shown in this example.

The useRef() hook helps create mutable variables inside a functional component that won’t update on every render.

I hope this post helped you expand your understanding of useRef() and that you will start taking advantage of this feature in your future projects.