Git is a very powerful tool and It has a long list of capabilities available at your disposition. Some commands provide slightly similar results and it is worth understanding and comparing them in order to choose the one that satisfies your needs and improves your workflow. This post is going to define and compare the following commands: revert, checkout, reset, merge, and rebase.

Revert vs. checkout vs. reset

These tools allow you to undo and manipulate changes in your repository. The problem is that they are very similar, therefore it is really easy to get them confused. We will define each of them in detail and list their similarities and differences.

This is an unconventional and safe way to revoke an operation as it prevents you from losing history. Git revert inverts the changes that were added in a commit and adds a new commit with the inverted content. This command is especially helpful when you have already pushed your changes to a remote repository as it keeps your original commit intact. 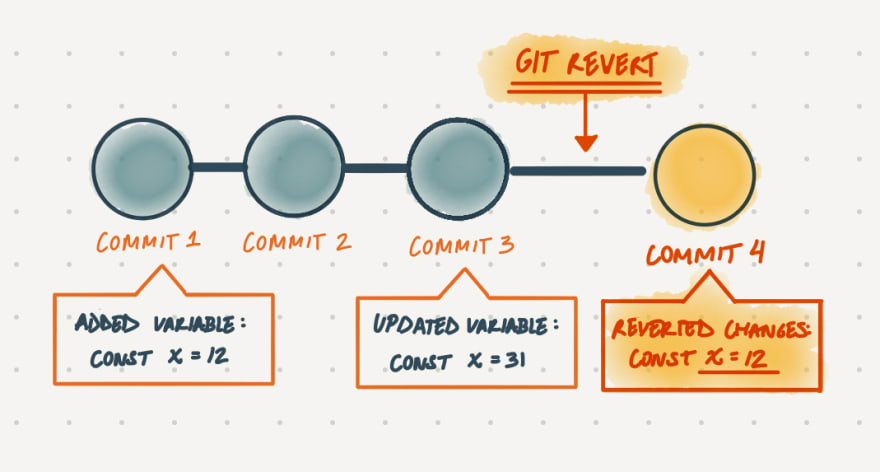 This is a versatile tool, it allows you to switch in between branches, inspect older commits, and undo local uncommitted changes by moving HEAD and updating your working directory accordingly.

To switch in between branches: git checkout [branch-name] 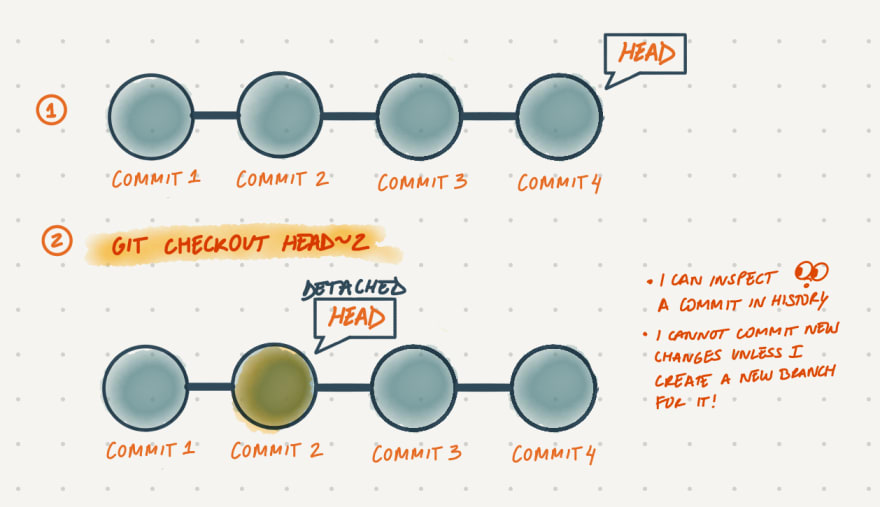 This is a powerful but complex way to undo an operation. There are three available arguments:

--mixed
This is the default mode so git reset --mixed is the same as git reset. By using any of these commands you will move HEAD to the latest commit and all the changes that were added after that commit will be available as untracked changes in your working directory.

--soft
This operation is similar to the one executed using the --mixed argument. HEAD is moved to the latest commit, however, the changes that were added after that commit are left staged.

--hard
Use the command git reset --hard only when you know what you are doing as it is very dangerous. By resetting the hard way, you will move HEAD to the latest commit and destroy the changes that were added after. This cannot be undone so use it wisely. 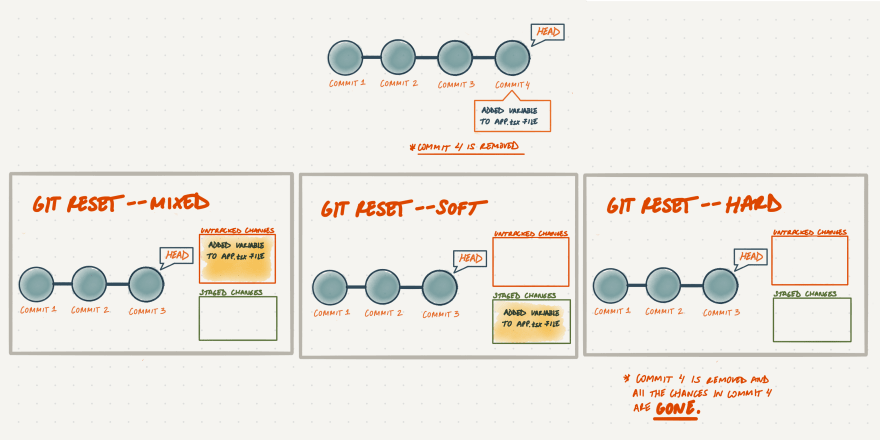 You should not use git reset when you have already pushed to a remote repository. Removing a commit that other team members have continued building upon is hard and it would disrupt your team member’s workflow.

Bonus action: Use git reset -- [file-name] to unstage a file that hasn't been committed yet.

When multiple people are working in a project you will need to combine your code at some point. Git rebase and merge have different approaches to consolidate the changes from one branch into another one.

It uses a non-destructive operation to combine two branches’ histories without changing them. In addition, it creates a new “merge commit” every time it’s used. This is a great way to consolidate changes, however your commit history could get several merge commits depending on how active your master branch is, which can get cumbersome.

To combine the latest changes from master into your branch:
git checkout [branch-name]
git merge master

This is a destructive operation as it moves an entire branch’s history on top of another one by rewriting the project history with new commits.

This command is useful if you prefer a clean and linear project history. However, it is not safe to rebase on changes that have been pushed to a remote repository master branch because you would be changing the master branch’s history while your team members continue working on a diverged version of it.

In addition, Git will not allow you to easily push a rebased branch back to a remote repository. You are going to need to force it by using git push --force, which overwrites the remote branch and could cause issues with other collaborators. In other words, stop yourself from confusing your team members and creating tedious conflicts by only using rebase to cleanup in-progress features and not the master branch.

I hope you found these comparisons helpful and easy to follow. I explore, define, and explain git concepts every Saturday!

If you are new to git, checkout my previous post Git Explained: The Basics.

Milu
Milu
Software Engineer, co-founder of @imagine_dat_dyt and mother of mutts.
• May 19 '20

That is a really great topic, especially since I've also been in that situation in the past (probably most developers have experienced it too). I will make sure to add it in a future post.
Thanks for the suggestion Javier!