When it comes to complicated things like blockchain, people try to seek an easier explanation for it. And unfortunately, there aren’t many available on the web. Well, if you’re reading this article & you know nothing about blockchain, this article is a great place to start.

So by general definition, blockchain is a decentralized network of nodes.

Well, it wasn’t that useful, right?

A hash is nothing but a unique id of each block. A hash is determined by the contents of each block so in case if the data in the block is modified, the hash will change accordingly. But block next to it will contain the hash of the unmodified block. In this way, anyone can easily find out if the block is modified or not. this makes it difficult for attackers to tamper with data of the blockchains.

Apart from hash, there are several other factors which contribute blockchain in order to make it more secure. As previously mentioned, blockchain is completely distributed among several computers which could range from few hundreds or less to millions. More the blockchain is distributed, more the secure it becomes. Those computers are known as nodes.

This is the reason why blockchain is so popular around these days. Blockchains provide facility to make transactions without the involvement of the third party in the process. It is the backbone of the Bitcoin.

Although Blockchain has several well-known applications, the most popular ones are Bitcoin & Ethereum. Bitcoin is used as a cash system for conducting transactions while Ethereum is a software which is used to create distributed applications based on Blockchain technology.

If you wanna know more about Ethereum, I've explained it very well in one of my blog posts, don't forget to check out: 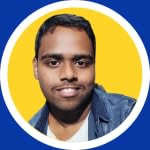 That's all folks, for now! I'll keep this blog post updated with new information constantly as I discover more amazing facts about it, until then why not follow me so that you can stay updated when I post new articles. Also if you can spare your few minutes & share it with your friends, it will be massively appreciated.

Once unpublished, this post will become invisible to the public and only accessible to Rishabh Singh ⚡.

Thanks for keeping DEV Community 👩‍💻👨‍💻 safe. Here is what you can do to flag mindninjax:

Unflagging mindninjax will restore default visibility to their posts.