Hello everyone, today we are going to build a Guess the Number Game in Python! 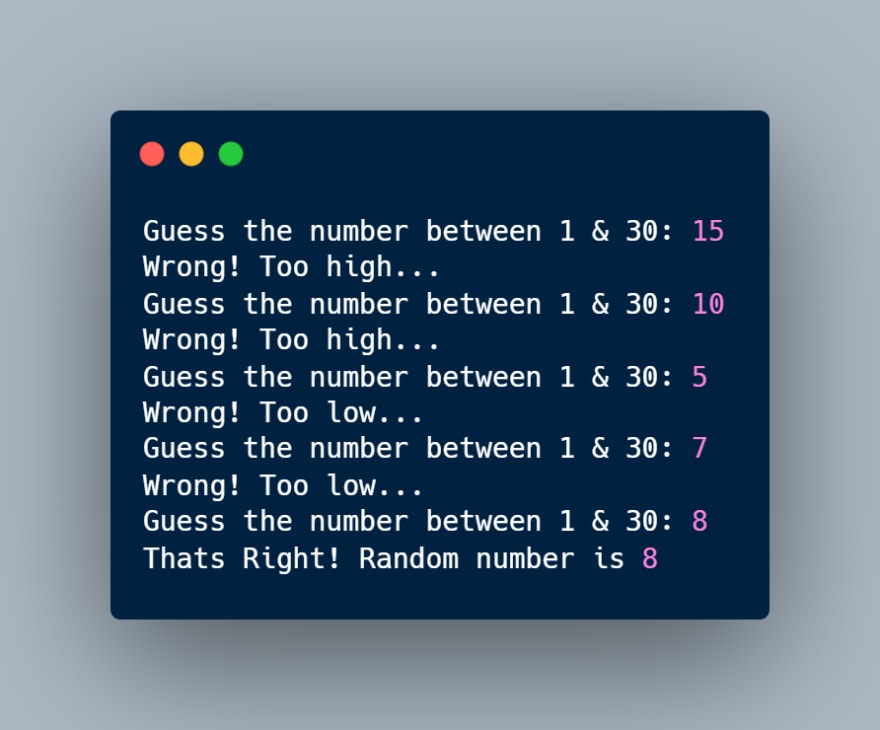 Our games will randomly generate a number between 0 and 30 and the player has to guess the number.

If the number entered by the player is less than generated number then the player will be prompted with too low message!

And if the number entered by the player is more than generated number then the player will be prompted with too high message!

This process will be repeated until the player finds the right number.

Pretty straightforward right... let's do it!

Now since we are going to generate a random number and if you've been following past tutorials in the series than you might know what we are talking about here. We are going to import a module that comes pre-installed with our Python, it's called random.

Let's import it into our project.

Now we have to initialize a max_num variable. So that we can customize the difficulty as per our choice. Higher the value of max_num, the higher the difficulty. For now, let's keep it 30.

Now it's time we generate our random number which the player has to find.

For that we will be using randint() function from the random module. We will store this random value in random_number variable.

It will generate a random number between 1 & max_num.

Then we will also initialize a guess variable to store the player's answer for comparison.

Now let's create a while loop to keep asking the player until the right number is found. We will keep this loop running until our random_number & guess matches.

Alright, so it's time we ask our player to make a guess enter a number to start the game.

We will also use int() function to covert the number from a string into an integer so that we can compare it to check the answer.

Now we will make use of if conditionals to compare the answer and provide suitable feedback to the player.

Hopefully, the logic of the while loop will be clear as we already discussed it in How does it work? section.

Here are our while loop ends.

Now one last thing we have to do is to print a final message to the screen if the player got the right answer.

Let's summarize the logic one again:

You can find the complete source code of this project here -

Thank you so much for reading! I hope you found this beginner project useful.

If you like my work please consider Buying me a Coffee so that I can bring more projects, more articles for you.

Also if you have any questions or doubts feel free to contact me on Twitter, LinkedIn & GitHub. Or you can also post a comment/discussion & I will try my best to help you :D

How to Change TextField Height and Width in Flutter?