I was scrolling on twitter one afternoon and saw that xssfox had a Bluetooth Thermal Cat Printer. I have had an idea that required a thermal printer for a while now and this looked like a really good printer for what I wanted to do, so I ordered one. 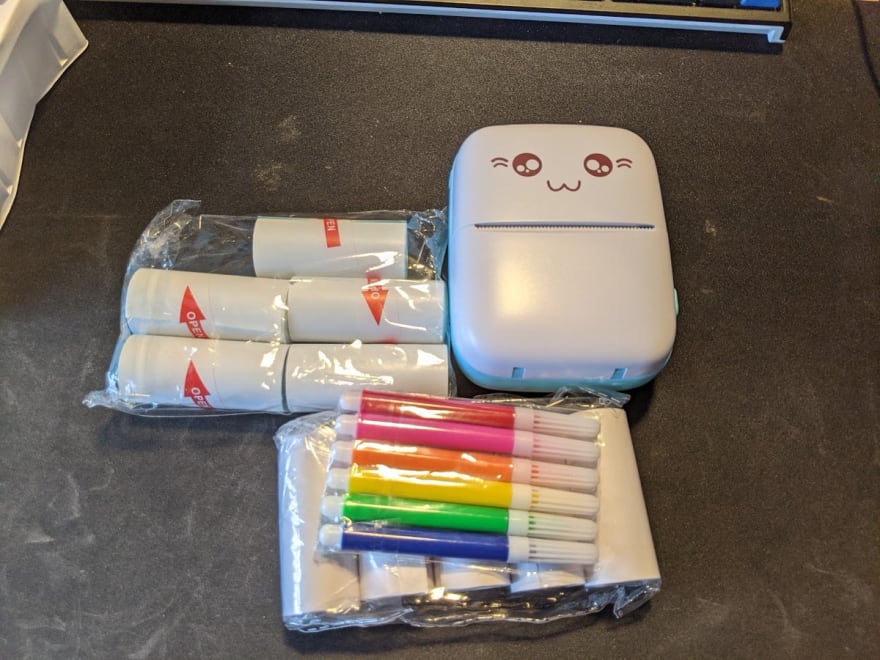 The original idea I had was to set up a thermal printer so you could message it a picture, have it print off and stick it in a guest book, like you might do with a polaroid at a wedding. But It doesn't look like I will be going to a wedding any time soon. So instead, to allow people to interact with it remotely, I decided to give it a phone number and let people send messages that would print out on my desk.

Giving The Cat Printer A Number

To be able to give the cat printer a number, first I had to get it to print. I pulled out a raspberry pi I had from the time I had my apartment lights controlled using amazon dash buttons. xssfox had some code that allowed you to send messages and images to be printed via HTTP requests. After getting that running on my pi and debugging some differences between how python handles bytes between Windows and Linux, I was able to send my first messages to print! 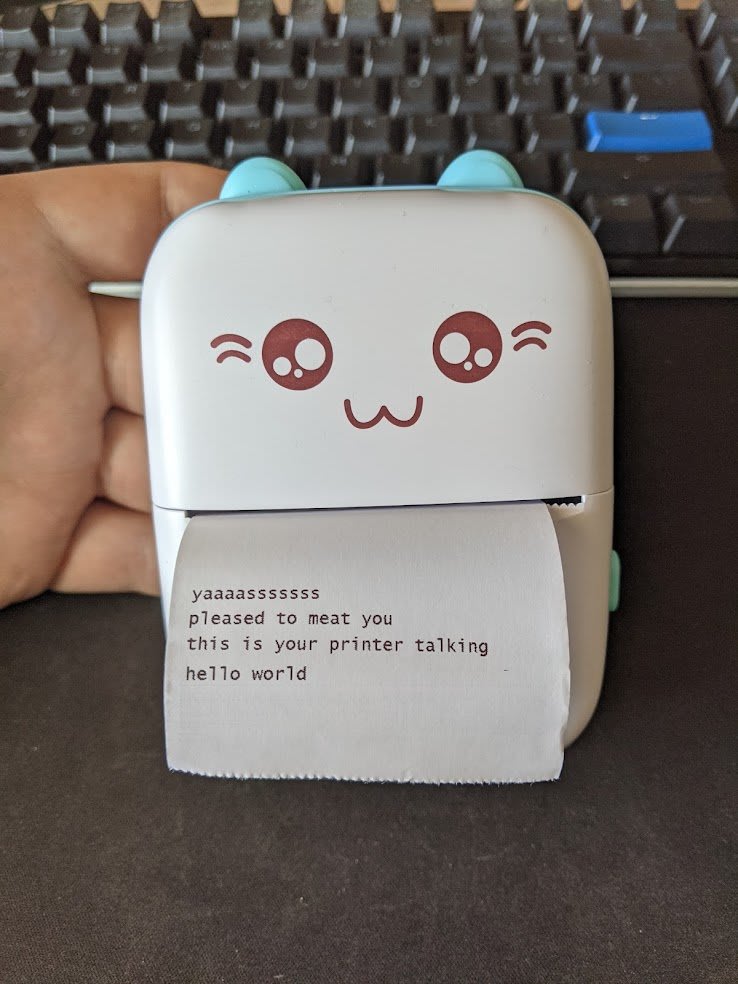 First words spoken by my printer!

Once I had it printing, I went into my Twilio console and started adding some functions to my textable light project. I created a new function that would look at the incoming message for the prefix cat: and redirect the message to the cat printer. Later I went back and made my light require the prefix light: and an error message if neither of the prefixes were present.

I then set up a second function cat_printer to format the message to be sent to the printer. It takes the incoming message, removes the cat: prefix, redacts part of the number it was received from and formats it with a timestamp for printing. Then it makes a call to the web server running on my raspberry pi (which was made available to the internet using ngrok) to print it. Once that request has been made, the response from the printer gets sent back to the number who texted it.

Getting People To Message It

Once I had it working I started telling people about it. Some of my friends had already seen my textable light, so the idea of sending a text message to something on my desk wasn't new to them. I was initially cryptic about what I had made, but once people knew what it was they started messaging it! 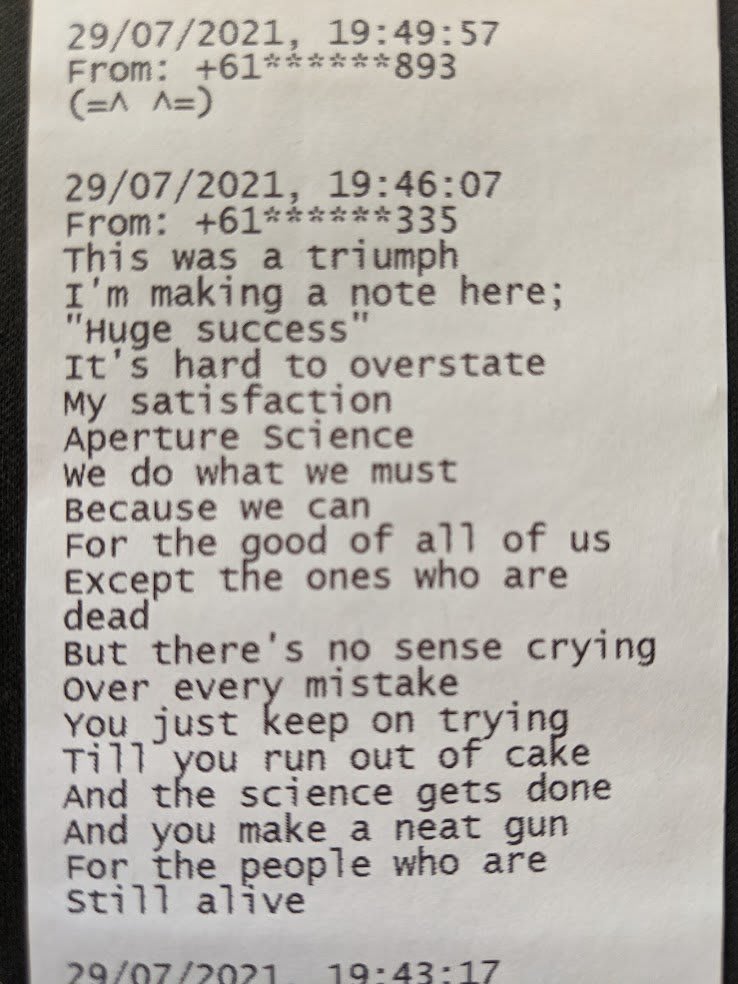 I've turned it back on this morning.

Some of my favorites from yesterday:
1. The lyrics to Still Alive
2. The lyrics to What's Going On (We ended up watching He Man last night)
3. Me and my partner trying to get each other off the couch to see what was sent

Some of my friends made me regret telling them about the cat printer: 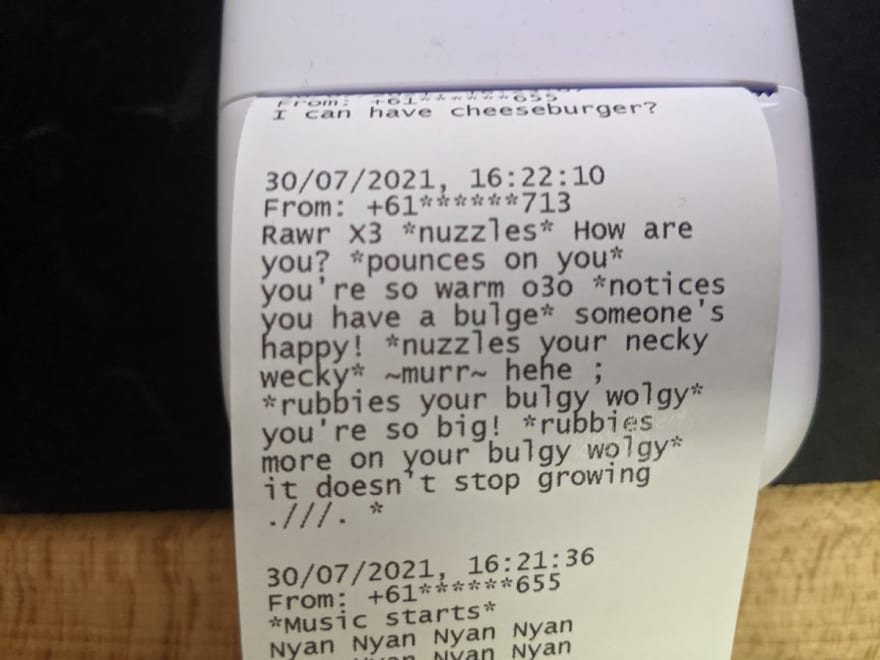 I regret telling some of my friends about this...

I streamed it briefly so people could see what they sent print in real time, including this really long message:

Then I started to see several people sending it messages internationally, so I purchased a second Twilio number so I could respond to them: 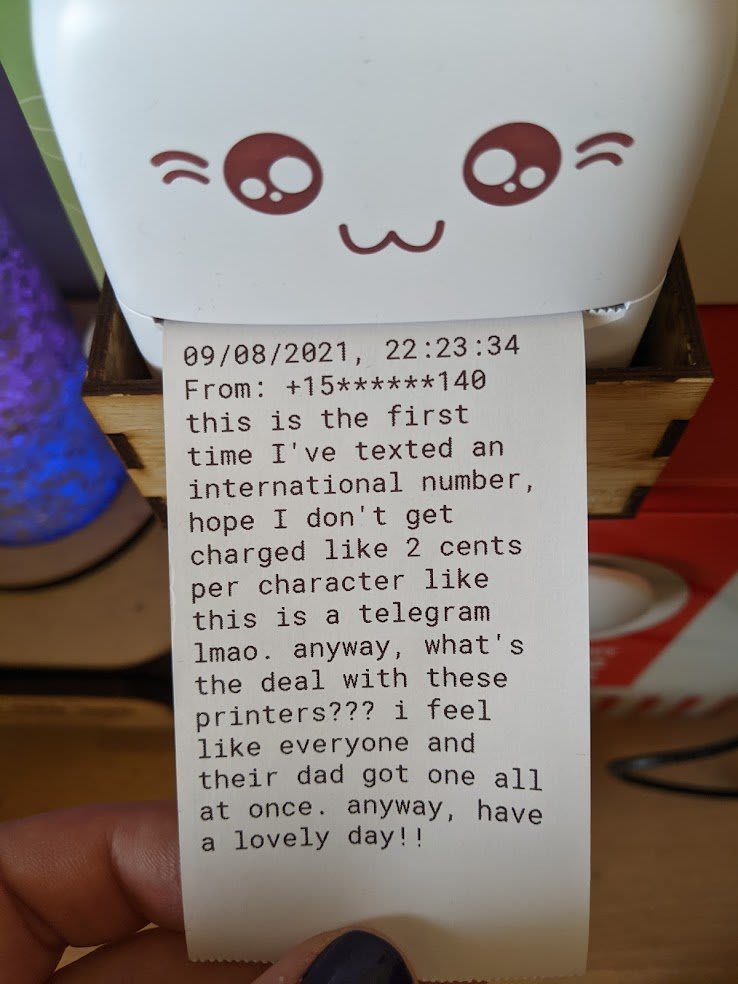 So it looks like I can't send responses to American/Canadian Numbers, but they do still print out.

Cat Printer lives and is now slightly-kind-of-sorta int'l!
Thanks for sharing, Mitch! 🙌

(quick notes:
- "cat:[message]" to print
- currently only supports ascii characters
- ascii art supported if lines are < 21 characters long & don't start with a space
) twitter.com/MitchPommers/s…
Chief Problem Solver Mitch @mitchpommers
Cat Printer has a second number now, making it easier for people who aren't in Australia to message it while I sleep. Aus: +61 480 029 995 US: +1 520 521 0228 https://t.co/Qh4qmQNVBa

Now that I have it built and it has a semi-permanent position on my desk, I need to make a better way to keep all of my projects displayed on my desk. I would really like to make them all visible on the internet permanently. I have ideas on how I could achieve this, but don't have access to what I need to make it possible or the space to do it at the moment.

And if you are considering making something similar yourself using Twilio Programmable Messaging, you can get $10 when you upgrade using this link.

A more functional approach to Event Sourcing and DDD

Magnifying Glass for Text and more!