Testing robotics systems is hard. Here are my strategies.

Robotics systems often consist of layers of application programming interfaces (APIs). While it is difficult to test the lowest-level API like a ROS hardware driver, but everything above can be tested by simulating responses from a lower-layer API using any unit testing framework such as unittest (python), jest (javascript), gtest (C++). For example, one could test perception algorithms like tabletop pose detector by simulating input images or point clouds via previously stored data (e.g., benchmark data) or algorithmically generated data. The testing approach of algorithmically generating data is interesting because it allows property-based testing, i.e., generating test cases^1. This requires designing (simple) environment generation algorithms but one could simply use existing algorithms like the ones available in PythonRobotics. The key ideas are (1) testing small and independent layers of APIs using (2) algorithmically generated inputs that one could also easily compute expected outputs.

Many robotics algorithms work with sequential data. For example, think of state estimation, control, motion planning algorithms. Out of the box, property-based testing tools do not provide creating sequential data. So the first step to testing time-dependent algorithm is updating property-based testing tools to be able to generate sequential random data. Creating a sequential sampler that does not dependent on the outputs of testing algorithms is easy (e.g., inputs for state estimation algorithms) but otherwise, one requires to create reactive environments using existing tools like combinators. At this point, basically one requires to build a tiny simulation environment. While this sounds daunting, it's actually not thanks to many existing physics simulation libraries and game programming design patterns (e.g., entity-component systems, etc.).
The second problem is verifying test cases over time. For example, one might want to check whether the outputs of a state estimation algorithm ever return null or test if a motion planning algorithm ever returns an invalid pose. I like to use linear temporal logic (LTL) to verify such temporal properties due to the LTL's simplicity. There are some subtleties of using LTLs with property-based testing tools and I'll elaborate on those in the future (if I find more time).

Like everything robotics, one must test programs with the real robots in real world at some point. One approach is integrating continuous integration testing with real robots. There was a great talk about this topic from fetch regarding this topic. A more recent talk about AWS Robomaker also touches on this topic, too.

Testing is important but being ultra-selective about which code to add to a repository is also important because maintenance is hard. 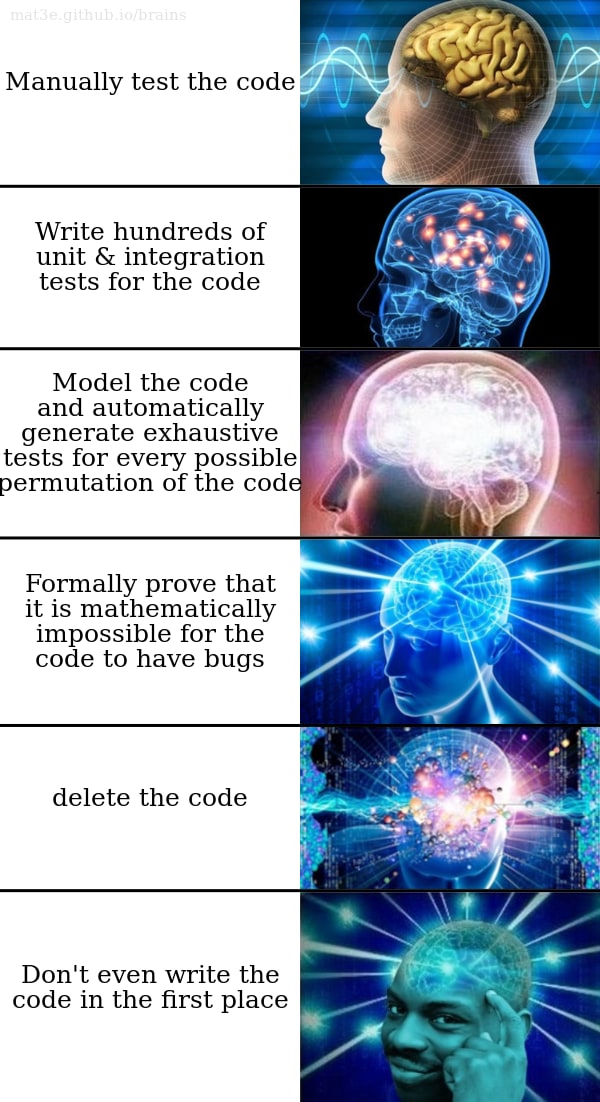 Configuring the Client for Testing with Pytest and Django REST

Get Hands On With Unit Testing - Jest Testing Tutorial

Once suspended, mjyc will not be able to comment or publish posts until their suspension is removed.

Once unsuspended, mjyc will be able to comment and publish posts again.

Once unpublished, all posts by mjyc will become hidden and only accessible to themselves.

If mjyc is not suspended, they can still re-publish their posts from their dashboard.

Once unpublished, this post will become invisible to the public and only accessible to Michael Jae-Yoon Chung.

Thanks for keeping DEV Community 👩‍💻👨‍💻 safe. Here is what you can do to flag mjyc:

Unflagging mjyc will restore default visibility to their posts.