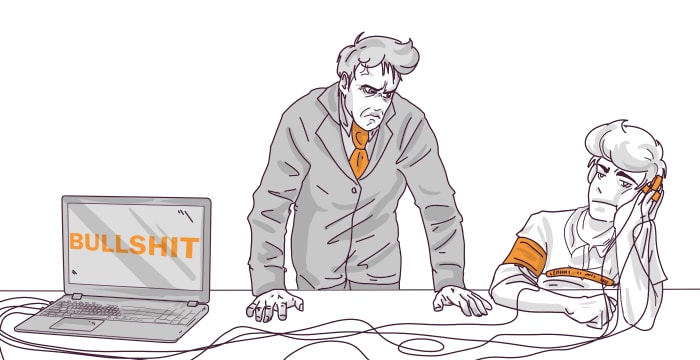 This article might seem controversial for some people, or maybe even shockingly audacious. Dear friends, I encourage you to ‘tell a pack of lies!’ and ‘pull the wool over their eyes!’ on the job interview. Come on, guys, feel free to promote yourself! Let them buy you. No! Let them haggle over you!

Well... you should look confident when you lie! No one believes you, if you just stutter, even if you’re telling the truth. Do it in a quick and fun manner. The time these people spent on you should be a pleasant memory for them. Who knows, maybe they’ll want to have the same emotions not only on the interview, but for another two years...

Here’s a little side-note for those whose conscience doesn’t let them lie: put an end to your scruples. The ads are all around us and, as we all know, any ad is either a lie or an exaggeration. The company promotes itself showing you the wanted position on the website. It promotes itself when you apply for a job. You pay for it with your time, the only thing of value that you have. You pay for it with your own life!

I hope I soothed the souls of the ones of good morals. Where was I? Right. Well, if you decided to promote yourself and sell your time, do it professionally, in other words lie!

How to pass the technical interview

Be aware of lie experts! Those are team leaders and Senior developers. Before the technical interview they hold a meeting with HR specialists, where they say something like this:

You should treat these people with caution. You’d better hold your tongue, keep to the point and, what’s more important, show that you’re competent. And if you manage to remain positive on the interview, that will be top class.

If the team leader is smart, he’s not gonna interrogate you with technical questions about all the details of any given system. There will be some of them, of course, but he’ll be more interested in your way of thinking. Interviewing a ‘soldier’, such people think about what kind of ‘officer’ this soldier might become.

The ones who love asking technical questions are pretty easy to get away with too. After having completed several interviews, you’d notice that the questions were mostly the same. And you can study them beforehand. Surprisingly enough, these questions are usually not connected with the tasks you’re going to do at work. Alas, this is how it works.

Nothing disorients your opponent and makes him think that you’re pretty smart more than your surface knowledge. Its importance on an interview cannot be underestimated!

If you are asked about some particular technology, it’s not a big deal if you’ve never used it before. But if you know what it is and why it is used, half the job is done. And you can claim that it’s familiar to you, if you manage to run it on your computer and work with it a little bit. Does being familiar means something else?

That’s really cool if you know some common IT topics, be it the network theory or Agile, design patterns or popular today messenger Slack. What you’re talking about doesn’t matter, what matters is that you ‘keep up with the IT world’. This is one of the key aspects for recruiting you.

So look through Wikipedia more often and you’ll have all the chances to make an impression of an expert and even become one.

I mentioned above that a developer can be compared to a soldier or an officer. This part of the article explains why. The idea is pretty simple: if you apply for a Junior position, you shouldn’t restrain yourself from knowing stuff asked for Middle or Senior ones. It would be really cool if you knew a little bit of everything. Learn even the most difficult topics little by little.

Each of us has its own specific skills. That’s very likely that some complicated topic might be easy for you, whereas some simple one might be pretty hard to grasp. That’s why I think that 100% of Senior developers don’t have all the knowledge needed from Junior developers. Everybody has his or her own blind spots. Sometimes you’re not lucky enough, and the interview is mostly about those unfamiliar fields. But sometimes it’s the other way around, you’ve been able to make an impression of an expert in some field and now it’s your chance to ‘raise your price’.

There’s also one more reason why you should try to study complicated topics in the desired field right away. Imagine a situation when there’s a technical specialist who conducts an interview putting off his ‘super-difficult’ mundane tasks. And there are you, who needs some simple questions. Of course, he will underestimate you, as he probably has a lot of other, more important tasks, he’s bored and he feels as if he wastes his valuable time. And then your talk shifts to some more complicated subject. He becomes more excited. And if you are able to shift to the subject he’s working on right now and show even the slightest expertise in it, that will be a complete success!

So how do you find the topics that are interesting for the interviewers? It’s not an easy question and generally I am not able to do that before an interview. But it’s worth it to give it a shot.

You should definitely look through the position requirements and read all the technologies listed there. That’s even better if you have some experience in some of them. It might be helpful to keep track of the positions on the websites, even if you’re not looking for a job right now.

Every morning I receive a selection of vacant Python positions from some well-known website. I look through every one of them. I examine the technologies they use and look if there’s something new that I don’t know yet. If there is, I make sure to open Wikipedia and even study it more thoroughly.

Seize all the opportunities! Be a smart liar! Send you CV to all the positions and visit all the interviews that you’re invited to. What you lose on the swings you gain on the roundabouts... The company might seem really high-end at first, but will turn out to be a boring one. But there also might be a pretty hearty and lively team behind an absolutely ridiculous position. Well, nothing prepares you more for interviews than being interviewed many times.

So let’s go and lie to all of them!

This is an mkdev article by Alexey Kurylev.

10 of the coolest developer T-shirts from devshirt.club