My team and I have been working on this piece covering how to implement client-side encryption as part of a data privacy architecture. It was first published on Angular In Depth. Take a look here! Enjoy!

Data is exponentially increasing — 90% of the world’s data was created in just the last two years. The regulatory climate is shifting — 70% of all countries have now adopted comprehensive data privacy laws. As a result, software developers are rethinking their data privacy architecture (or lack thereof).

In this article, you will learn how to:

Some of the Angular classes we will use include HttpInterceptor and ClassDecorator.

Encryption as a Cross-Cutting Concern

A cross-cutting concern is code that is repeated in many parts of a program, but which is not related to a program’s primary function. Classic examples are logging and encryption.

Isolating cross-cutting concerns is an example of don’t repeat yourself (DRY). It speeds development, keeps the implementation of non-functional requirements (NFRs) consistent across large teams, and simplifies audit and test.

In Angular, we use an HttpInterceptor to implement client-side encryption as a cross-cutting concern.

Insider’s guide into interceptors and HttpClient mechanics in Angular.

HttpInterceptor is a middleware concept introduced in Angular 4.3 as part of @angular/common/http. The framework class HttpClient can be configured with one or more HttpInterceptors at module initialization. HttpClient chains HttpInterceptors together based on the order of registration. Each interceptor has an opportunity to modify the HttpRequest on the way out and the HttpResponse on the way back in. The chain ends by invoking the framework class HttpService which sends the HttpRequest and listens for an HttpResponse. 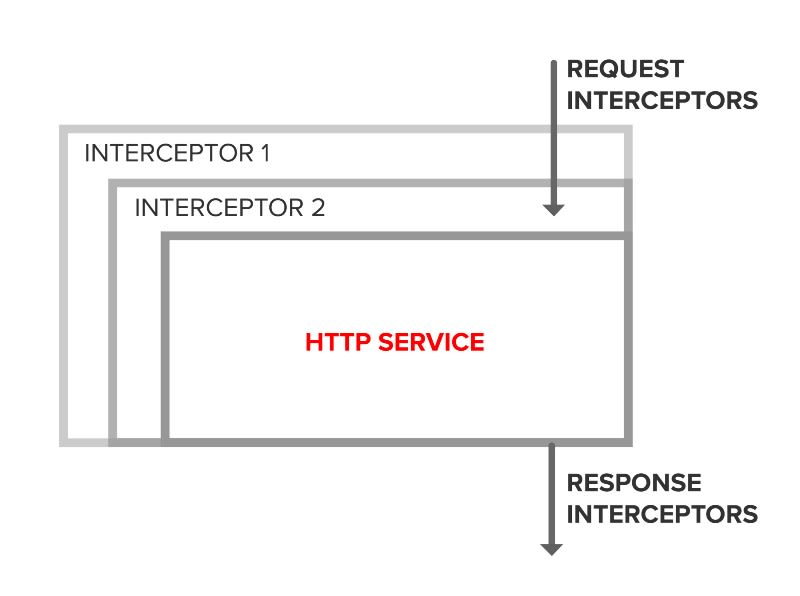 Let’s illustrate the concept with an HttpInterceptor that simply logs a message to the console and chains to the next handler.

Run the angular-ironcore-logging-interceptor - StackBlitz and click the Make Request button.

The Interceptor logs the message api/quotes/1 has been intercepted! to the console.

In this section, we will add an HttpInterceptor that encrypts HttpRequest data and decrypts HttpResponse data.

Implementing the low-level details of encryption and key management is non-trivial. For this reason, we use an audited, vetted third-party encryption library.

Getting security right is hard for the best teams in the world. It’s impossible for most teams.

Register IronHttpInterceptor as a provider in your AppModule.

Run the angular-ironcore-http-interceptor-nothing-encrypted - StackBlitz and click the Make Request button. IronHttpInterceptor passes through the request and response because the quote resource does not have an associated privacy policy.

The IronHttpInterceptor will log some messages that show that the request and response should not be encrypted. 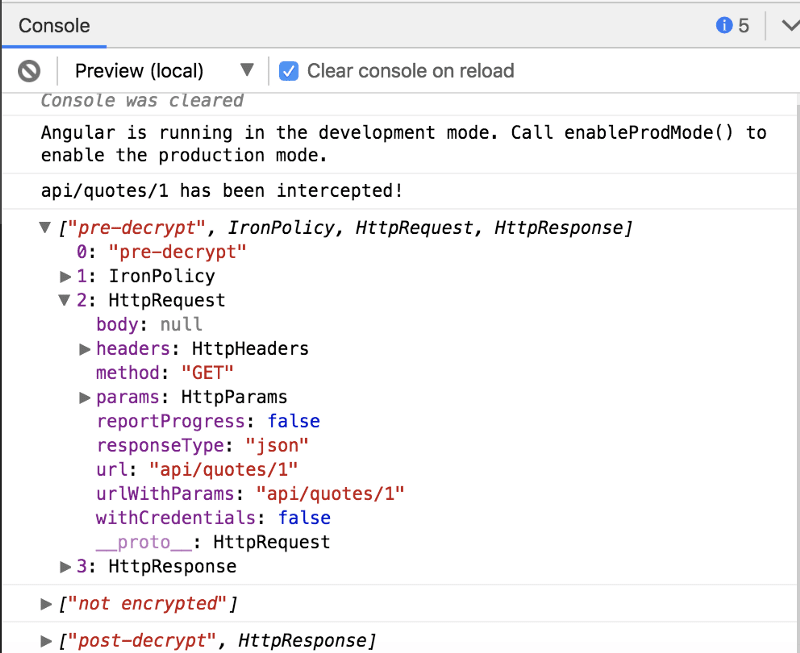 For our example, we’re going to define an Order class. In our fictitious app, an Order is a top-secret message that we must keep secure and private. A REST endpoint persists orders in a (mocked) backend.

We are going to use the IronEncrypt class decorator to specify our data privacy policy. Class decorators provide a convenient way to attach metadata to a class. If you’ve used @Component or @Injectable, you’re familiar with the concept of class decorators.

Implement the Order and apply the IronEncrypt class decorator with the data classification top-secret.

The interceptor will encrypt the Order on HTTP POST and PUT, and decrypt it on HTTP GET. Requests and responses for other data types will pass through the interceptor without being modified. 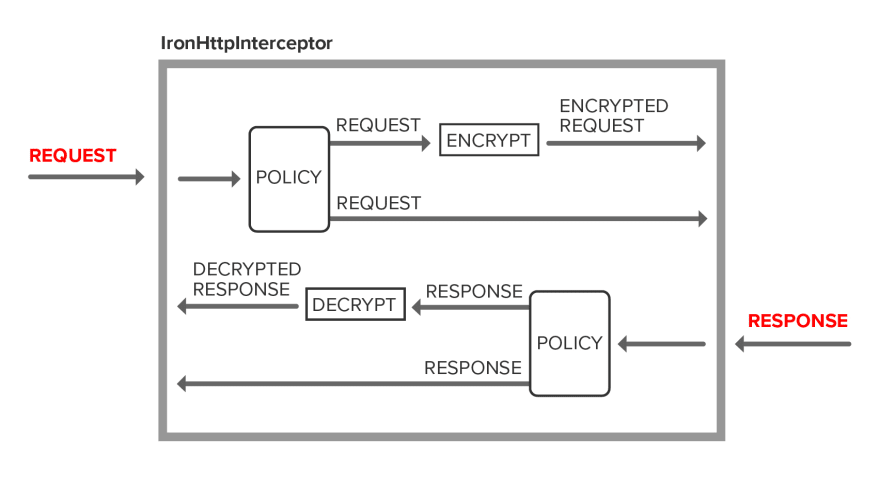 Start the angular-ironcore-round-trip - StackBlitz and submit an order to encrypt.

The console logs unencrypted and encrypted JSON. The encrypted JSON is generated on the client, using a private key that does not leave the local device. 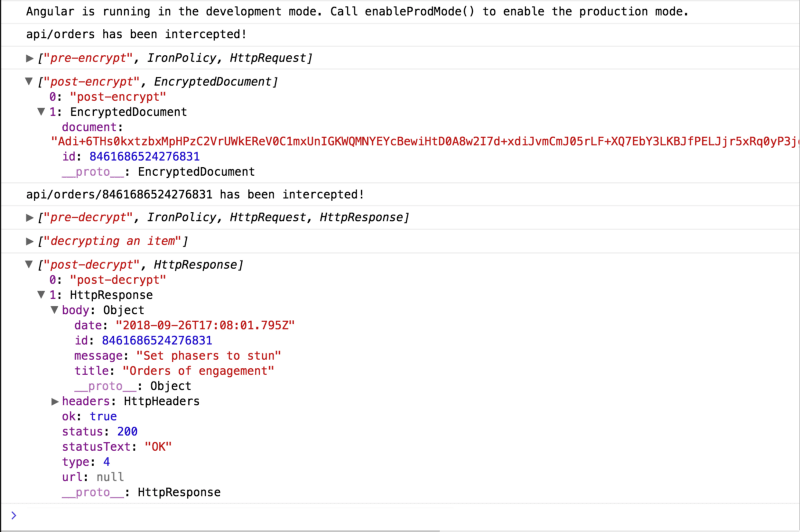 All human beings have three lives: public, private and secret.

Most applications have a mix of data with different levels of sensitivity. For example, data classifications might include:

In a data privacy architecture, we want to make it easy to classify data declaratively. Declarative programming is specifying business logic without having to describe control flow. An example of a declarative approach is CSS; we define a CSS selector to declare a paragraph as bold, but we don’t have to define how bold is implemented. Classifying data declaratively simplifies the consistent application of data privacy rules across large teams of developers with varying skill sets.

We want to be able to classify data when it is created, and decide later who should be able to access specific data classifications.

Here are some examples of how the IronEncrypt class decorator can be used to specify data classifications.

In the examples above, the classification is known at design time. It’s often the case where classification is more dynamic. For example, we may want to classify data as personal-health-information for the active user. IronEncrypt has a number of options to support use cases like this. One simple approach is to define during initialization well-known identifiers (e.g, personal-health-information) to serve as lookup keys into a bindings table that holds the actual surrogate keys.

In this article, we’re showing how data classification and policy architecture is applied to HTTP with a backend REST endpoint. The same approach is also used to define how data is encrypted in browser local storage or S3 buckets.

All problems in computer science can be solved by another level of indirection.

Access control defines which users or system processes are granted access to data, as well as what operations are allowed to be performed on that data.

In a data privacy architecture, we want access control to be embedded in the data itself. The important point here is that the access control is cryptographically enforced. Encryption algorithms are used to mathematically prove that only users with a valid cryptographic key are able to access data subject to their roles and permissions. The cryptographic implementation is both heavily audited and subject to the scrutiny of open source to provide a higher quality standard.

To make this system practical and scalable, it’s important to separate the decision of how to classify the data (e.g., personal health information) from the decision of who can access that data. This is a concept called orthogonal access control.

Let’s look at some infographics to explain the concept. Here we are encrypting data at its point of origin to a data classification (e.g., personal-health-information). 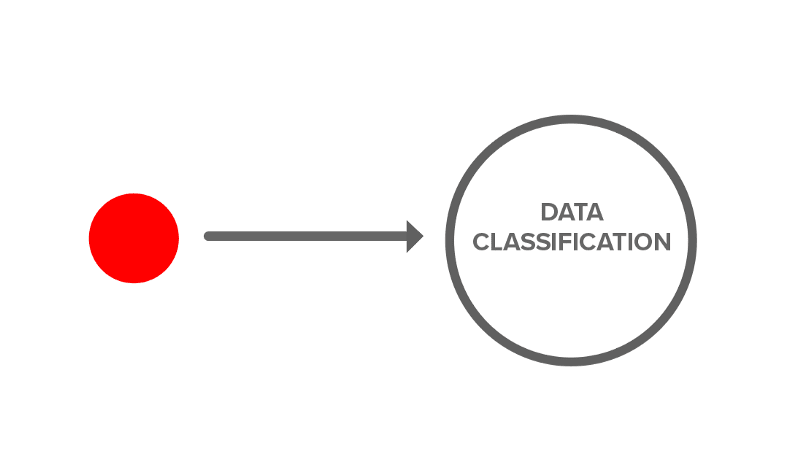 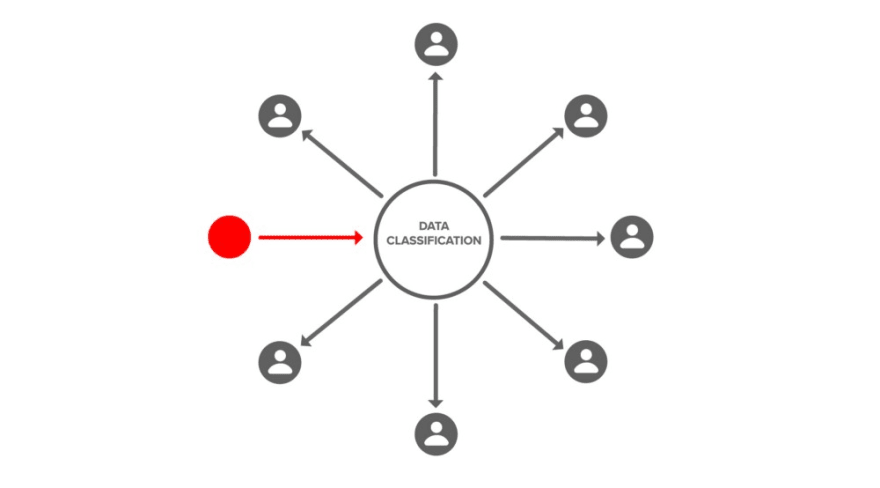 There is also a cryptographic action to revoke user access by removing users from a data classification or group. 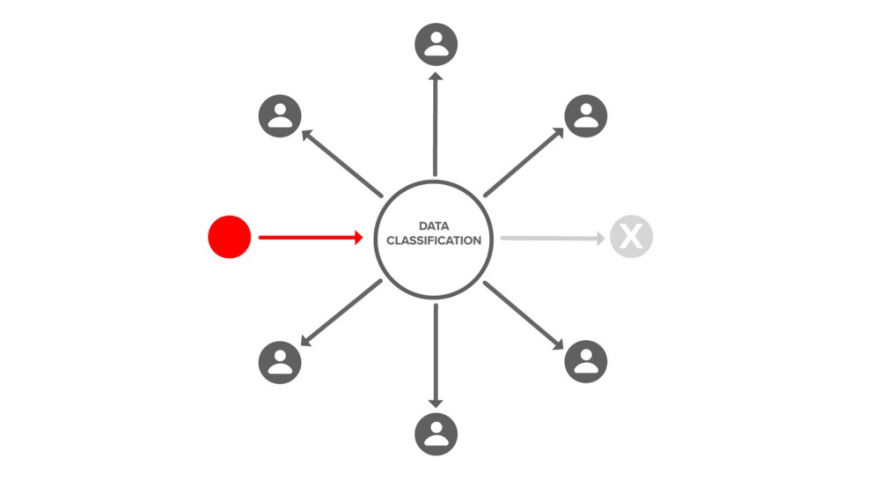 There is also a cryptographic action to grant access to groups and delegate administration. 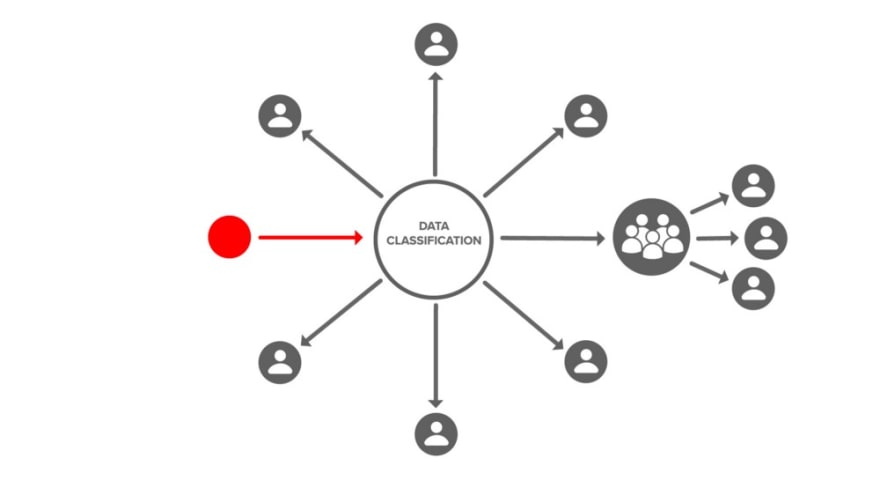 While it isn’t necessary to understand how cryptographically-backed, orthogonal access control works in order to effectively use it, many developers like to know. Let’s explore that below.

In the descriptions below, we use the terms plaintext and ciphertext.

Plaintext is the original data that someone wants to secure so it cannot be accessed by anyone but the intended recipients.

Ciphertext is the scrambled result produced when the encryption process is applied to the plaintext.

A good encryption algorithm produces ciphertexts that look like random data and requires a lot of work to recover the plaintext by anyone that is not authorized. This process of recovering the original plaintext from a ciphertext is called decryption.

Most encryption algorithms use a key as part of the encryption/decryption process. Possession of the key that is correct for a particular ciphertext serves as a person’s authorization to access the plaintext that produced that ciphertext.

If data is encrypted to multiple users, it must be separately encrypted with each user’s public key. To revoke user access, we must possess and change the underlying data (and all its copies). 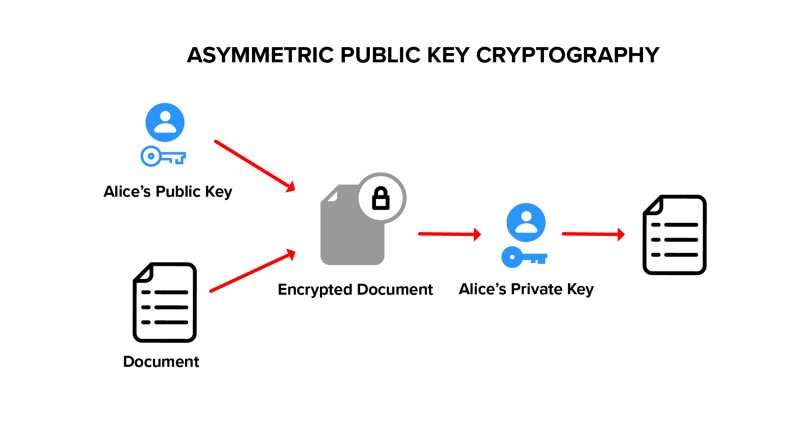 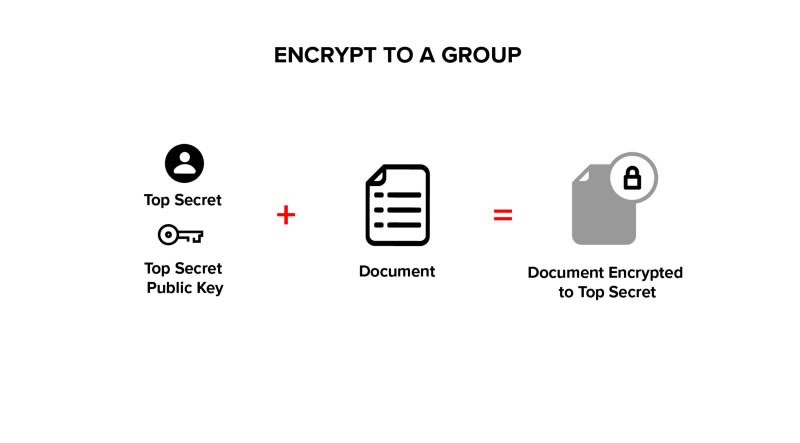 The transformed member ciphertext is decrypted with the member private key on the member’s local client device. The private decryption key does not leave the member’s device. 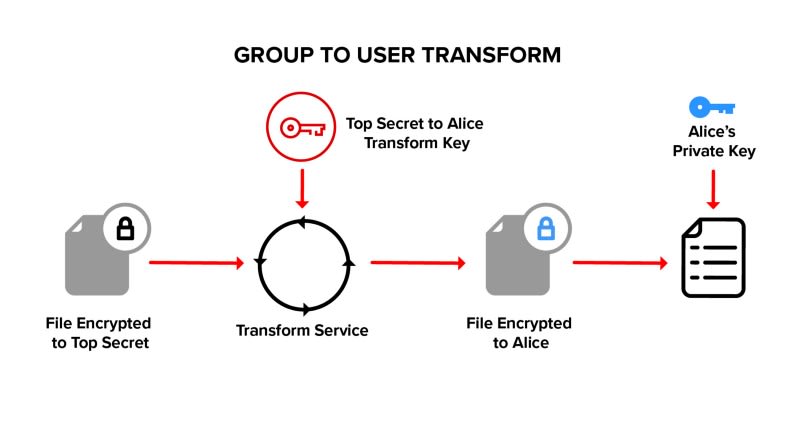 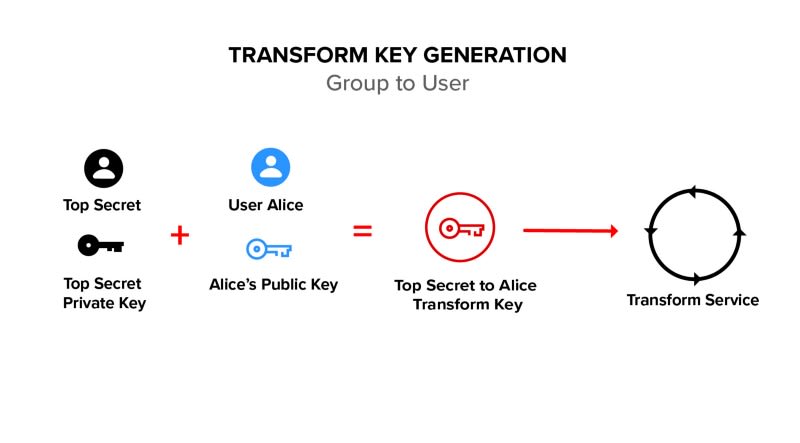 Group administrators cannot decrypt data encrypted to the group. This property of being able to administer groups but not decrypt the underlying data is implemented cryptographically with a key augmentation algorithm. See the ACM paper Cryptographically Enforced Orthogonal Access Control for details.

The transformation process does not require (or allow) the transform service to decrypt the ciphertext while transforming it. This allows transforms to be done by a semi-trusted service. The service never gains access to the plaintext and cannot get any information about the private key of either the group or the member.

An important property of transform encryption is that data can be encrypted to a group without knowing who is in the group or who will be added or removed. For example, we can encrypt our medical records and decide later what hospital can access them. When we check out of the hospital, we can remove access. The ability to decide later and change our mind makes transform encryption ideal for protecting data in the cloud, where data is often shared with a large or dynamic set of users.

There are only two hard things in Computer Science: cache invalidation and naming things.

In the academic literature, transform encryption is called Proxy Re-Encryption (PRE). We do not use that term because in other contexts re-encryption implies an encrypt — decrypt — encrypt cycle, which we are not doing here. We use the term transform encryption to emphasize that the service transforms group ciphertext to member ciphertext, without the need for an intermediate decryption step.

In the sections above, we simplified our description by assuming that a single type of encryption was applied to the entire data stream. In practice, public key cryptography almost always uses a symmetric inner key, called a document encryption key (DEK), to encrypt the data.

In the encryption process, a random AES key is generated as the document encryption key (DEK). The data is encrypted with this key.

The DEK is then encrypted with a public key. The encrypted DEK may be stored with the data or elsewhere.

After we have transformed the encrypted DEK, the user’s private key is used to recover the DEK symmetric key.

The unencrypted DEK is then used to decrypt the underlying data.

The encrypted DEK is small, minimizing network traffic and making transforms a lightweight operation. And since the DEK is a symmetric key, decryption is faster.

We skipped over some important topics related to data privacy. We’ll cover those in future articles. If you’re interested in following along, watch this blog and/or sign up for our newsletter. Some of the topics we’re planning:

A complete sample application is available at https://github.com/IronCoreLabs/getting-started-angular.

How to Create and Configure Your Kubernetes Service Account

React vs Angular Comparison: Which is Better and Why?

A Simple Way To Read JSON Data In Your Angular App

Once suspended, mkerndt will not be able to comment or publish posts until their suspension is removed.

Once unsuspended, mkerndt will be able to comment and publish posts again.

Once unpublished, all posts by mkerndt will become hidden and only accessible to themselves.

If mkerndt is not suspended, they can still re-publish their posts from their dashboard.

Once unpublished, this post will become invisible to the public and only accessible to Madison Kerndt.

Thanks for keeping DEV Community 👩‍💻👨‍💻 safe. Here is what you can do to flag mkerndt:

Unflagging mkerndt will restore default visibility to their posts.