What is the Bridge design pattern? 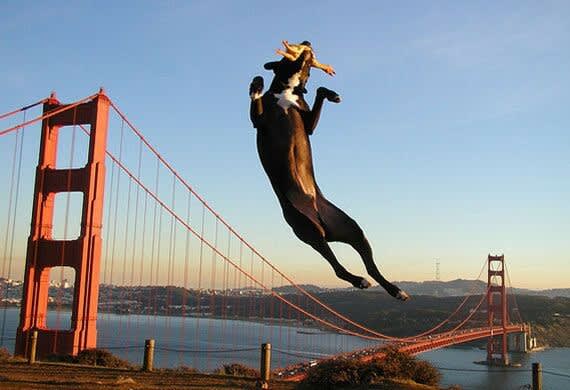 Bridge, also known as Handle/Body, belongs to the category of structural design patterns. The intention of this design pattern is described in the GoF book:

Decouple an abstraction from its implementation so that the two can vary independently.

If the Abstraction and Implementation terms sound too academic to you, imagine this: abstraction (or interface) is just a high-level layer for some particular entity. This layer is just an interface that is not supposed to do any real work on its own — it should delegate the work to the implementation layer. A good example of this is a GUI (graphical user interface) and OS (operating system). GUI is just a top-level layer for the user to communicate with the operating system, but it does not do any real work by itself — it just passes user commands (events) to the platform. And what is important about this, both GUI and OS could be extended separately from each other, e.g. a desktop application could have different views/panels/dashboards and at the same time support several APIs (could be run on Windows, Linux and macOS) — these two parts could vary independently. Sounds like a Bridge design pattern, right?

The general structure of the Bridge design pattern looks like this: 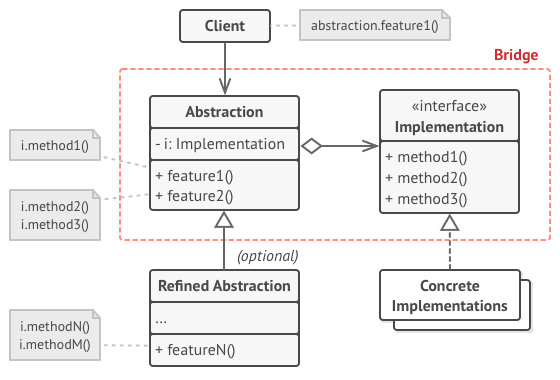 The Bridge design pattern should be used when you want to divide a monolithic class with several functionality variants. In this case, the pattern allows splitting the class into several class hierarchies which could be changed independently — it simplifies code maintenance, smaller classes minimizes the risk of breaking existing code. A good example of this approach is when you want to use several different approaches in the persistence layer e.g. both database and file system persistence.

Finally, the bridge design pattern is a lifesaver when you need to be able to switch implementations at run-time. The pattern lets you replace the implementation object inside the abstraction — you can inject it via the constructor or just assign it as a new value to a field/property.

We will implement the persistence layer for our example using the Bridge design pattern for the implementation part.

Let’s say your application uses the external SQL database (not the local SQLite option in your device, but the cloud one). Everything is fine until the wild connection problems appear. In this case, there are two options: you are not allowing users to use the application and provide a funny connection lost screen or you can store the data in some kind of local storage and synchronise the data later when the connection is up again. Obviously, the second approach is more user friendly, but how to implement it?

In the persistence layer, there are multiple repositories for each entity type. The repositories share a common interface — that is our abstraction. If you want to change the storage type (to use the local or cloud one) at run-time, these repositories could not reference the specific implementation of the storage, they should use some kind of abstraction shared between different types of storages. Well, we can build another abstraction (interface) on top of that which is then implemented by the specific storages. Now we connect our repositories’ abstraction with the storages’ interface — voilà, that is how the Bridge design pattern is introduced into our application! Let’s check the class diagram first and then investigate some implementation details.

The class diagram below shows the implementation of the Bridge design pattern: 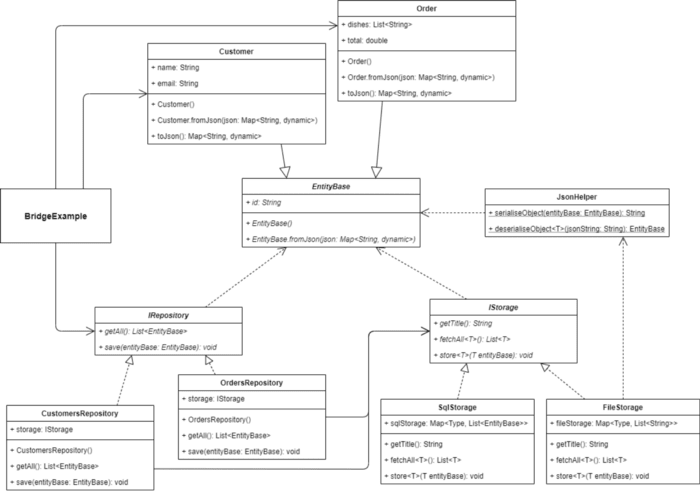 The EntityBase is an abstract class that is used as a base class for all the entity classes. The class contains an id property and a named constructor EntityBase.fromJson to map the JSON object to the class field.

Customer and Order are concrete entities that extend the abstract class EntityBase. Customer class contains name and email properties, Customer.fromJson named constructor to map the JSON object to class fields and a toJson() method to map class fields to the corresponding JSON map object. Order class contain dishes (a list of dishes of that order) and total fields, a named constructor Order.fromJson and a toJson() method respectively.

IRepository is an abstract class that is used as an interface for the repositories:

IStorage is an abstract class that is used as an interface for the storages:

FileStorage and SqlStorage are concrete storage classes that extend the abstract class IStorage and implement its abstract methods. Additionally, FileStorage class uses the JsonHelper class and its static methods to serialise/deserialise JSON objects.

BridgeExample initialises and contains both — customer and order — repositories which are used to retrieve the corresponding data. Additionally, the storage type of these repositories could be changed between the FileStorage and SqlStorage separately and at the run-time.

An abstract class that stores the id field and is extended by all of the entity classes.

A simple class to store information about the customer: its name and email. Also, the constructor generates random values when initialising the Customer object. 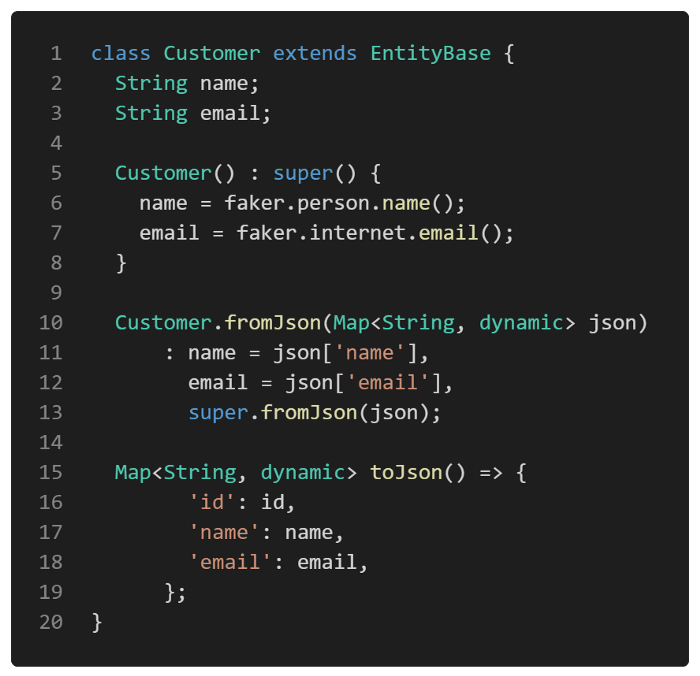 A simple class to store information about the order: a list of dishes it contains and the total price of the order. Also, the constructor generates random values when initialising the Order object. 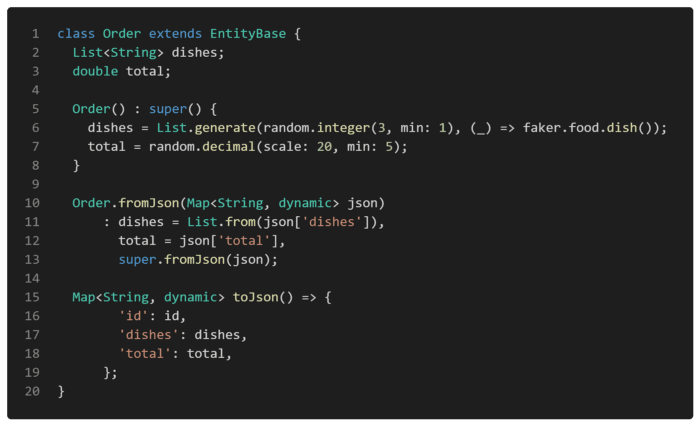 A helper classes used by the FileStorage to serialise objects of type EntityBase to JSON map objects and deserialise them from the JSON string. 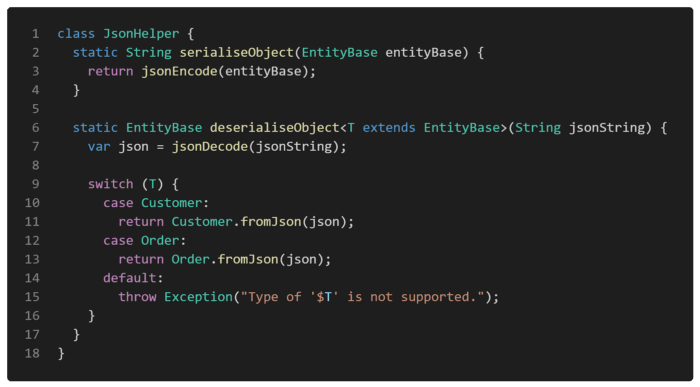 An interface that defines methods to be implemented by the derived repository classes. Dart language does not support the interface as a class type, so we define an interface by creating an abstract class and providing a method header (name, return type, parameters) without the default implementation. 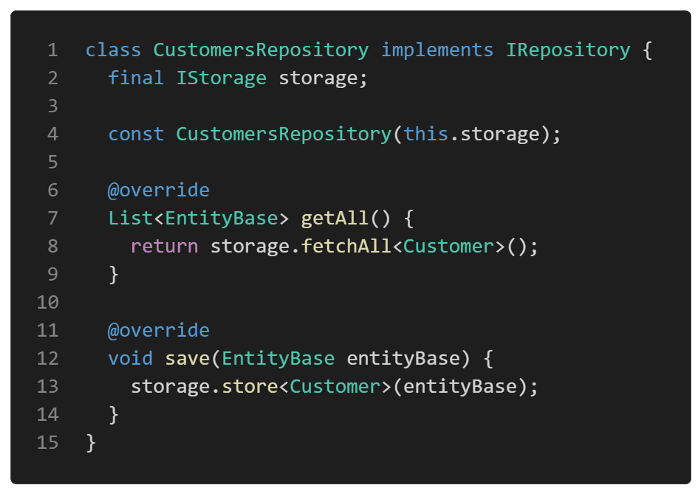 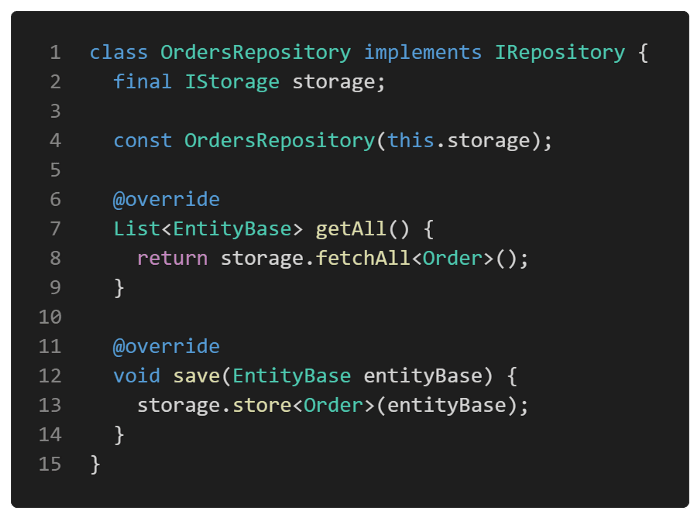 An interface that defines methods to be implemented by the derived storage classes. 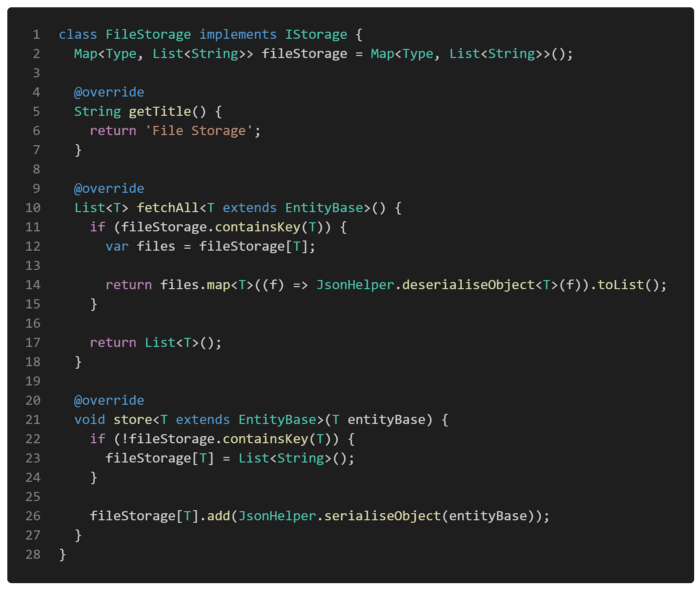 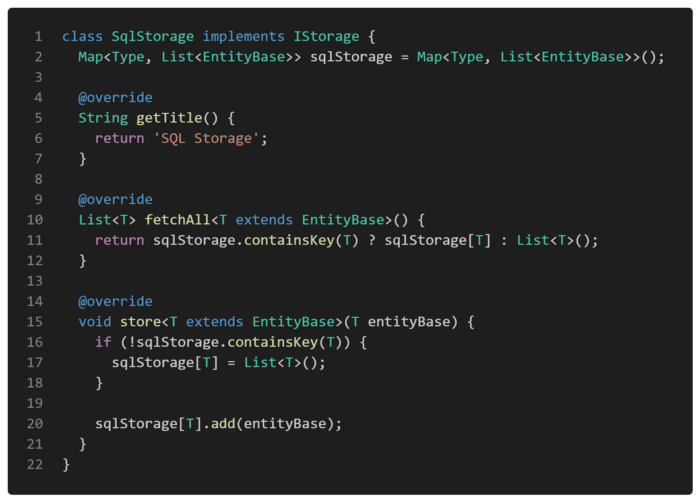 First of all, a markdown file is prepared and provided as a pattern’s description:

BridgeExample contains a list of storages — instances of SqlStorage and FileStorage classes. Also, it initialises Customer and Order repositories. In the repositories the concrete type of storage could be interchanged by triggering the onSelectedCustomerStorageIndexChanged() for the CustomersRepository and onSelectedOrderStorageIndexChanged() for the OrdersRepository respectively.

As you can see in the example, the storage type could be changed for each repository separately and at run-time — it would not be possible by using the simple class inheritance approach.

All of the code changes for the Bridge design pattern and its example implementation could be found here.

💖 or 🦄 this article to show your support and motivate me to write better!
💬 Leave a response to this article by providing your insights, comments or wishes for the next topic.
📢 Share this article with your friends, colleagues on social media.
➕ Follow me on dev.to or any other social media platform.
⭐ Star the Github repository.

Once suspended, mkobuolys will not be able to comment or publish posts until their suspension is removed.

Once unsuspended, mkobuolys will be able to comment and publish posts again.

Once unpublished, all posts by mkobuolys will become hidden and only accessible to themselves.

If mkobuolys is not suspended, they can still re-publish their posts from their dashboard.

Once unpublished, this post will become invisible to the public and only accessible to Mangirdas Kazlauskas 🚀.

Thanks for keeping DEV Community 👩‍💻👨‍💻 safe. Here is what you can do to flag mkobuolys:

Unflagging mkobuolys will restore default visibility to their posts.