Previously in the series, I have analysed a design pattern that is commonly used in our day-to-day programming, sometimes even without considering it — Iterator. In this article, I would like to analyse and implement one of the creational design patterns — the Factory Method.

What is the Factory Method design pattern?

Factory Method, also known as Virtual Constructor, belongs to the category of creational design patterns. The intention of this design pattern is described in the GoF book:

Define an interface for creating an object, but let subclasses decide which class to instantiate. Factory Method lets a class defer instantiation to sub­classes.

That is, the Factory Method design pattern defines an interface for a class responsible for creating an object, hence deferring the instantiation to specific classes implementing this interface. This resolves the issue of creating objects directly within the class which uses them.

Also, it enables compile-time flexibility via subclassing. When objects are created within the class, it is very inflexible since you cannot change the instantiation of the object independently from the class — the class is committed to a particular object. By implementing the pattern, subclasses can be written to redefine the way an object is created.

Finally, this pattern removes the direct binding of application-specific classes into the code. As a result, the code only deals with the interface of specific objects created using factory methods.

To understand the Factory Method design pattern better, let’s dive in by analysing its structure and implementation in more detail!

The general structure of the Factory Method design pattern looks like this: 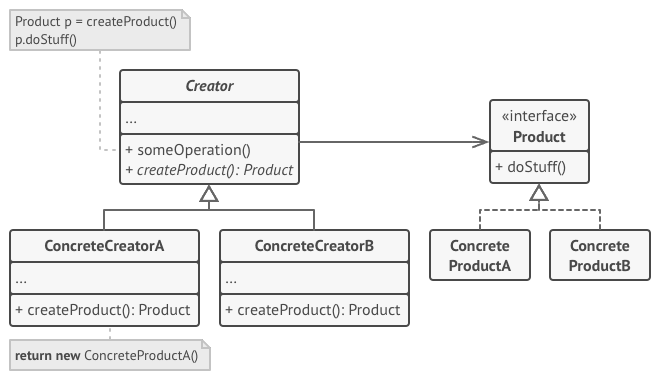 The primary purpose of the Factory Method design pattern is to separate product construction code from the code that actually uses that product. As a result, when you need to add a new concrete product, only a new creator subclass should be created which overrides the factory method. So this pattern is a great option when you don’t know the exact types and dependencies of the objects your code should work with.

As mentioned before, the factory method does not have to create a new instance of the object every single time. So if you want to save some system resources and reuse the already existing object instead of rebuilding it, implementing the Factory Method could be a way to go, e.g. by introducing a caching layer or storage which keeps the track of already created objects and returns the requested object when calling the factory method on a specific creator subclass.

Since you are reading this article, probably you have already used Flutter and/or want to get familiar with it (thank you, Captain Obvious). The main advantage of using Flutter is delivering applications for different platforms by using the same code base. However…

Even though you are using the same code base with Flutter, usually there is a demand that UI components should look different on different platforms. The simplest imaginable use case in Flutter context — showing the Material or Cupertino style widgets based on whether you are using accordingly an Android or iOS device.

To show an appropriate widget in the UI, you should check the current platform and then provide either Material or Cupertino widget (a simple if statement should work in this case). In general, this kind of implementation is inflexible:

The Factory Method design pattern offers a relatively simple solution to this problem: every platform-specific widget has its concrete creator subclass extending the common abstract creator class. By introducing this, the UI code should only care about the common interface (base class) of all the specific components and based on the current platform an appropriate factory method would be called to create the widget — the code does not have to reference specific implementations of these components anymore.

As an example of this approach, we will create a page where you can select the current platform (it is simulated using the radio buttons) and based on that an appropriate alert dialog (Material or Cupertino widget) would be shown.

The class diagram below shows the implementation of the Factory Method design pattern:

CustomDialog is an abstract class that is used as a base class for all the specific alert dialogs:

Widget, CupertinoAlertDialog and AlertDialog are the already implemented classes (widgets) of the Flutter library.

FactoryMethodExample contains the CustomDialog class to show the specific alert dialog of that type using the show() method.

An abstract class for showing custom dialogs. CustomDialog class implements the main logic to show the dialog (show() method). For the dialog creation itself, only the header of create() method is provided and every specific class extending the CustomDialog should implement it by returning a custom Widget object of that particular alert dialog. 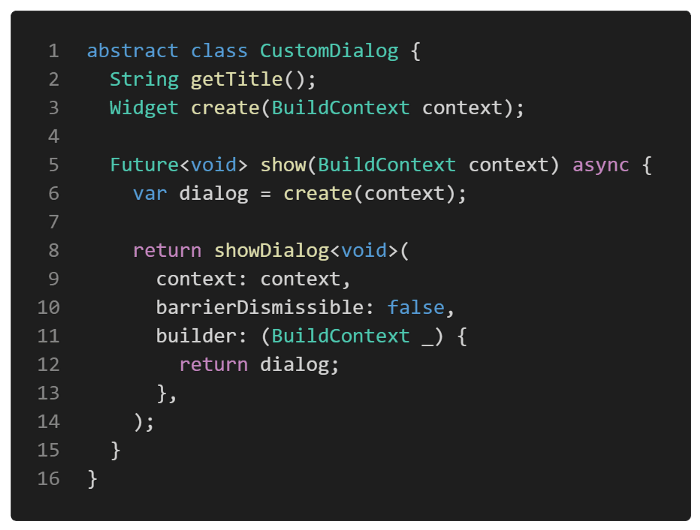 AndroidAlertDialog — a concrete alert dialog class that extends the CustomDialog and implements the create() method by using the Material AlertDialog widget. 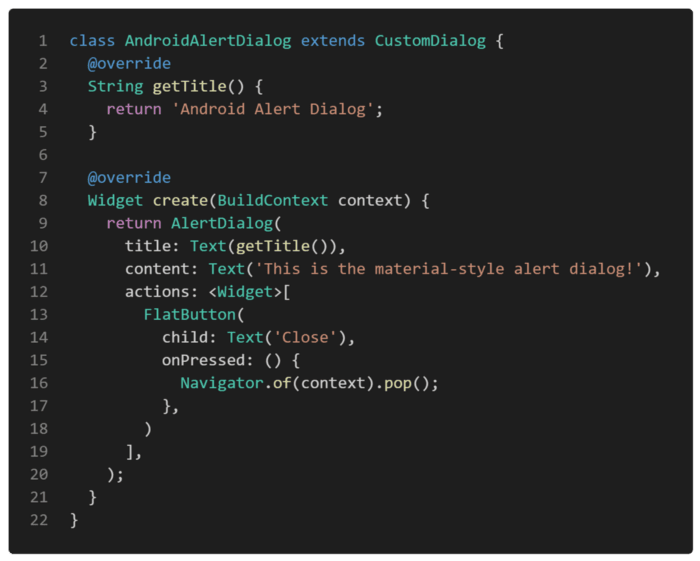 IosAlertDialog — a concrete alert dialog class that extends the CustomDialog and implements the create() method by using the Cupertino (iOS) CupertinoAlertDialog widget. 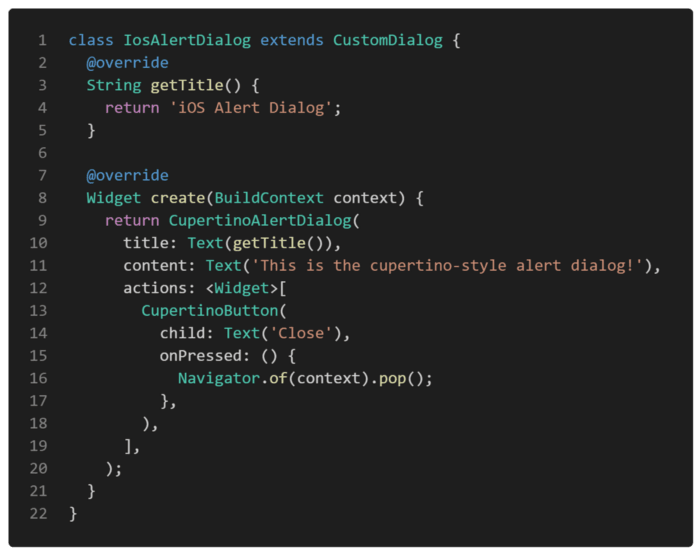 First of all, a markdown file is prepared and provided as a pattern’s description:

FactoryMethodExample contains a list of CustomDialog objects. After selecting the specific dialog from the list and triggering the showCustomDialog() method, a selected dialog is shown by calling the show() method on it. 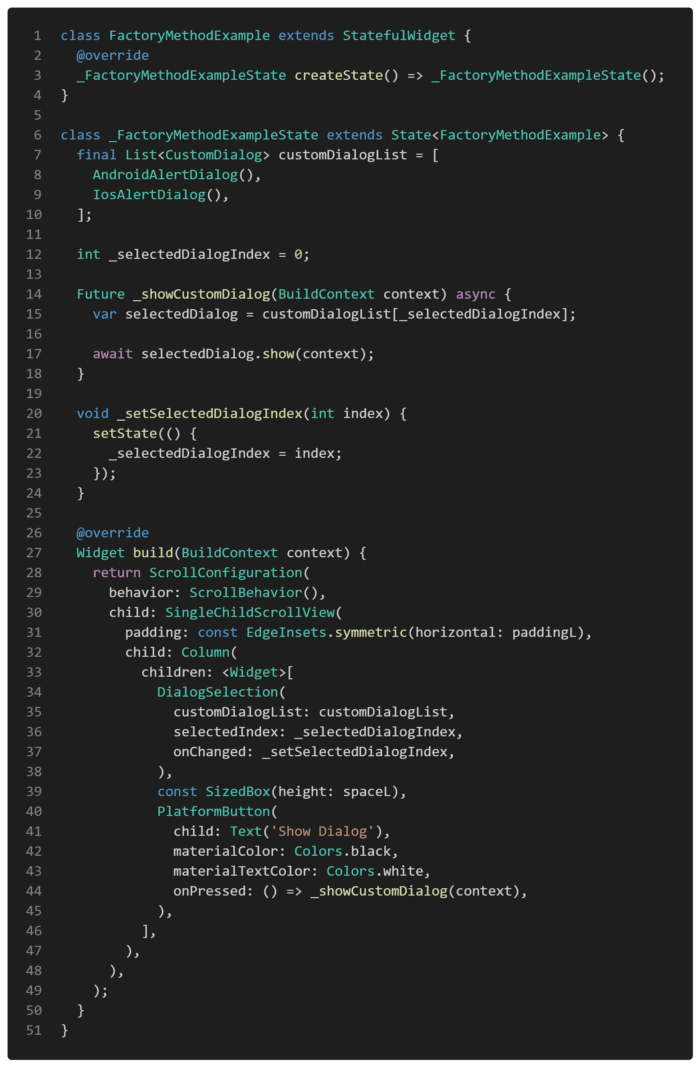 The final result of the Factory Method design pattern’s implementation looks like this:

As you can see in the example, by selecting the specific alert dialog style and triggering the ‘Show Dialog’ button, an appropriate dialog is created by the factory method and provided to the user.

All of the code changes for the Factory Method design pattern and its example implementation could be found here.

💖 or 🦄 this article to show your support and motivate me to write better!
💬 Leave a response to this article by providing your insights, comments or wishes for the next topic.
📢 Share this article with your friends, colleagues in social media.
➕ Follow me on dev.to or any other social media platform.
⭐ Star the Github repository.

Speed Log : the app to send parcel within persons.