In this post I am going to swiftly share some useful git commands, which I think will make your life easier while working with git :)

NOTE: Any modification will result to a new commit being created, with a different hash, thus rewriting history. Don't follow this practice for pushed commits, unless you are sure that no one has pulled your changes.

You just committed your changes and realized that you made a typo in the commit message. Run:

Git will open your editor, where you can change the message on the first line. Save and exit. Git will replace the old commit with a new one, applying any changes you have made.

In case you want to add more files to the commit, the process is essentialy the same. However, you need to have staged the new files before, by running git add . or git add <pathspec>.

Split one commit into multiple

So you've made commit A with features F1 and F2. And you realize that you might be better off having each feature represented in a different commit. You want to use interactive rebase for that.

Another alternative would be to stage files using git add -p, which lets you track individual changes in a file. This way you can create multiple commits off of one changed file, but this is beyond this article's scope. You can check this post for more information on how patch works.

Squash multiple commits into one

Oftentimes, you might end up with commits that are too "atomic" and maybe you want to meld them into one. Interactive rebase helps us with that, too. If we now want to squash the previously split commits Feature 1 and Feature 2, we are gonna have to do the following:

In the editor window you are going to see the commits listed in reverse order like this:

You now have two choices: You can either use fixup or squash.

Same as above, git rebase -i comes pretty handy when we want to delete or reorder commits, too. To delete, just change pick to drop on the commit you want to get rid of. To reorder, literally reorder the lines 😛

You can specify the commit when needed by either:

Use these with caution, since uncommited changes in general can't be recovered from deletion.

Everything is a mess and you decide to wipe every change you've made until now.

This actually does three things:

So, it will discard all changes, staged or unstaged. You can specify a commit, if you also want to go back in time.

Go back to a previous commit (without affecting changes)

While working on a feature, you might want to rewind to a previous commit, without affecting uncommitted changes made in your working tree (i.e. when you want to create a new branch from an older commit and bring your current changes). A soft reset will only move the HEAD, leaving your working directory and index file untouched. 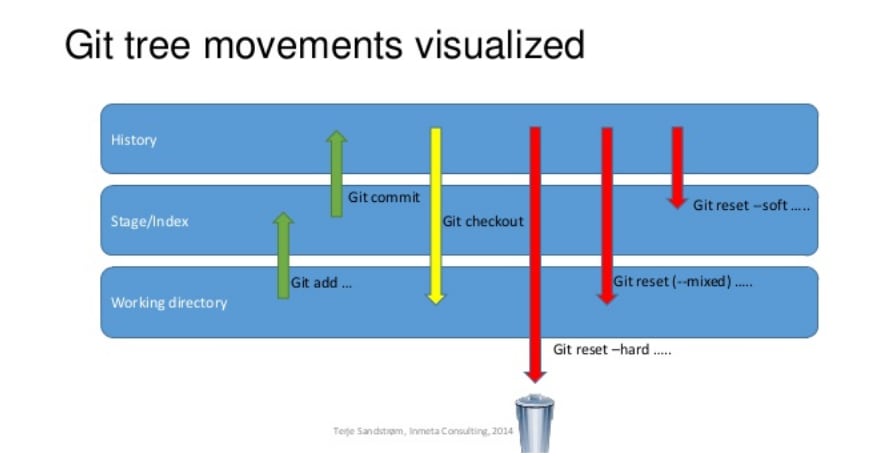 Thank you for reading! 🤓

If you liked this post, you can connect with me on LinkedIn.

Undo a merge or a rebase

Once suspended, mliakos will not be able to comment or publish posts until their suspension is removed.

Once unsuspended, mliakos will be able to comment and publish posts again.

Once unpublished, all posts by mliakos will become hidden and only accessible to themselves.

If mliakos is not suspended, they can still re-publish their posts from their dashboard.

Once unpublished, this post will become invisible to the public and only accessible to Emmanouil Liakos.

Thanks for keeping DEV Community safe. Here is what you can do to flag mliakos:

Unflagging mliakos will restore default visibility to their posts.