In my last post, we built a tic-tac-toe bot that would never lose a game! It was great, except it was really slow. It took over 30 seconds to determine the first move.

Lets optimize that using a simple technique to prune the amount of searching we perform for each move!

Why is our bot slow? It’s slow because it’s dumb. There’s no intelligence to how it goes about searching boards.

Lets take the following game board. 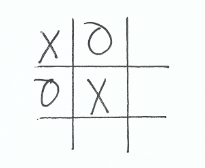 It’s X’s turn, what is X going to do? Obviously they’re going to play in the bottom right corner and win.

But our bot sees 5 potential moves X can make, and evaluates each one equally. It eventually picks the bottom right corner as the best move, but not before seeing and comparing all 5 moves against each other. Evaluating all moves equally leads us to do a lot of unnecessary work, which is the main performance problem.

Why doesn’t our last node have a value? It’s empty to demonstrate that the value actually doesn’t matter. We don’t need that node’s value to make the optimal decision.

Here’s how we would calculate it.

Even though we don’t know every node’s value, we know enough to stop further exploration.

That’s the core idea, stop searching down a particular tree when we are guaranteed to get a worse result than what we already have.

In this example, we saved exploring one node, not a big deal. The benefit comes in avoiding having to search entire subtrees. In more complicated games, such as Chess or Go, with branching factors of ~35 or ~250, anything we can avoid searching is a win!

Now that we’ve discussed the idea behind alpha beta pruning, lets look at the pseudocode.

The algorithm introduces two new variables, called alpha and beta (hence the name of the algorithm), that track each players current state.

If we get to the point where we realize, “hey this is worse than what we already know”, we stop searching. When we choose to stop searching down a path, we say that we’re pruning. Hence the name of the algorithm.

Lets take a look at what this looks like in our tic-tac-toe bot.

Lets start by taking another look at our invincibot.

For every board, we:

Lets implement alpha beta pruning for our tic tac toe bot now to do that.

You’ll notice it’s a mix of my previous bot code with the alpha beta pseudocode. Notable points are:

How Does It Perform?

If you remember from my last post, the optimal game of tic-tac-toe always ends in a tie. When two players play against each other who always pick the best move, the game ties. It’s only when a player makes a mistake that someone will win.

That’s what happened when we played our invincibot against itself, it tied all day long.

When we pit our abbot against itself and against invincibot, it also ties all day long.

So our bot makes the same optimal choices, but what about the number of board states explored? We coded our abbot in order to reduce the searching, which would help it play faster.

Here’s the decrease in boards searched through in invincibot compared to our abbot:

This means that roughly 95% of boards that our original bot search through for the first two moves were redundant. That’s an impressive reduction!

Implementing alpha-beta pruning drastically improved the performance of our bot. I really enjoyed implementing this and seeing this level of improvement.

I think next week I’ll look into implementing a Monte Carlo type search for our bot. While not necessary to solve tic-tac-toe, this technique is vital in tackling more complicated games.

If you’re interested in learning more about game playing bots and machine learning, follow me on twitter, I’ll be learning, writing and tweeting about it as I do it.

Deploy this tutorial and get $50 AWS credits!

Python Skills That Will Take Your Career to The Next Level