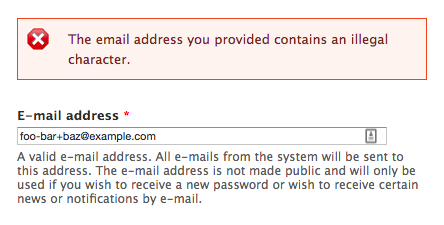 Since an email address is often the very first thing you ask of a visitor who wants to sign up, you're giving a bad first impression.

Not giving people an "unsubscribe" link

This includes giving people a link but going out of your way to make it inaccessible. Many emails, full of big garish CTAs, place the link they don't want you to press in a tiny font with a barely-contrasting colour in the middle of a dense footer?

Not having a working and clear unsubscribe link

When you follow the link, does it tell you that you have unsubscribed, and is it clear whether it means unsubscribed from all mailing lists or just one? Is it clear which email address was processed?

This includes not giving people the option of removing the email address completely or deleting your account.

Yes, even if you give the user a different way to reply. If you don't have the staff to handle an email support desk, it's not difficult to automate email processing, even for a single user hosting a small domain.

This means popups, popunders, interstitial reminders, fixed position banners... remember, if you hate them, your users hate them. And you hate them. Obvious stuff.

This is the worst sin, and I see it on

...and you want people to trust you, right?

What's the difference between a library and a framework?

Ben Sinclair
I've been a professional C, Perl, PHP and Python developer. I'm an ex-sysadmin. Back in the day, I had a geekcode which I'm not going to share with you. 418 I'm a teapot.
What is your win today?
#dailyretro #discuss #retrospective #improvement
What's your best productivity tip?
#discuss #productivity
The McDonalds Software Development Process
#discuss #productivity #hyperlambda