A box model describes how to measure an element for layout. It defines what size is and how it relates to the content, margin and padding. It may seem trivial, but clear definitions here are essential to building a UI engine.

This article is part of a series on Writing a UI Engine. 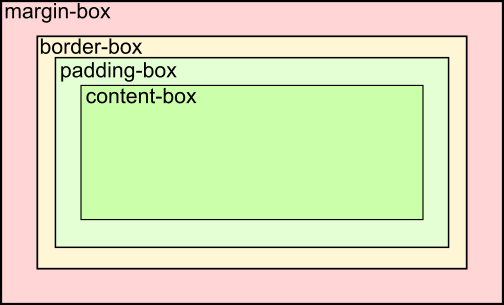 An ordinary box model comprises several boxes, each enclosing a smaller box. From inside to outside these are below, as in the CSS model:

These are general ideas of what the parts of the box model. The precise meaning is tightly coupled to how these interact with other elements and layout properties. Let's have a look at some of the possibilities.

I'll ignore the border-box. The layout engine I wrote did not have it, nor do I see substantial value in it, nor has anybody using the engine ever even mentioned it. I haven't found a UI that is simplified by having it.

What is the size of an element? Consider this UI fragment:

Does the rectangle cover an area of 20x40, or does the Padding add to the area making it 30x50 (5 applies to all sizes)? From a design perspective, it's more convenient to use the former approach, where changing the padding does not alter the size of that rectangle. It's easy to create the latter, additive model, by sizing the children instead.

If we change the padding on the rectangle, its overall size will change now. This happens because the child no longer expands to fill the size, but rather defines the size, and the parent adds the padding size. The box model necessarily depends on the definition of natural and dependent sizes, or we could instead say it's part of that definition.

To rephrase the above, does a Width property define the width of the context-box, padding-box, or margin-box? All of them make sense in some situations, but I can assure you the users of a UI system would scream at the complexity of a system that offers all of them. Additionally, it would be quite hard to write that UI engine -- the properties are not just aliases but end up with specific rules during box-sizing.

Defining Width to be that of the padding box seems like a reasonable, and natural choice.

CSS is notorious for the box model getting in the way or having the wrong definition of properties. A lot of that is likely attributable to missing layouts, not necessarily the box model itself. If you are designing a new layout engine, it's good to keep the troubles in mind and make sure you don't duplicate them!

In a flow-based layout, such as HTML, we may define collapsing margins. 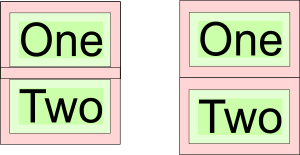 For flowing layouts, especially for text, collapsing margins can make sense. In this mode, they become more of a minimum space from surrounding elements, rather than an added space. For typical application layouts, additive margins are easier to implement and provide more consistency.

The goal of collapsing margins can be achieved in other ways. In a listing, you may wish to have an equal amount of space between items. I achieved this with an ItemSpacing property.

In this approach, the StackPanel decides the spacing between the items, rather than the items deciding. Each item may still use a Margin to give itself additional space. I also defined a CellSpacing for grids and ColumnSpacing for column layouts. Each layout type may have a ...Spacing property.

We need to define two points that determine the placement of an element: where in the parent, and what point in the child is placed there (the anchor).

This leads to the question, top-left of what? In this case, we're usually speaking about the margin-box. The content of an element aligned to the top-left is separated from the corner by the size of its margin. That makes sense. What about a margin applied to a centered element? That's a bit weird, but the engine better have it well defined.

And what about explicit anchors? I've presented these before in reference to CSS. They are a valuable addition to layout. For example, you may wish to have the top-left of an image aligned to the center of the parent.

Or perhaps you're decorating a panel with a caption floating off the bottom.

I'll have to come back to placement, in particular, anchoring, when we get to implementation. I realize now it's perhaps more complicated than these few paragraphs here.

This article introduces the box model but doesn't offer a complete definition. As we go further in layouts, we'll continue to refer to the box model and define behaviour in relation to the content-box, padding-box and margin-box.

The box model will also be referenced when we talk about rendering and hit testing. A lot of properties refer to position and size, often to different boxes. Coming up with a consistent definition and behaviour will save the engine users a lot of headaches when designing layouts.

I'm a creative writer and adventurous programmer. I cook monsters.

Trending on DEV
What is your favourite programming language and what do you like the most of it?
#watercooler #discuss #developers #programming
Improve your web typography with a few solid tips
#webdev #design #typography
How To Become Productive When Coding.
#productivity #coding #job
Official Website is Live 🎉 - Built with TailwindCSS and AlpineJS and lots of 💗
#css #design #beginners #webdev
Why do only posts in English have relevance on Dev.to?
#discuss #techtalks
14 Developers to Follow on Twitter
#webdev #beginners #motivation #career
Developer Fears: Legacy Code
#fears #legacycode #career #coding
Was I a Developer or an Engineer?
#computerscience #career #engineering