I use GitLab's CI/CD free feature to automatically run code in the cloud.

Every now and then I come across the need to automate a task (written in code) to be performed periodically, so that it'll run by itself, without my intervention.
Such tasks can be submitting an online form, scraping data from a website, running some script that updates something else online, etc.
I obviously don't want this code to run on my computer, as it is not on and ready all the time, nor do I want to setup and plug in a Raspberry Pi device or alike just for that.

Now, running it periodically sounded like a very simple and straight-forward task, but it turned out to be a bit tricky! After some research (not too much, I admit), I was not able to find a free and easy-to-use tool / service that would allow me to have some piece of code run periodically in the cloud. I did not want to pull out the bigger guns such as AWS or GCP just in order to setup a tiny serverless function either.

My solution was to turn to GitLab's awesome CI/CD-as-a-service feature - which I know very well already and have used in many other personal / work project.
This feature, in a nutshell, allows you to define a .yml file with your CI/CD pipeline configuration in a repo, and have set it to run in any automatic schedule (or with a trigger). A pipeline is composed of jobs, which run any script you need in any container.

So in that case, all we need to do is:

Add the task itself

For this example, let's create this run-me.js file:

You can either clone the repo that you've just created and commit-push the task's file from your computer, or easily enough add it straight into gitlab.com using their nice "Web IDE": 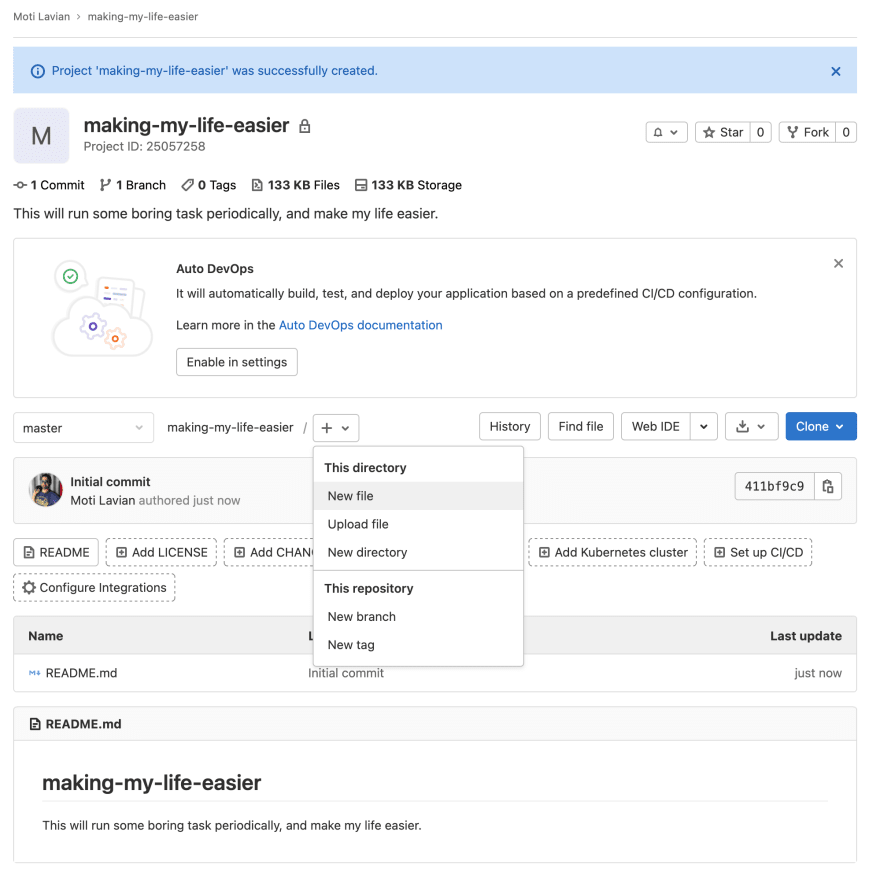 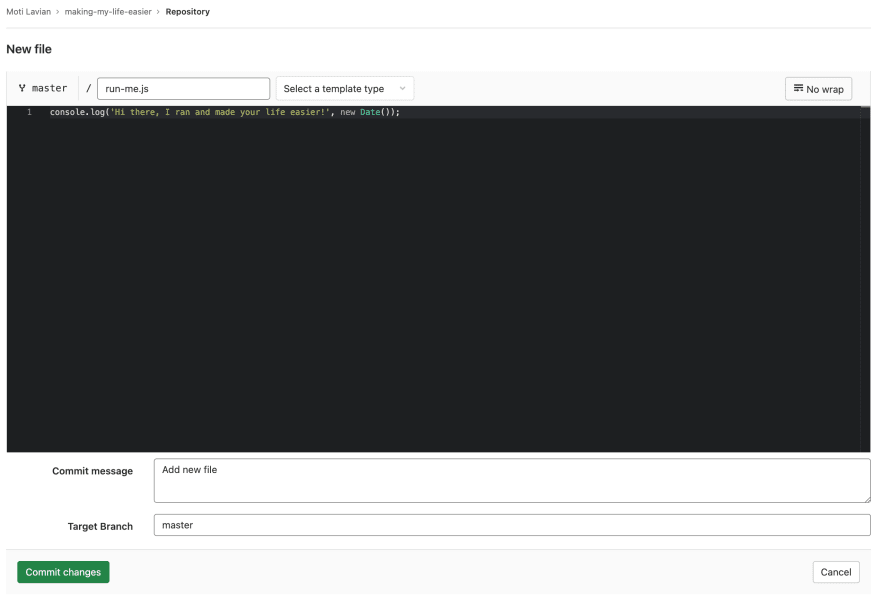 Commit the changes, and now you have the task's code in the repo - this code will be available inside the container that will run the pipeline.

Set up CI/CD to run your code as you wish

The same way you did in the previous step, add another file called .gitlab-ci.yml.
GitLab offer some useful templates, but in our case, we'll just go ahead with a blank file, and in it add your definition for container image, and what to run in it (including the task you wrote): 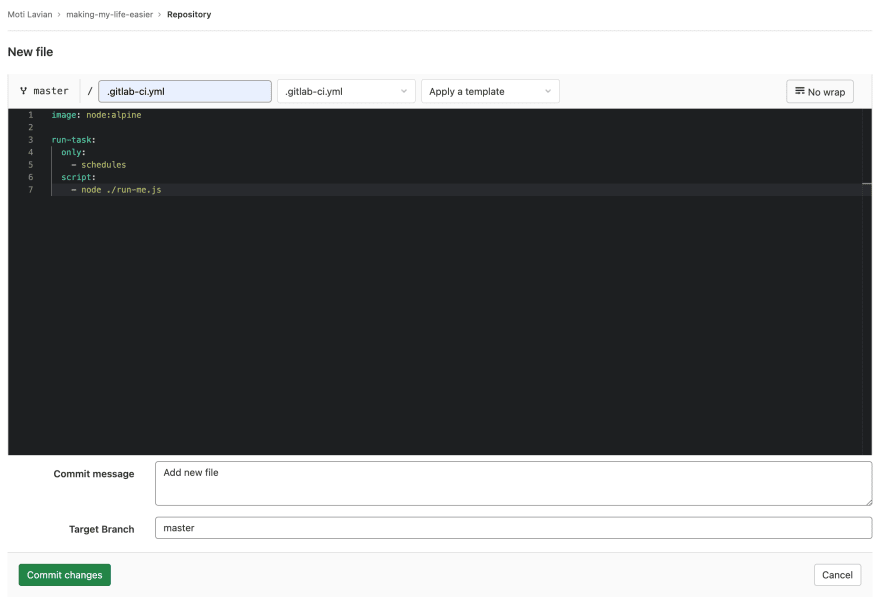 For testing, you can go to https://gitlab.com/YOUR_GITLAB_NAME/YOUR_PROJECT/-/pipelines/new and (provided that you commit to master) start a new pipeline manually.

After running, you can go to https://gitlab.com/YOUR_GITLAB_NAME/YOUR_PROJECT/-/pipelines, and see a new line with the pipeline that has started:

The pipeline will fetch and run the node:alpine image, and then execute our code from run-me.js inside it 💪. 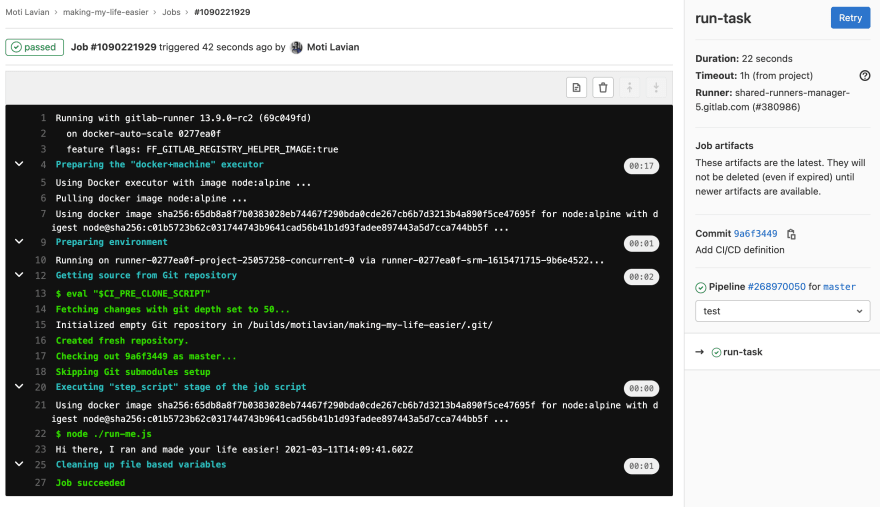 This is already awesome, as you can now run any code inside a container in the cloud!

In order to schedule it, go to https://gitlab.com/YOUR_GITLAB_NAME/YOUR_PROJECT/-/pipeline_schedules/new, and create a new schedule for this repo's pipeline.
In this example, let's say we want it to be Sunday to Friday at 7:30 AM, which means setting a custom interval pattern as 30 7 * * 0–5. If you need help with cron syntax, check https://crontab.guru. 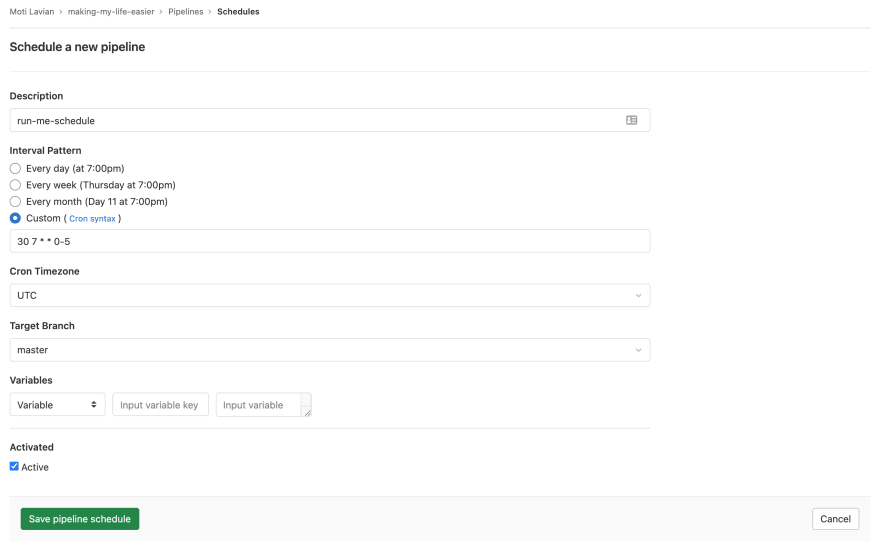 Save the pipeline schedule and you can expect it to run surely and independently ☁️.

How to debug artifact passing on Gitlab easily

Installing WSL on another drive in Windows

Once suspended, motilavian will not be able to comment or publish posts until their suspension is removed.

Once unsuspended, motilavian will be able to comment and publish posts again.

Once unpublished, all posts by motilavian will become hidden and only accessible to themselves.

If motilavian is not suspended, they can still re-publish their posts from their dashboard.

Once unpublished, this post will become invisible to the public and only accessible to Moti Lavian.