Scope basically means " the chance or opportunity to do something". But what does it mean w.r.t JavaScript, and how do JavaScript engines interact with it to process any line of code. Let's find out-

Scope collects and maintains a look-up list of all the declared identifiers (variables), and enforces a strict set of rules as to how these are accessible to currently executing code.
To understand this, let's briefly see how compilation works for a piece of code that the Engine encounters.

This involves breaking up a string of characters into small chunks, called tokens. For example, const foo = 4; may be broken into const, foo, =, 4, and ;.
A tokenizer breaks a stream of text into tokens, usually by looking for whitespace (tabs, spaces, newlines). A lexer is basically a tokenizer, but it usually attaches extra context to the tokens -- this token is a number, that token is a string literal, this other token is an equality operator.

Turning a stream(array) of tokens and turning it into a tree of nested elements, which collectively represents the grammatical structure of the program. This tree is called Abstract syntax tree.
To see how an AST looks like follow this link.

This involves taking an AST and turning them into executable code.

The JS engine is vastly more complex than just these three steps. For instance, there are steps to optimize the performance of the execution which we'll cover in another post. But when do scope comes to picture during these steps 🤔.

Here's when scope comes to the picture

Consider this expression const foo = 4;. Once the compiler is done with tokenizing and parsing this expression, it'll go for code generation, and proceeds as follows:

If the Engine eventually finds a variable named foo, it assigns the value to it. Otherwise, it will raise a ReferenceError.

Consider the functions bar() and fam() in above program.

On encountering console.log(b); in bar() Engine will ask Scope if there is a variable named a accessible in bar()'s scope collection. Scope will say "Nope, never heard of it. Go fish". Then the Engine will ask the same question to baz()'s Scope, and here is what it says "Yep, it's there. Here ya go".

The same steps are followed while running console.log(a); in fam(). The only difference is, Engine won't find the variable until it reaches the Global scope, where it'll find a.
Next, I'll try and run console.log(c); but won't be able to find it in the Global scope collection either. At last, the Engine will raise its hand and yell out a ReferenceError

Here is a representation of the flow: 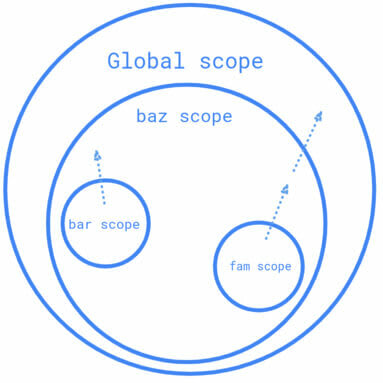 Once suspended, mpratapdev will not be able to comment or publish posts until their suspension is removed.

Once unsuspended, mpratapdev will be able to comment and publish posts again.

Once unpublished, all posts by mpratapdev will become hidden and only accessible to themselves.

If mpratapdev is not suspended, they can still re-publish their posts from their dashboard.

Once unpublished, this post will become invisible to the public and only accessible to Mahesh Pratap.

Thanks for keeping DEV Community 👩‍💻👨‍💻 safe. Here is what you can do to flag mpratapdev:

Unflagging mpratapdev will restore default visibility to their posts.