This is the second in a short series of blog posts where I will go beyond the introductory level and dig a bit deeper into using the Fluxor library in a Blazor Wasm project. If you haven't read the previous posts, please start there.

Let's get to some code, shall we?

I'll be illustrating these examples using the Blazor WebAssembly, ASP.NET hosted template in Visual Studio 2019 Community. I'm a big Visual Studio, so that's my preferred IDE, but you can use Visual Studio Code instead if you prefer. Just execute dotnet new blazorwasm -ho in the command shell. The -ho indicates the "ASP.NET Core hosted" option. In Visual Studio 2019, this is what I'm using: 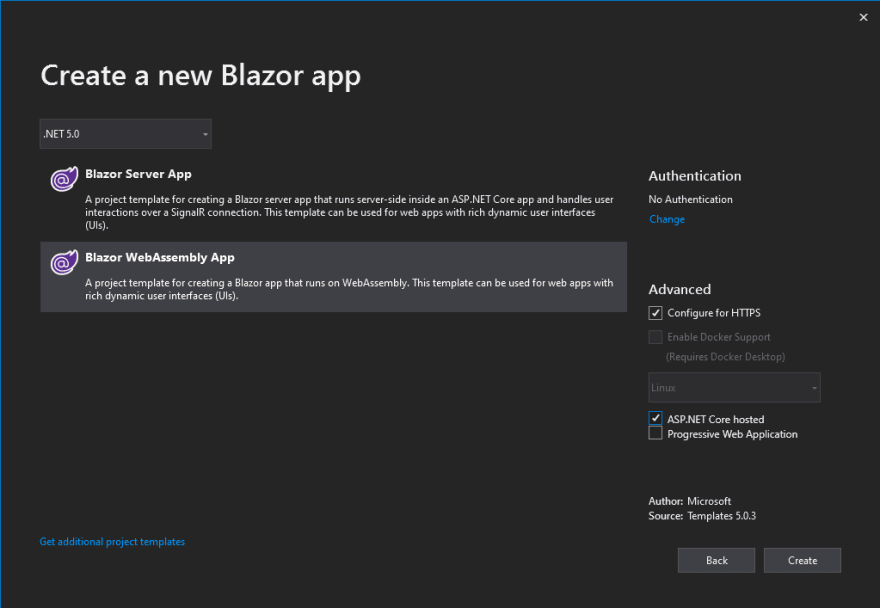 If you build and run at this point, you'll see an application with a Counter page that exhibits the state-losing behavior I noted in the previous blog post:

Before we begin: The code for this blog series can be found on github as shown below. To check your progress for this step of the series, view the 002_Add_Fluxor_Libraries branch.

To add Fluxor to the project and begin our state-management journey, first install the Fluxor.Blazor.Web Nuget package to the .Client project in the solution:

Alter the Program.cs file to include this line, just above the line that begins "await builder.Build()"

and the accompanying using statement at the top:

For convenience, add a couple of Fluxor using statements to the _Imports.razor file:

To initialize Fluxor when the application is started, we add this to the very top of the App.razor file:

And finally, update the wwwroot/index.html to include just above the </body> tag:

And with that, Fluxor is ready to be used. Let's update the Counter page to take advantage.

Note: This is the first point at which I diverge from the introductory videos I referred to in part 1 of this series. They both proceed by creating a "Store" folder at the root of the project, with a "Counter" subfolder, and placing the Counter Store files there. I prefer the feature-oriented folder structure that follows.

Create a folder at the root of the solution named Features, and another folder inside of it named Counter. This will be the place where we keep all of the files related to the Counter.

In the Counter folder create two more folders named Pages and Store. Move the Counter.razor file from the \Pages folder into the \Features\Counter\Pages folder. Your Client project should look like: 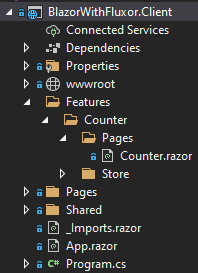 Next let's create the Store.

A Fluxor Store consists of 5 pieces:

Note: This is the second place where I significantly diverge from the introductory videos. They follow the common C# convention of 'one class per file', which I usually also follow, but I think this situation, where none of these classes should really exist without all of the others, is a good example of when it's fine to group multiple classes together in the same file.

In the \Features\Counter\Store folder create a file named CounterStore.cs. Remove the class CounterStore; we're not going to need it. This file will instead hold all of the Store pieces listed above.

In the new CounterStore file, add a record to store the state of the Counter. We only need to track one property: the current count.

Note the CurrentCount property doesn't have a setter. It's inherently read-only, as is the intention in the Flux pattern.

Below the state we add the Feature class to expose the CounterState to Fluxor. This will require a using Fluxor; statement at the top of the file.

The Fluxor class Feature<T> has two abstract methods we must implement. One returns the name that Fluxor will use for the feature, and here I recommend a simple human-readable string that will uniquely identify the feature for this application. The second sets up the initial state of the State. We'll start with a CurrentCount of zero.

Now we need an Action to dispatch when the button is clicked, instructing the store to increment the counter. Below the Feature, add this class:

This class doesn't need any properties, since its name includes all the information needed by the Store to know what to do.

Note: I recommend a naming convention for Actions in the form of FeatureActivityAction where Feature in this case is "Counter", Activity is "Increment", and Action distinguishes the class as an Action. The reason for this is that eventually you may have a lot of Features, and if many of them have an Action class named public class Initialize {} then there is a decent chance of name clashes and confusion later. Naming your Actions this way keeps that from happening and makes it easy to keep track of all the pieces of the Store.

And finally, we need a Reducer method to handle the CounterIncrementAction when it is dispatched. Add this class to the Store file:

Note that this is a static class, and the ReducerMethod is a static method. This is intentional since a Reducer method should be a pure method with no side effects. It takes in the current State (the CounterState state parameter) and returns a new State with new values based on the Action it's handling. The Reducers class itself contains no state.

There are two ways to declare a ReducerMethod as it relates to the Action it is subscribing to. The most common way is to provide both the State and the Action as parameters to the method, like so:

However, in the case of an Action with no payload, such as with CounterIncrementAction, the action parameter will not be referenced in the body of the method. Depending on your compiler settings, this may result in an 'unused parameter' warning. The alternative [ReducerMethod(typeof(Type))] attribute that takes an Action Type is a way of providing the same behavior without the compiler warning.

Note: I recommend a naming convention of OnActivity for the names of the Reducer methods. The name of the Reducer class and methods don't really matter to Fluxor, as they're identified by scanning for [ReducerMethod] attributes, but having a consistent and meaningful name is useful to the developers working on the application. Having a FeatureActivityAction action handled by an OnActivity Reducer method is easy to remember and understand.

With all of these pieces in place, the CounterStore.cs file should look like this:

With the CounterStore in place, we're ready to update the Counter.razor page to use it.

In the Counter.razor file, just under the @page "/counter" directive, add:

This allows the Counter component to access the Fluxor resources.

Since we're going to need to reference the CounterStore, we need to add a using statement:

We'll need to access the CounterState, and in order to dispatch Actions we'll need a Fluxor Dispatcher, so we inject these:

We remove the local count property and replace it with a reference to @CounterState.Value.CurrentCount (the IState<T> wrapper exposes the wrapped state object using the .Value property) and replace the counter++ with a call to Dispatcher.Dispatch(new CounterIncrementAction());. The resulting file should look like:

If we build and run the application, we should see the fruits of our labor:

Once the CounterStore is set up and running, it's not just the Counter.razor component that has access to it; any component in the application can reference it. As an example, let's the CurrentCount to the Nav Menu.

Update the \Shared\NavMenu.razor component to include the necessary Fluxor hooks at the top of the file:

Then change the NavLink label from Counter to Counter (@CounterState.Value.CurrentCount), getting a read-only reference to the CurrentCount property of CounterState.

Ok, one more thing before moving on to the more advanced stuff.

And enable it in the Program.cs by adding .UseReduxDevTools() to the AddFluxor options like so:

After all of these steps, the solution should look like this branch of the demo repository.

In the next part of this series, I will "featurize" the template's Weather Forecasts component while using a Fluxor Effect method.

Easily Track the Progress of Your Work Using the New .NET MAUI ProgressBar

Once suspended, mr_eking will not be able to comment or publish posts until their suspension is removed.

Once unsuspended, mr_eking will be able to comment and publish posts again.

Once unpublished, all posts by mr_eking will become hidden and only accessible to themselves.

If mr_eking is not suspended, they can still re-publish their posts from their dashboard.

Once unpublished, this post will become invisible to the public and only accessible to Eric King.

Thanks for keeping DEV Community 👩‍💻👨‍💻 safe. Here is what you can do to flag mr_eking:

Unflagging mr_eking will restore default visibility to their posts.