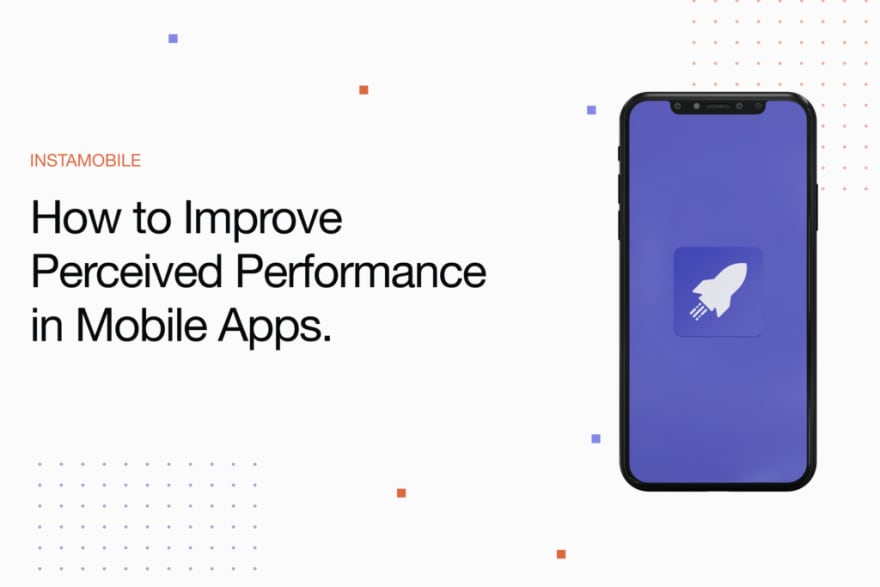 Perceived performance tends to be overlooked by most app developers, especially for the first few releases of a new mobile app.

Perceived performance techniques can take your app from being "just fine..." to being "amazing!". Compared to the traditional website, there are a lot of things that can go wrong in a mobile app, such as:

On web, the browser usually takes care of handling all these unfortunate states, through techniques such as refreshing the website, showing loading spinners, showing error messages, etc. In mobile apps, the responsibility for improving the perceived performance by addressing all these issues goes to the developer. To improve the perceived performance of our mobile apps, we need to avoid or address all the issues listed above. In some cases it's simply graceful degradation, in other cases it's brilliant optimizations. Let's get started.

Loading states help users visualize the fact that there is some action going on in the app, for which they need to wait. Not using a loading state for an expensive background operation can create the impression that the app has frozen, which is suboptimal UX. Nobody likes a laggy UI. The most popular expensive operations that require loading states are network requests and image downloads. Additional operations for which you should consider treating the loading state can be reading from disk (can be very slow especially on low-end devices) or hitting the local database (e.g. SQLite). There are a few smart ideas on how to treat loading states in mobile apps, all of which drastically increase the perceived performance.

You can check out this approach in production, in this Uber Clone.

Empty states are screens that lack the information they were primarily designed for. A good UX treats these empty states gracefully. Beautiful empty states are boosting the perceived performance of your mobile app, making it more lively, fancy and positive. They also inform the user precisely with what's going on, and therefor reducing frustration. Empty states represent a huge growth opportunity as well. Take advantage of empty states, by upselling important critical actions to the user, such as adding friends, writing a post or taking a photo, which can improve your app retention greatly. 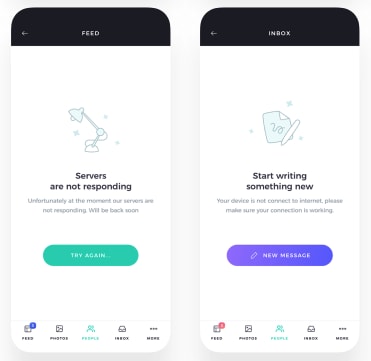 Haptics is a technology that allows users to receive tactile information through one's sensations. Mobile phone vibration is the most popular form of haptics feedback technology. Put it simply, you can improve the perceived performance of specific actions in your app, by generating vibrations to the user. This results in a greater user experience and gives the user a subtle sense of satisfaction, making your app more snappy and enjoyable. Use haptic feedback vibrations for actions that are important in your mobile app.

A social network such as Instagram or Twitter might use it for actions such as following someone or liking a post. Haptics feedback is overlooked in general, by most developers, especially by those with a web background (understandably).

Don't abuse it though. Generating haptics feedback for too many actions would easily frustrate your users, and you'll end up with the opposite effect. Keep in mind that haptics feedback also drains the device battery faster. Just use it for important core actions, as a way to encourage your users to take that action more frequently.

For example, at Instamobile, we use haptics feedback for actions such as follow/add friend (in social network apps, such as the React Native Facebook Clone), add to cart (e-commerce), swipe right (dating), send message (chat), etc.

Animations are part of the core mobile experiences. You must apply them in your mobile apps for any visual transition. Animations are a key differentiator factor between native mobile apps and their web counterparts.

To improve the perceived performance of your mobile app, try replacing standard UI components, such as activity indicators, progress bars or HUDs with cool and interactive animations.

Even if you still go with the standard, more traditional design units, you can still leverage the power of animations, by smoothing out their transitions, such as by fading in/out or translating. Animations are easy to create nowadays, with powerful tools such as Lottie, and by amazing native support (in all mobile development languages, including the cross-platform ones such as React Native, Kotlin, Swift or Flutter).

It goes without saying that users need to see feedback for their actions, especially for those that take a lot of effort. Communicating clearly to users what went wrong and why (via error messages) reduces their frustration. Informing them when something went well (via success messages) gives them a positive sense of reward. There are a several standard mechanisms to improve the perceived performance via success and error messages, such as:

I generally recommend using dialogs for error messages, and a toast or a feedback HUD for success messages. A success message usually doesn't need a call to action, so you literally save your users a click, improving the user experience in a subtle way.

Optimistic updates are UI updates that behave as though a change was successfully completed before receiving confirmation from the server that it actually was. It's being optimistic in the sense that the app will eventually get a confirmation from the server rather than an error. This makes the user experience way more responsive. Think about the Like button of a social network app.

In 99.99% of cases, the like action succeeds, but a roundtrip to the server takes more than 1 second in average. So why would we wait to update the Like button after server's confirmation, right?

Optimistic updates are massively improving the perceived performance of your mobile apps, by creating the impression that user actions are executed instantly, rather than waiting for a server roundtrip to get the real confirmation.

Another amazing way to boost the perceived performance in mobile apps is to add support for offline mode. This is extremely helpful for apps that are used by users who are in transit, commuting, taking the subway, etc.

Again, this is not something applicable on the web, so most developers tend to overlook such as killer mobile feature. There are three things that we need to consider and implement when thinking about offline mode in mobile apps:

Network failures happen all the time, for a variety of reasons. Before displaying error messages to the users, consider an auto-retry mechanism, that takes place in background without interrupting the user activity.

This can reduce the error messages shown to the users drastically, and therefore improving the perceived performance of your app. You should experiment with the number of retries per network request, but please be considerate of the user's data and battery.

This an amazing, quickly to implement trick of improving the perceived performance of your cold start massively. Straight from the Apple's Guidelines on the launch screen: 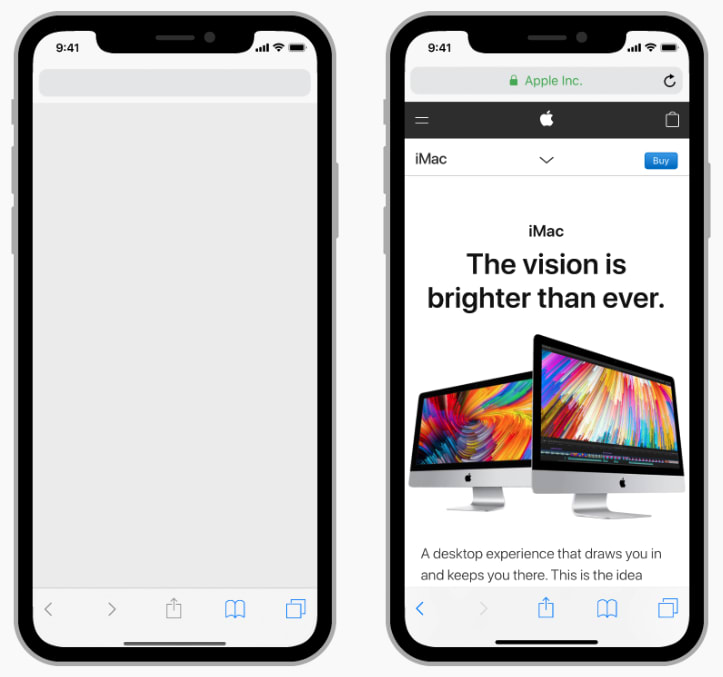 An app with a splash screen designed this way feels like loading twice as fast to the end user, so take advantage of this tip to quickly improve your perceived cold start times.

Building great mobile apps is much harder than building regular websites, for a variety of reasons. As a mobile developer and designer, there are many states that need to be considered in order to make apps feel snappy and highly performant. Perceived performance is the best indicator of how well executed a mobile app is.

It affects growth, retention, user happiness and in the end, your success. Design mobile apps with native experiences in mind, and keep track of all these tips and tricks that are improving mobile app performance, in order to launch amazing apps, that are optimized for user experience.

There are a multitude of techniques on how to improve the perceived performance in mobile apps, so use them wisely and make sure you are consistent. No one likes an app with ten different types of loading spinners.

Improving perceived performance is an art, so use these UI components creatively and don't abuse them. Lastly, if you enjoyed this article, please share it with your community on social media and blogs.

If you are interested to see how various apps are leveraging these design concepts, check out this comprehensive list of the best mobile app templates available on the market.

Once suspended, mrcflorian will not be able to comment or publish posts until their suspension is removed.

Once unsuspended, mrcflorian will be able to comment and publish posts again.

Once unpublished, all posts by mrcflorian will become hidden and only accessible to themselves.

If mrcflorian is not suspended, they can still re-publish their posts from their dashboard.

Once unpublished, this post will become invisible to the public and only accessible to mrcflorian.

Thanks for keeping DEV Community 👩‍💻👨‍💻 safe. Here is what you can do to flag mrcflorian:

Unflagging mrcflorian will restore default visibility to their posts.