Last week I was given the task of creating a single page application for a class project using a Javascript frontend with a Rails backend. After some brainstorming on what exactly I could build, I decided to attempt to create a video game. Ever since I could remember I was playing video games, whether they were simple flash games on websites or bigger ones on specific consoles. I have always wanted to learn about how these games were made, but had no knowledge on the subject for the longest time. Now that I had a couple months of coding experience under my belt, I thought that it was a good time to explore the surface of video game development.

While researching how to actually create a video game using Javascript, I found that there were various ways to do so. One of the more popular methods was to use the canvas that was provided in Javascript to act as the window for the game itself. I also learned that the whole process behind writing code to deal with the physics aspect of the game was tedious and quite difficult to do, especially in a week. This is when one of my fellow classmates suggested using something called Phaser to lighten the burden on my end during this whole process. Phaser is a free, open-source framework that uses Javascript and specifically caters to video game development. It is data-oriented and provides users with a full body physics system, so that they don't have to code that part themselves. It also comes with essential elements needed to create a functional game such as input control and a mechanism to animate images whether they are static or dynamic.

To begin the project, I first had to come up with an idea of what the game should actually be about and how it should function. As some of you may know, there is a hidden game on Google Chrome when there is no connection to the Internet. It is an infinite scroller where users control a dinosaur and try to avoid obstacles while earning points the longer they stay alive. I decided to take this concept and make my own version of it called Dino Dash. As a single page application, I wanted users to be able to enter their name when they first visited the site, transition to the actual game after, and finally have their scores saved to a table once they were finished. 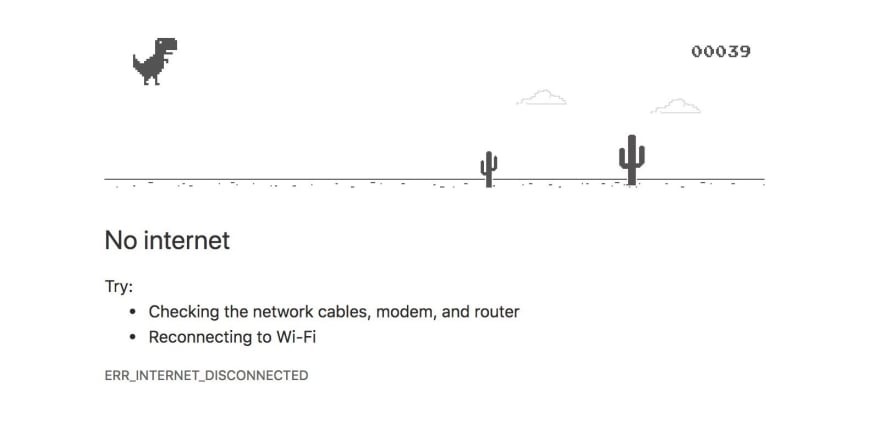 Included in the frontend is an index.html file which is used to render the initial page that users see to input their names. It also has all the Javascript files for the entire game. I decided to organize the game into three key files title.js, game.js, and main.js. 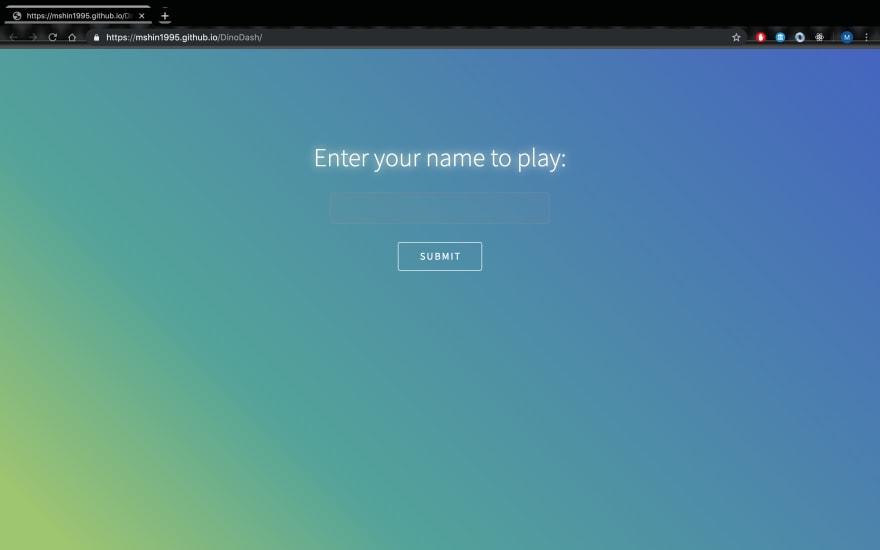 Starting with title.js, like the name states, this file is responsible for the opening scene of the game. It renders a play button that once pressed moves on to the next scene in game.js.

Within game.js is where the essential code that makes the game actually function is located. The code within this file is split up into three components that Phaser gives us. These components are preload, create, and update, which run in that exact order when initialized. The preload part of this file is responsible for loading in all the assets that the game will utilize. These include anything from images, spritesheets, and sounds.

The create component is where the assets that got loaded are actually rendered and displayed to be seen. It is also where the logic behind the game is programmed, such as what position the player should start at, what objects should be able to collide with one another, or what event is triggered upon certain objects colliding. Moving on, the update component includes the functionality of the game. An action caused by the player will trigger an event associated with that action and update. The most common example of this functionality would be if a player pressed down on the right arrow key, the action will trigger an event that updates the position of the character to the right. Including animations for this event will make the position updating even more seamless.

The final file main.js is what brings everything together. It is where the entire game is initialized in an html canvas using the two files above. Both title.js and game.js are imported as two separate scenes then combined. This is also where I decided to write my fetch requests. One of them gets existing usernames and their scores from the database in the backend and sorts for the top ten scores to display on the table. The other fetch posts a new user with a score of 0 to the database when they initially enter their name on the home page. Within game.js is another fetch request that posts a user's new score to the database once they restart the game upon death.

Overall, I had a great time finishing this project and learning more about game development. Although I used Phaser for a lot of the heavy lifting, I still felt that my knowledge of Javascript improved. I started to learn React earlier this week and I was pleasantly surprised to find that my experience using Phaser was somewhat applicable, especially in the importing and exporting of files. The preload, create, and update functions that Phaser give are also similar to how lifecycle methods work in React. Moving forward, I definitely want to try making different types of video games using Javascript.

Check out my code:
https://github.com/mshin1995/DinoDash

Once suspended, mshin1995 will not be able to comment or publish posts until their suspension is removed.

Once unsuspended, mshin1995 will be able to comment and publish posts again.

Once unpublished, all posts by mshin1995 will become hidden and only accessible to themselves.

If mshin1995 is not suspended, they can still re-publish their posts from their dashboard.

Once unpublished, this post will become invisible to the public and only accessible to Matthew Shin.

Thanks for keeping DEV Community 👩‍💻👨‍💻 safe. Here is what you can do to flag mshin1995:

Unflagging mshin1995 will restore default visibility to their posts.