If you have been around the front-end scene for a while, you probably know that a few years ago being a front-end developer meant that you handle HTML, CSS and maybe some basic Javascript, whereas backend logic was done with languages like PHP. Nowadays, the term front-end developer has broader usage.

Two sides of the front-end 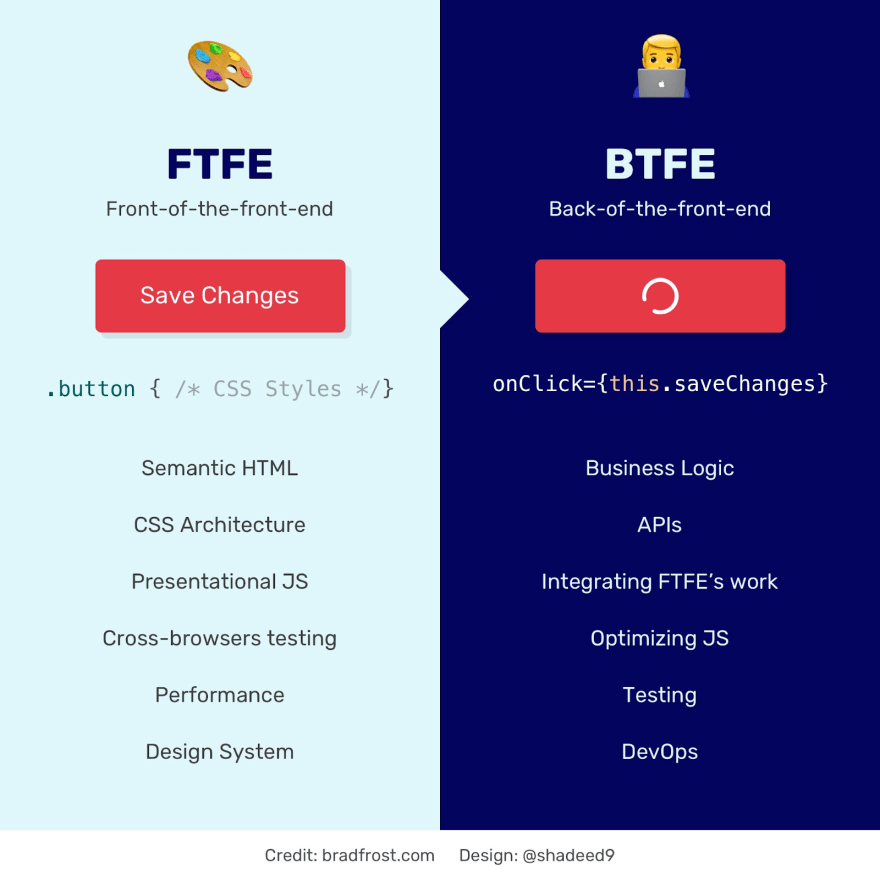 A front-of-the-front-end developer is a web developer who specializes in writing HTML, CSS and presentational JavaScript code.

A back-of-the-front-end developer is a web developer who specializes in writing JavaScript code necessary to make a web application function properly.

Often those who only maintain a skill set of HTML/CSS are falsely mistaken as inexperienced developers which is not the case. A front-end developer shouldn’t feel pressure to learn Javascript if they want to focus on the visual aspect of the front-end rather than the functionality side of the front-end.

Let’s take a look at this picture: 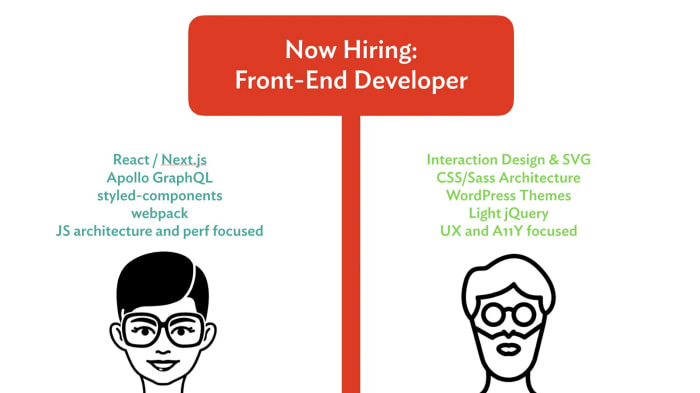 In many social situations people often ask us ‘What do you do?’ When answering the question, you would probably say something along the lines ‘I am a developer’ or ‘I build web applications’.

Now instead, you should approach that question with why you do what you do. Take a moment to think of your why. What is something that really sparks joy in you when developing? The answer could be something ‘I love crafting beautiful and accessible online stores to make online shopping a better experience for everyone’.

Now that we have explored the two sides of the front-end and took a moment to understand your whys, it’s easier to choose the path to continue on or identify the path you’re currently on.

If what you prefer to write is semantic and accessible HTML, you know CSS/SCSS architecture and build pleasant layouts, you’re probably a look & feel oriented developer who fits in the front-of-the-front-end category.

If you prefer writing complex Javascript logic, working with modern Javascript frameworks and APIs, you’re probably a functionality oriented developer who fits in the back-of-the-front-end category.

The line between these two sides varies from developer to developer and you could be a mix of both. Having understanding of the division helps you better categorize yourself which should help shape your path as a developer and progress your set of unique skills.

My personal experience with XState

Introduction to My Golang Journey

Mika
I build complex things on the web and share my findings to help others learn too.
Meme Tuesday! 🤨
#discuss #watercooler #jokes
You're running an online conference but get called out for having an all-male speaker lineup 2 days prior. Yo, What do you do?
#discuss #serverless #aws
5 Small and Hidden React libraries You Should Already Be Using
#webdev #javascript #react #productivity

Once suspended, msyyn will not be able to comment or publish posts until their suspension is removed.

Once unsuspended, msyyn will be able to comment and publish posts again.

Once unpublished, all posts by msyyn will become hidden and only accessible to themselves.

If msyyn is not suspended, they can still re-publish their posts from their dashboard.

Once unpublished, this post will become invisible to the public and only accessible to Mika.

Thanks for keeping DEV Community 👩‍💻👨‍💻 safe. Here is what you can do to flag msyyn:

Unflagging msyyn will restore default visibility to their posts.