Originally published in Make Side Project.

Late October thru the end of November was a busy time for me, thanks Product Hunt (with help from Indie Hackers and others) for organizing a great hackathon. 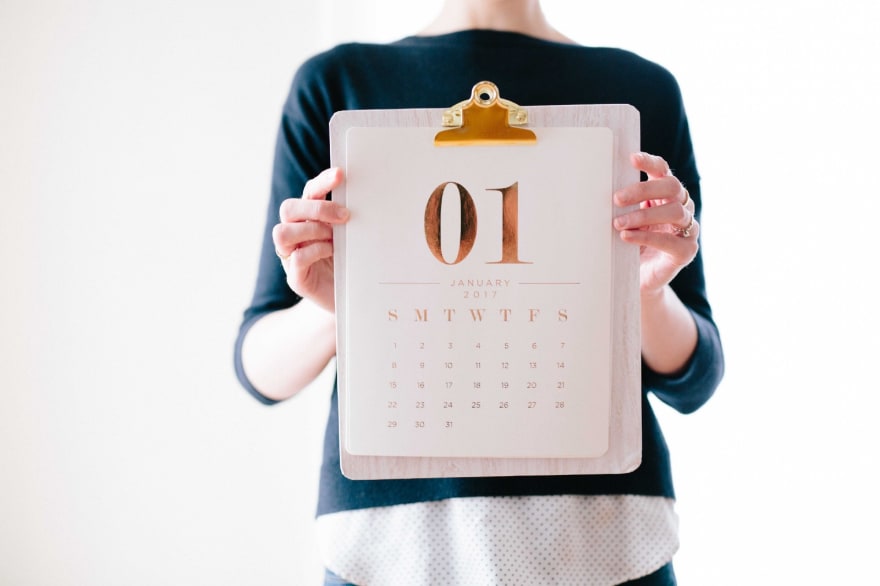 Before the hackathon started, I was thinking about if I would go it alone or find a team to be a part off.

As I read about the hackathon, and saw the tweets and posts from people saying they would be participating. It occurred to me that there wasn't a place that listed all the people who wanted to participate or those that might be looking for additional team members to join their project.

So I decided to build something. A pre-hackathon hackathon.

Since I wanted to build something for people to use to organization for the hackathon, which was starting in less than a week, I had to get something launched very quickly.

This would mean keeping things very simple, but still being a useful tool.

I launched Hackathon Match the next day after some late night hacking. I wrote about the process: Making something for a Hackathon

Naturally the site was posted on Product Hunt, where it did quite well. It currently has over 320 votes. 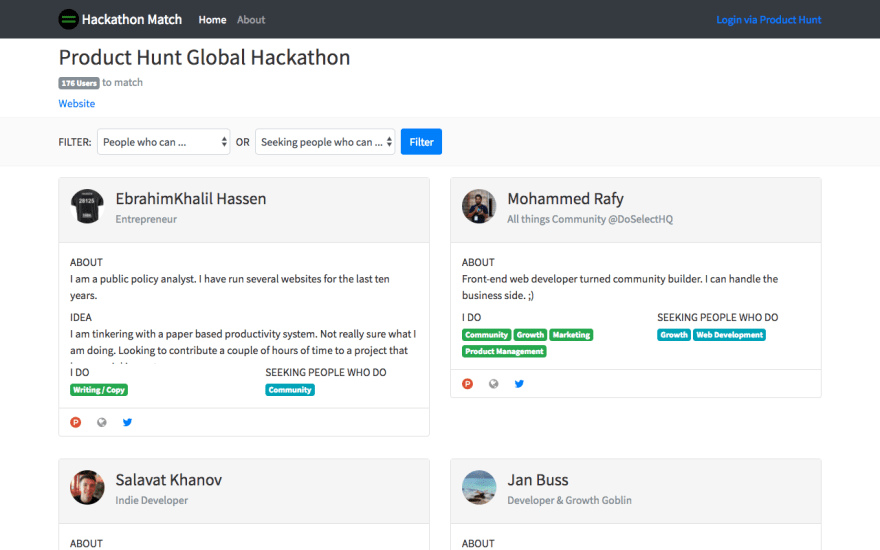 Over 200 people posted their profiles on the site, and I believe it lead to a few matches for people looking for partners in the hackathon.

Finally the start of the hackathon was here!

We noticed that it's a painful process sending cryptocurrency to other people, even the process of asking people their wallets so we know we're sending funds to the correct destination, so we decided to solve that part.

WalletList allows you to easily build and maintain a list of wallets you prefer to receive cryptocurrencies into. For the sake of security it generally recommended to not keep funds in these wallets and transfer them to a more secure private wallet.

Once you've built you're list, you can easily share your page with people and they know just where you'd like to receive Bitcoin, or other cryptocurrencies.

That morning Seth did a live stream as he designed our product, Wallet List. Unfortunately the stream is not available anymore, but it was cool to watch Seth design our product, and take live feedback from viewers.

I was working that for most of the days, but as the evening rolled around I jumped into the build and integrated what Seth had designed.

Seth and I treated the hackathon as a regular high octane hackathon, not the 30 day long one that Product Hunt has planned for us. We worked late into the night and had everything ready to go for the next day.

On day 2 of the hackathon Wallet List was ready to be launched. 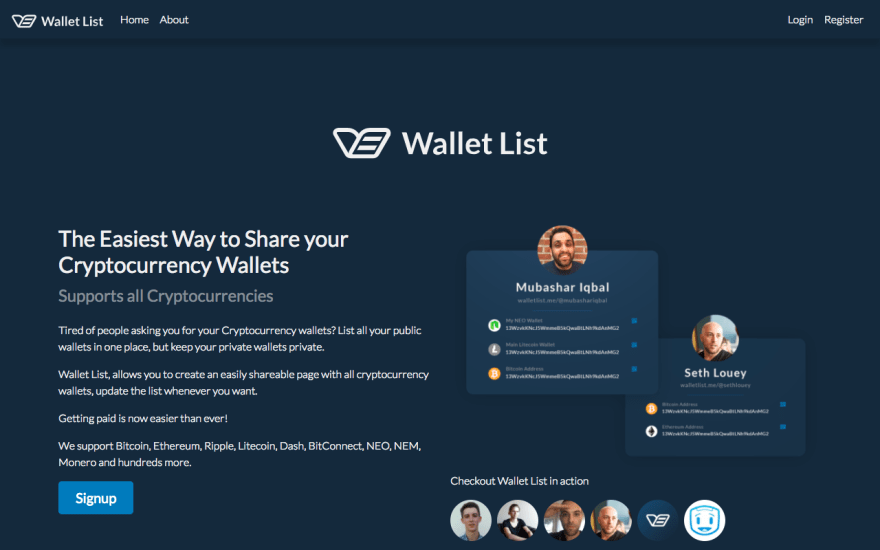 You can find out more: Or where should I send you that cryptocurrency?

Over 200 people have created wallets, I've personally used the website when someone asked me for my Bitcoin wallet address, and I hope many others have too.

I turned my attention to my other hackathon project. I had decided to build "one more" big project before the end of the year, and to document my process. I wasn't even sure what I was going to build, but I had some ideas. I shared those with readers on Medium and my followers on Twitter and asked them to help me decide what to build. 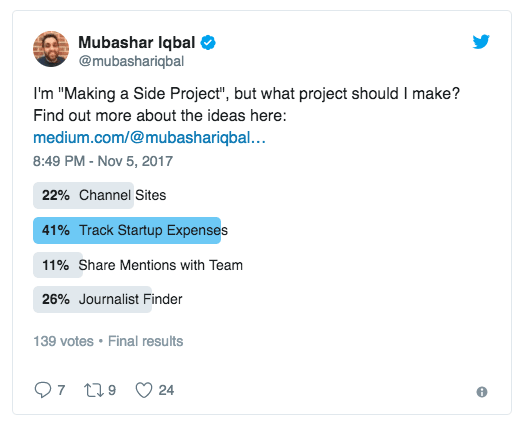 Over the next days I went thru the process of validating the idea of building an application that would help to track startup expenses, deciding the features, planning the website, designing the website and starting the build.

I created a Medium publication to keep all the posts easy to find.

Daniel Kempe had reached out a week or so earlier about the possibility of building something for the hackathon, but we hadn't decided what to work on. I had previously built Quuu with Daniel so I knew we just need to wait for inspiration to strike, and we could make something very cool.

Inspiration struck on day 20. We'd built Quuu largely in public, and I'd been building Deaton entirely in public. I knew a few other people like, Pieter Levels, Fred Rivett and Seth Louey were building their companies in public. We all shared our progress in different ways. Some tweeted, posted shots on Dribbble, or videos on YouTube, posts on Medium. It was difficult to keep up with what everyone was doing.

I wondered if we needed a dedicated site to help people publish, and for people to follow people as they built their companies in public. Since we were in the middle of a hackathon where other people were sharing their progress, it seemed liked a great time to test the idea.

I had a built a solid foundation for the features of what was now called Publicly, and in the spirit of building in the open, shared my plans in a post on Medium: Building in Public

I'd been working on both Deaton and Publicly the past few 10 days, but felt that Publicly was now ready to be officially launched.

Not only had we finished the design and development, we'd some how managed to convince 20 people to post their projects and start sharing their progress. 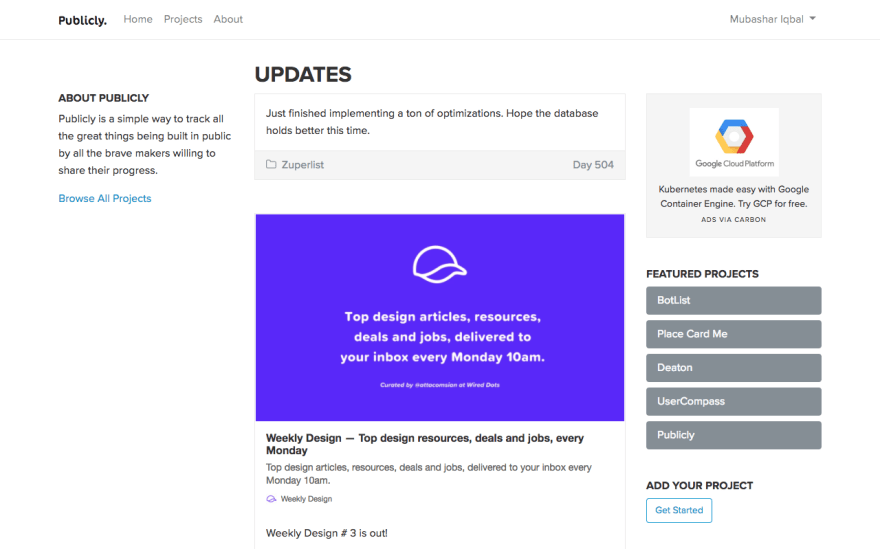 I wrote more about Publicly: Build in the Open

We launched to a great response on Product Hunt. We were the number 1 hunt of the day and got over 500 votes.

With just one day left in the hackathon I was able to get the last changes I wanted done on Deaton. 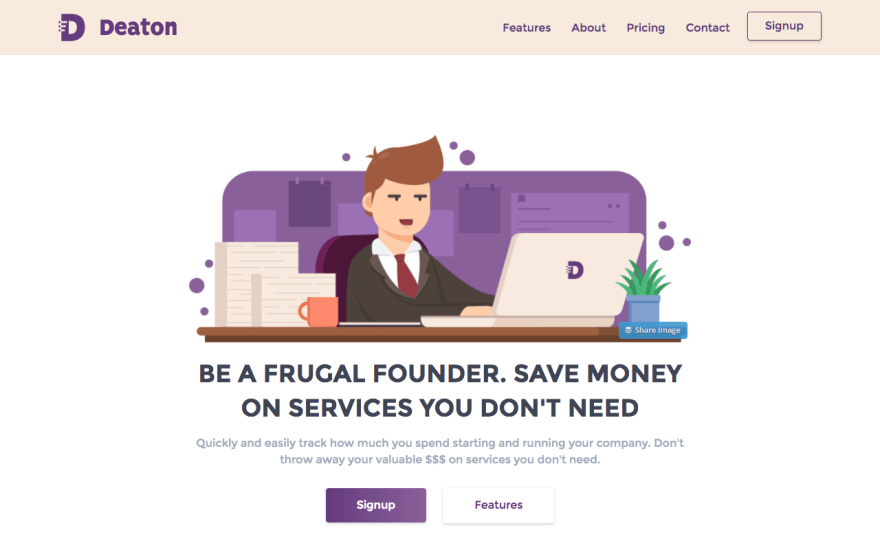 Deaton is a very easy way to track the expenses you incur when starting or running your company. It support one-time or recurring expenses.

I decided to delay the official launch of Deaton until after the announcement of the results, and now that we're close to the holidays, will probably wait until the New Year.

I now have 4 projects that I'm very excited about for 2018. Over the next couple of weeks I'll be making my plans for next year, deciding which (or perhaps all) I'll be focusing on.

I like have multiple projects simmering, if I don't feel like working on one particular project, I have the option to spend a little time on something else, but still feel like I'm being productive.

Finally I'll just mention, that the hackathon gave me the building bug. Since the end of the hackathon, I've built a collection of much smaller sites that require little or no maintenance. I'm very excited about the cryptocurrency space and so had a lot of fun building: How Much is a Bitcoin Worth - A site I built while watching a soccer match, this also lead me to build How much is a Ethereum Worth? and How many Bitcoins are there?

After that I decided it might be a good idea to compare the market cap of cryptocurrencies with other financial assets so Cap Compare was born.

Unofficially I make that 8 sites in 49 days, but who's counting?

Originally published in Make Side Project.

10 Tips to Hack Your Way Into Hackathons 👾

I made a podcast about regular expressions

Once suspended, mubashariqbal will not be able to comment or publish posts until their suspension is removed.

Once unsuspended, mubashariqbal will be able to comment and publish posts again.

Once unpublished, all posts by mubashariqbal will become hidden and only accessible to themselves.

If mubashariqbal is not suspended, they can still re-publish their posts from their dashboard.

Once unpublished, this post will become invisible to the public and only accessible to Mubashar Iqbal.

Thanks for keeping DEV Community 👩‍💻👨‍💻 safe. Here is what you can do to flag mubashariqbal:

Unflagging mubashariqbal will restore default visibility to their posts.