I admit it can be intimidating to want to learn web development and to attempt to do so. Due to the overload of information the internet provides, many people never even give it a try because of the information overload. If you're not sure where to start, you're in the right place.

In this article, I want to explain to you how to learn and understand web development.

Together, we will take one step at a time.

What is Web Development 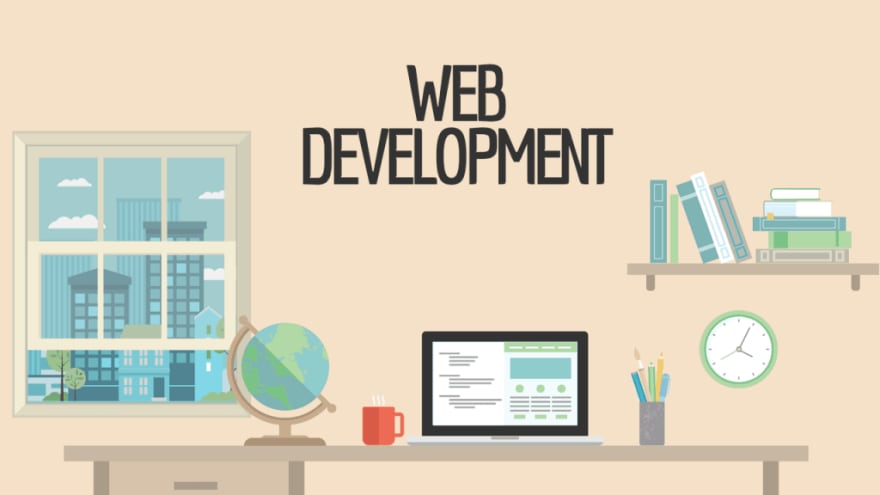 Web development is basically the creation of website pages — either a single page or many pages. There are several aspects to it, including web design, web publishing, web programming, and database management. It is the creation of an application that works over the internet i.e. websites.

The word Web Development is made up of two words, that is:

Web: It refers to websites, web pages, or anything that works over the internet.

Development: Building the application from scratch.

How do Websites Exactly Work?? 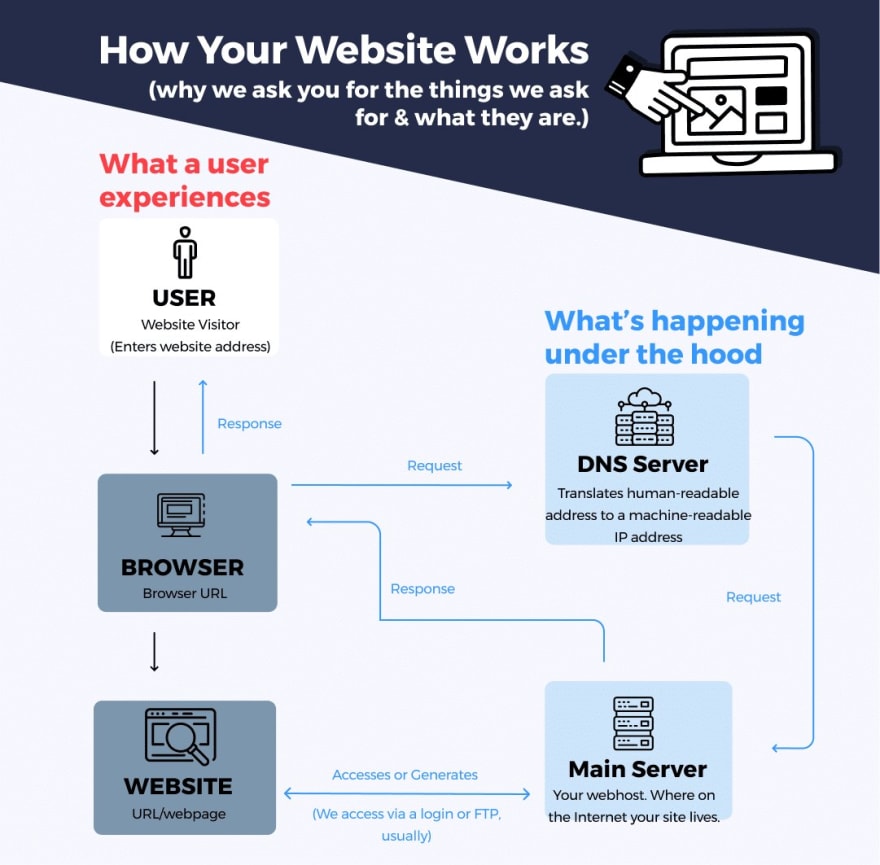 When you type a web address into your browser:

What is Front End And Back End

The front end of a website is the part that users interact directly with. It is also known as the 'client side' of the application. It includes everything that Users experience directly: text colors and styles, images, graphs and tables, buttons, colors, and navigation menu. Front-end development is done using HTML, CSS, and JavaScript. Whenever a website, web application, or mobile app is opened, front end developers implement the structure, design, behavior, and content on the browser screen. Among the main goals of the Front End are responsiveness and performance. There should be no part of the website that behaves abnormally irrespective of the screen size, the developer must ensure that the site is responsive, i.e. that it appears correctly on devices of all sizes.

The backend of a website is server-side. The server stores and organizes data, and ensures there is no problem on the client end of the web page. It is the part of the website that can not be seen or interacted with. It is the part of the software that does not have direct contact with users. Backend designers develop software components and characteristics that end users can access indirectly through a front-end application. Besides creating APIs, establishing libraries, and working with systems without user interfaces, the backend also includes scientific programming systems.

Start by Learning the Basics- HTML, CSS and JavaScript

Three basic components make every website. Those are: HTML, CSS, and JavaScript. 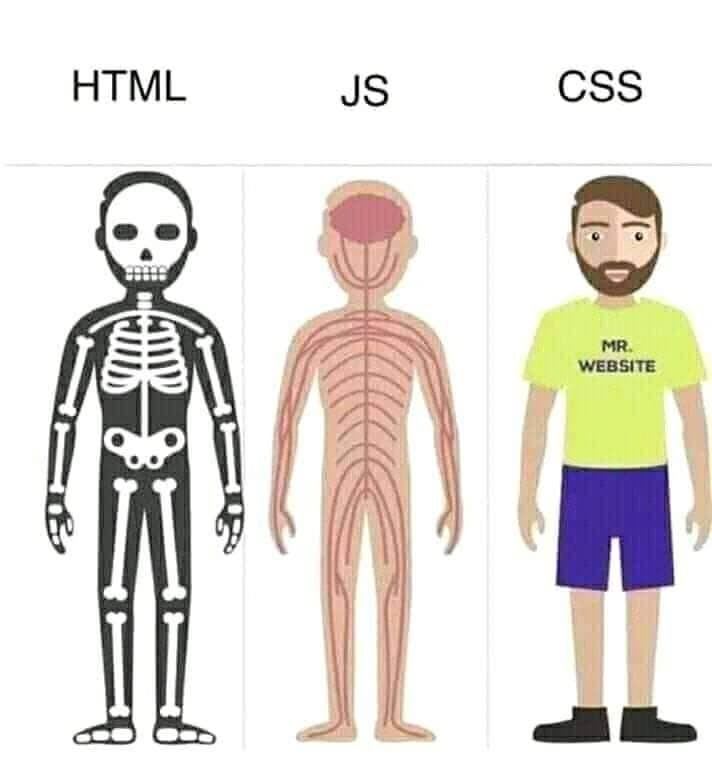 Hypertext Markup Language (HTML) is a computer language that makes up most web pages and online applications. A hypertext is a text that is used to reference other pieces of text, while a markup language is a series of markings that tells web servers the style and structure of a document.

HTML is not considered a programming language as it can’t create dynamic functionality. Instead, with HTML, web users can create and structure sections, paragraphs, and links using elements, tags, and attributes.

CSS stands for Cascading Style Sheets. It is a style sheet language that is used to describe the look and formatting of a document written in a markup language. It provides an additional feature to HTML. It is generally used with HTML to change the style of web pages and user interfaces. It can also be used with any kind of XML documents including plain XML, SVG, and XUL.

JavaScript is a scripting or programming language that allows you to implement complex features on web pages — every time a web page does more than just sit there and display static information for you to look at — displaying timely content updates, interactive maps, animated 2D/3D graphics, scrolling video jukeboxes, etc. — you can bet that JavaScript is probably involved. It is the third layer of the layer cake of standard web technologies, two of which (HTML and CSS) we have covered in much more detail in other parts of the Learning Area.

You will need a program called a code editor on your computer to work with the three types of files mentioned above.

The type of coder editor you need depends on the type of code you want to write. The different types of code editors available are

Visual Studio Code is an open-source code editor developed by Microsoft. This is probably the closest thing we have to an IDE of all the code editors in our list. The program is very robust - but it takes a while to launch. While using it, VS Code is not only quick, but it can also handle quite a few interesting tasks, such as quick Git commits or opening and sorting through multiple folders.

Sublime Text revolutionized the way code editors work. When you click the button, it doesn't take much time for your file to be ready for editing. The responsiveness of this code editor makes it the best in its class overall. Opening a file and making a quick edit may not seem like much of a hassle, but the delay can quickly become frustrating.

Github's owner, Microsoft, said it wants the cloud to be the centerpiece of its 2020s vision, and here's an example. Codespaces, a browser-based code editor based on Visual Studio Code, was released in May 2020. There is support for Git repositories, extensions, and a built-in command-line interface so you can edit, run, and debug  your applications from any device. It's obvious that this allows you to work from anywhere and makes collaboration with other developers easier.

Atom is an open-source code editor from GitHub. The editor was heavily influenced by Sublime Text in its initial development but has several major differences. Atom is free and open-source, and it integrates seamlessly with Git and GitHub out of the box. Atom has historically had performance and stability issues, but these have diminished as it has matured. While it does launch more slowly than some code editors, it's just as reliable and fast once it's running.

Frameworks to infinity and beyond

After you know everything, you must realize that to build a website, you will need to work with frameworks. 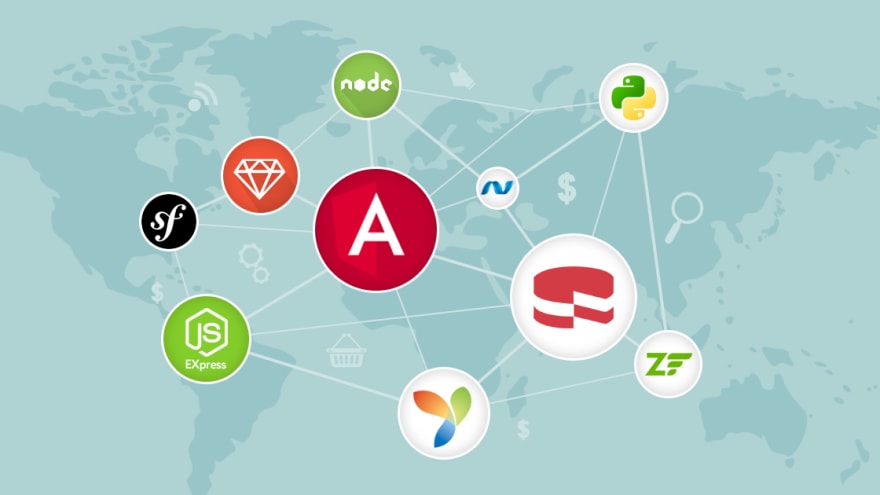 To use a framework, you will have to install it on your own website files. After that, you can then add commands on those structures to create the website according to your needs.

For Example: A CSS framework such as Bootstrap, for example, requires us to write CSS using slightly different rules than regular (vanilla) CSS. This will also limit the amount of customization we can do with CSSWhile Bootstrap has drawbacks, we often overlook them because we can create mobile-friendly pages faster and with less effort with it

So, that was all about the basics of web development.

Before you leave, there are some things you should keep in mind.

From my end, that's all I have to say.

Oh! Last but not least:

I wish you the best of luck!

You can now extend your support by buying me a Coffee.😊👇

Once suspended, muthuannamalai12 will not be able to comment or publish posts until their suspension is removed.

Once unsuspended, muthuannamalai12 will be able to comment and publish posts again.

Once unpublished, all posts by muthuannamalai12 will become hidden and only accessible to themselves.

If muthuannamalai12 is not suspended, they can still re-publish their posts from their dashboard.

Once unpublished, this post will become invisible to the public and only accessible to Muthu Annamalai Venkatachalam.

Thanks for keeping DEV Community 👩‍💻👨‍💻 safe. Here is what you can do to flag muthuannamalai12:

Unflagging muthuannamalai12 will restore default visibility to their posts.