This is the second post of the series on Linux terminals, tty, pty and shell.

In the first post we have talked about the difference between tty, pty and Shell and what happens when we press a key in a Terminal (like Xterm). If you haven't had the chance to read it yet, this is the link to the first part of the article. Without reading the first part, some of the things discussed here might be harder to understand.

In this article we will:

In the previous article we introduced the line discipline as an essential part of the terminal device.

But what is it?

From Wiki:
In the Linux terminal subsystem, the line discipline is a kernel module which serves as a protocol handler between the level device driver and the generic program interface routines (such as read(2), write(2) and ioctl(2)) offered to the programs.

This definition is a bit dry, fortunately it contains a few keywords we can use to dive deeper.

In a Unix-like system everything is a file, we all have heard this before. A program managing a pty will essentially perform read and write operations on a pair of files, pty master and pty slave.

A program writing data to disk, sending a document to the printer or getting data from an usb stick will use the same read and write operations, although the work required to perform the tasks depends on the type of the device and the characteristics of the device itself.
Our program is completely unaware of those details - the kernel provides a programming interface and takes care of all these differences for us.

What does it do?

The following is a (non comprehensive) list of the line discipline functionalities.

Historical note: XON/XOFF is a flow control feature that traces back to the time of hardware teletypes connected to the computer via a UART line. When one end of the data link could not receive any more data (because the buffer was full) it would send an "XOFF" signal to the sending end of the data link to pause until the "XON" signal was received.

Today, with computers featuring Giga bytes of RAM, "XOFF" is used just as a mean to suspend processes.

The Linux system is made of tons of abstractions which makes our life easier when we need to program. As with all the abstractions, they also make it hard to understand what's going on.

Fortunately, we have an ace in the hole: the power of trying out stuff. This is what we are going to next.

Managing the line discipline with stty

The stty is an utility to query and change the line discipline rules for the device connected to its standard input.

Run in a terminal stty -a

The output of the command returns the terminal characteristics and the line discipline rules.

The first line contains the baud rate, the number of rows and columns of the terminal.

Historical note: When the terminal and the computer where connected via a line, baud rate provided the symbol rate of the channel. The baud rate is meaningless for a pty. You can read more about it in its wiki page

The next line contains key bindings: For example the initr = ^C maps CTRL + C to kill -2 (SIGINT).
Scrolling through the end of the output we find the line discipline rules that do not require a key binding.
Do you see the echo ?

echo is the rule which instructs the line discipline to echo characters back.

You can imagine what happens if we disable it.
Open a terminal and run:

Then type something...nothing will appear on the screen.
The line discipline does not echo the characters back to the pty master, thus the terminal does not show what we type anymore!

Everything else works as usual. For example, type ls followed by enter. You will see the output of ls, although you haven't seen the characters ls when you typed them.

We can restore it by typing:

Why would someone want a raw terminal? No echo, line editing, suspend or killing, etc. It looks like a nightmare!
Well, it depends on what's the program receiving the input of the terminal. For example, programs like VIM set the terminal to raw because they need to process the characters themselves. Any external intervention that transforms or eats up characters would be a problem for an editor.

As we will see, our remote terminal would need a raw terminal as well.

Build a remote terminal in golang

A remote terminal program allows to access a terminal on a remote host.
Connecting through SSH to a remote machine does just that. What we want to do is similar to the result of running ssh, minus the encryption bits.

I think we know enough to start hacking on some code.
We would need a client-server application. The client runs on our machine and the server sits on some remote host.

The client and the server will communicate via tcp.

I have simplified the code to highlight the interesting bit for this article. You can find the code for the example and how to build it on git.

Let's start from the server.

The server performs the following operations:

Our server does exactly what the terminal emulator does, but in this case instead of drawing stuff to the screen, it performs the following:

Follows the code for the server:

And indeed, there isn't much more to it.

There is only a caveat, the client should send all the characters to the server. We do not want the line discipline on the client to interfere with the characters we type. Setting the terminal to raw mode does just that.

The client performs the following operations:

What happens when we run the program?

Now that we have the client and the server, we can see the whole workflow from client to server. 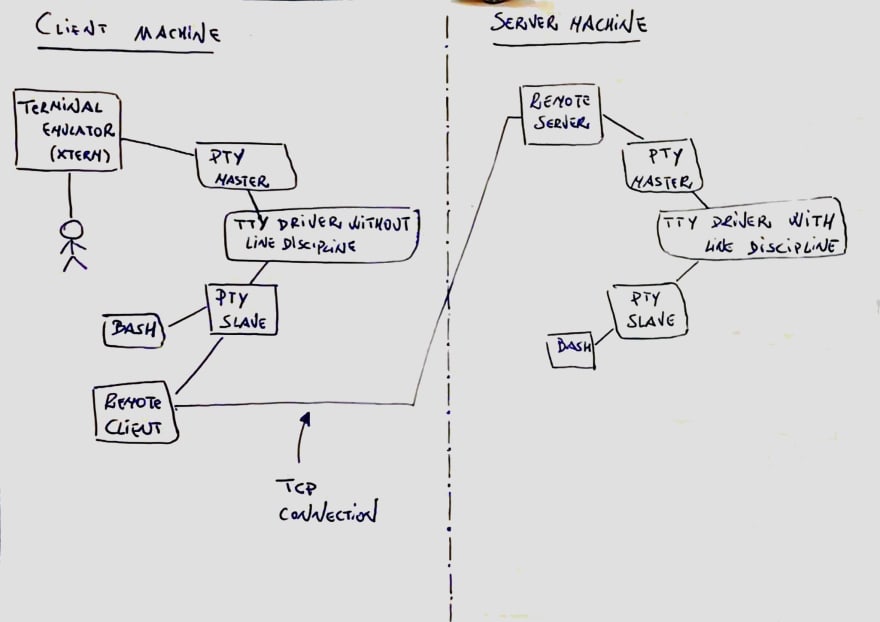 In the following we assume the golang program has been compiled in a binary called remote. We will also assume the program has already been started on the server machine.

All of this is just to display on the client the bash line ~ > coming from the bash process which runs on the remote server!
Now, what happens when the user types a command?

Look back at our little golang program and compare it with the number of steps in the workflow.
With a little over 50 lines of code we were able to implement the whole workflow. Our program is small thanks to the kernel, which performs the heavy lifting.

That's the power of abstraction

We have reached the end of the series. The research work to write it was a lot fun and I hope it was also an interesting read.

* I know, it looks more like the game of hangman than a system diagram

Software dev engineer at AWS. Java, js and container enthusiast. Love automation in general. Opinions are my own.

Anyone can help in tailwind?