Create React App is the first choice of most, if not all, React developers. It creates a React project for us and only requires a few commands. Its simplicity and quick nature make it a favorite among beginners as well. But, there are also ways to create a React app without it.

By the end of this article, you will have your very own React app without using create-react-app.

Since this React app will use the Webpack module bundler, we need to install quite a few dependencies. These dependencies are required by Webpack so it can detect and work with the various file types.

Here's what we need to install:

These two packages are the dependencies we need for our simple app. If your project needs any other packages, you may install those.

There are close to 10 devDependencies, so let's install them in groups and I'll explain what each dependency is for. First comes webpack:

The remaining devDependencies are for CSS and HTML:

Everything a basic React project needs is installed. Now create these folders and file in the project's root:

At this point, your project folder should look something like this:

Let's add the presets in the Babel config file:

It is recommended to have two separate config files for Webpack - one for development and one for production. Although both files will have the same configuration for loaders and any plugins, there are slight differences. This is what a config file for development looks like: 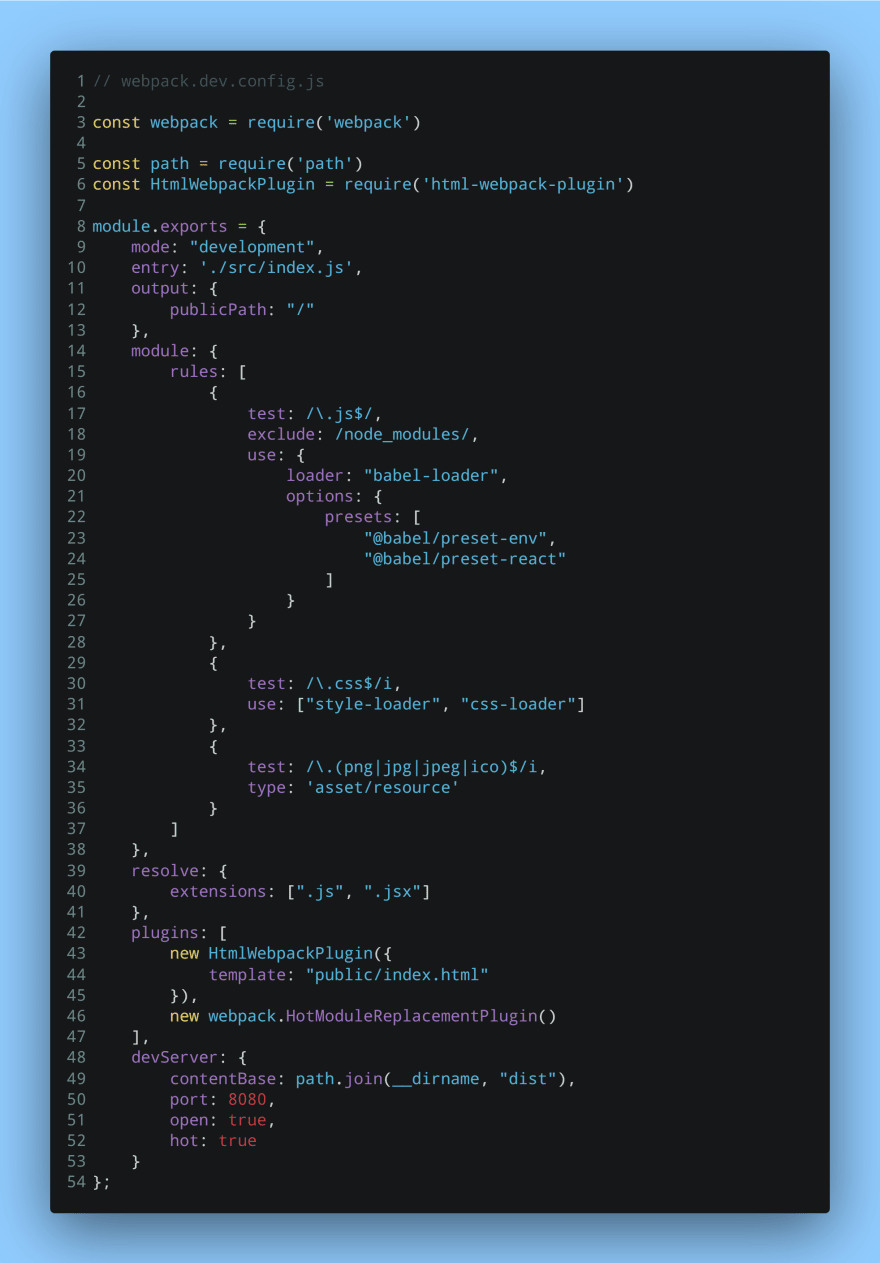 Here, we first declare the mode configuration option. With this, Webpack can use its built-in optimizations accordingly. Next, module.rules is an array containing 3 objects:

Note: According to the Webpack docs, style-loader and css-loader need to be used in the exact same order as in this config file or it won't work.

After loaders, we have two plugins. When Webpack bundles all JavaScript, CSS, and other necessary files, it also creates an HTML file. This is where we use the html-webpack-plugin. This plugin tells Webpack to use our HTML file as a template and inject the compiled bundles into it.

So, instead of creating its own HTML file, Webpack instead uses our HTML file - public/index.html and adds the bundled files to it via <script> tags.

The other plugin we use is HotModuleReplacementPlugin which comes with the webpack package and is used for hot reloading our app in development mode.

Now let's take a look at the production version of the configuration file: 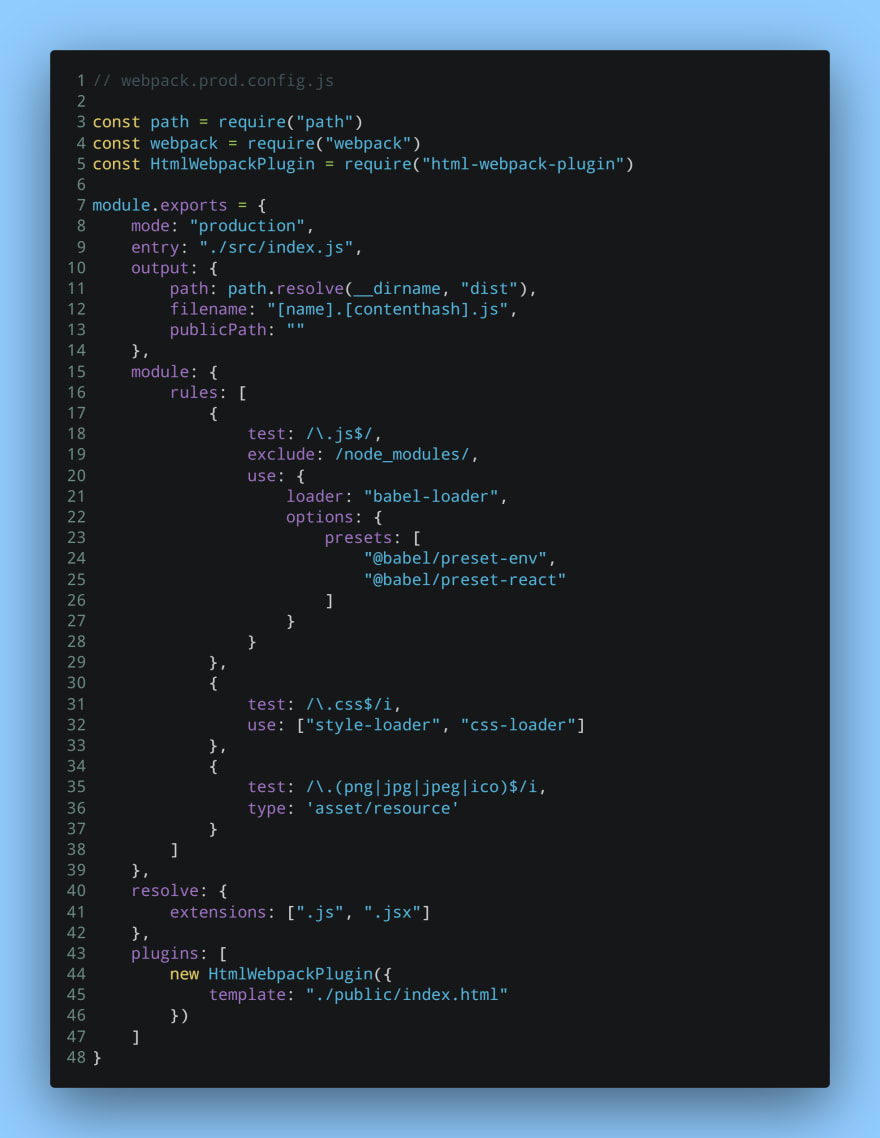 Not much has changed except that we no longer need HotModuleReplacementPlugin and devServer since they will not be used in production. The mode option has also been set accordingly. You might have noticed the changes in output.

output.filename has a value that we haven't seen before. The values in square brackets are tokens. The [name] token allows Webpack to name files differently if we use code-splitting. [contenthash] is used so that the bundle file name changes when its content changes.

Our app is almost ready. I have a simple App.js component: 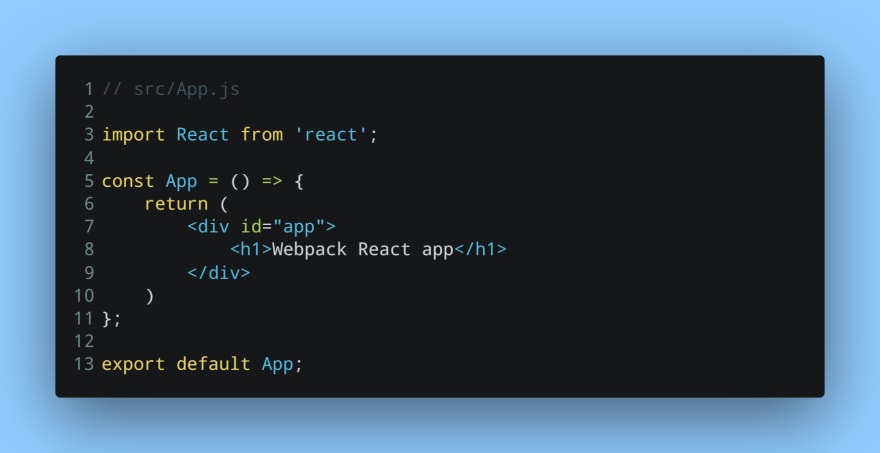 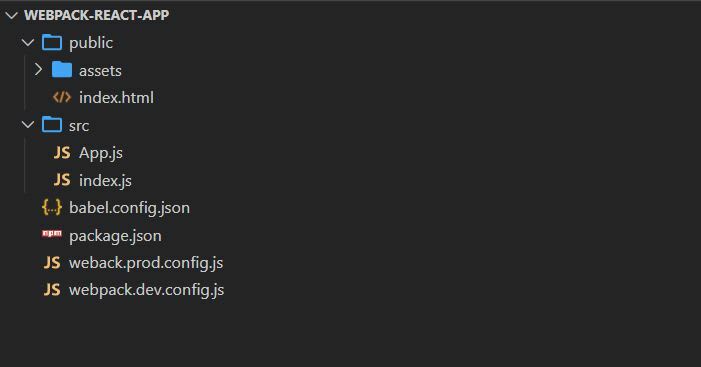 Finally, we need to add scripts to run our app:

With the serve option Webpack uses webpack-dev-server to create a web server. Let's run our app.

Open https://localhost:8080 in your browser and your app should be running.

This is a basic React app where we manually configure Webpack. I hope this helped you to understand a bit about the various plugins and loaders Webpack requires and what its configuration files look like. The Webpack documentation is worth reading. It was the major resource I used for this article.

In comparison, Parcel uses very few dependencies. I wrote another article about creating a React app with Parcel. That said, both have their own pros and cons.

Here are links to some additional resources:

Once suspended, napoleon039 will not be able to comment or publish posts until their suspension is removed.

Once unsuspended, napoleon039 will be able to comment and publish posts again.

Once unpublished, all posts by napoleon039 will become hidden and only accessible to themselves.

If napoleon039 is not suspended, they can still re-publish their posts from their dashboard.