The previous posts of this series were dedicated to frameworks that adopted the same traditional Object-Oriented-Programming approach. Components were modeled as classes. This week's post is dedicated to Jet Compose for Desktop, the new kid on the block that offers a completely different approach.

Getting your feet wet

Originally, Jetpack Compose is a framework for the Android runtime. Compose for Desktop is its port to the JVM.

Traditional GUI development follows OOP principles: a single graphical component encapsulates state and provides behavior to change it. This is how AWT, Swing, JavaFX, and even SWT work.

The idea behind Compose is to move away from OOP to Functional Programming principles instead. A component is modeled by a function and state is passed as its parameters. The function is called when the state changed.

Here's a Compose snippet displaying a value in a text field:

The source code does indeed dispel any potential misunderstanding:

To remove the state from the component is known as state hoisting.

Most applications do not stop at displaying state but offer a way to update it. The classical example in GUI applications is to have a label that mirrors a text field value.

Here's how it's done in Compose:

This deserves some explanation:

The Compose framework is designed around the concept of State. It provides several functions to instances of such classes.

In itself, the state isn't interesting, just as mirroring the value of a text field. Let's imagine a simple calculator use-case but restrict it to the summing of the integer value of two fields instead.

We need a state object to hold the sum.
Compose offers the concept of derived state:

Your own Compose component

Creating your own Compose component is as easy as implementing a function and annotating it with @Composable.

Composable can be applied to a function or lambda to indicate that the function/lambda can be used as part of a composition to describe a transformation from application data into a tree or hierarchy.

The "calculator" snippet above can be rewritten like this:

Annotating a component with @Composable has an important consequence: it changes the signature of the function in the bytecode. In this, it's similar to coroutines.

Note the additional Composer parameter. This is where the magic of Compose lies.

While the compiler itself handles coroutines, Compose needs a dedicated compiler plugin to achieve the same result.

So far, we have focused the post on how to develop with Compose. We avoided how Compose works. Still, I believe that developing with Compose is so different from working with other frameworks that it deserves a section.

Remember that every Compose component is just a function. Such functions are stateless and one injects state from outside by passing parameters. When the state changes, Compose detects it and triggers the repaint of the application. Functions are invoked again, including the top Window() one.

Compose achieves it via the added Composer parameter in @Composable functions. In the end, the Window function sets up this mechanism.

Interestingly enough, Compose for Desktop relies on a GUI class that inherits from... Swing's JFrame! This is summarized in the following class diagram: 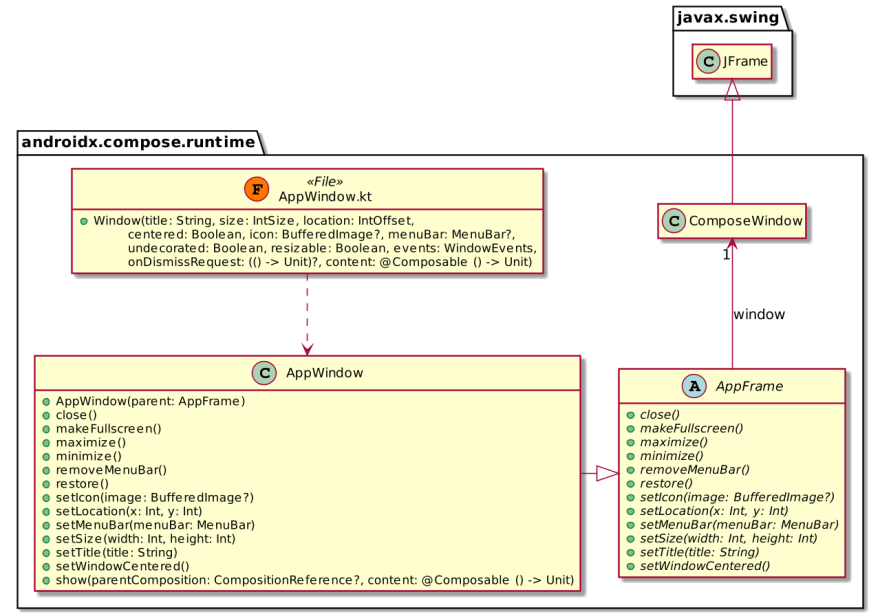 Now is the time to write about the remember function. We know that Compose invokes functions for each state change. The state is stored in variables inside those functions. Thus, when Compose invokes a function, the state is lost and is reset to its initial value.

Run any of the above snippets without the remember() function: they don't do anything because the state is lost after each change.

To keep track of state across recompositions, you need to wrap it inside a remember block. This tells Compose to cache the state's value and to set it again after functions have been invoked - to remember it.

The first remember() function will only run calculation during the initial composition. Further recompositions will yield the cached value.

Overloaded functions allow passing one or more parameters. If parameters have changed since the previous composition, Compose will invoke the calculation function and set the state to its return value. Otherwise, it will behave as above - cache the value.

This is the final result: 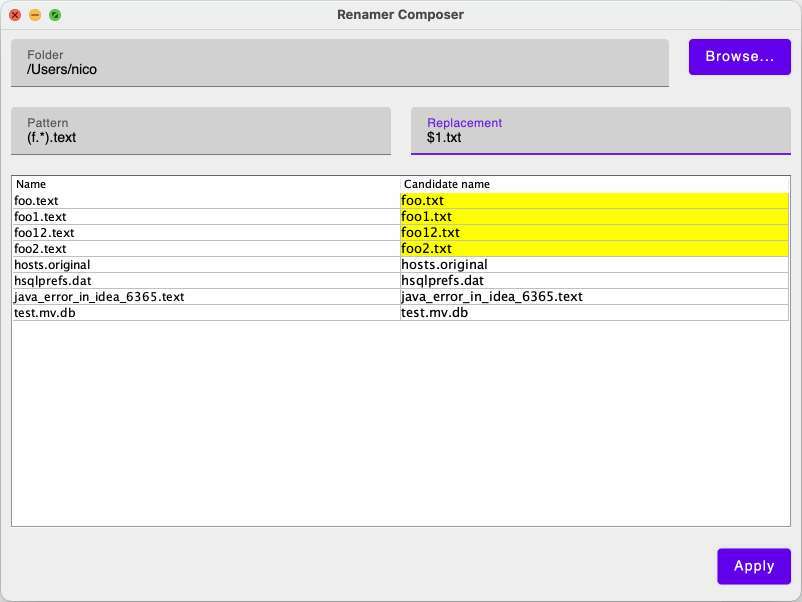 Jetpack Compose for Desktop seems to be an interesting initiative. The framework is in its early stage. But the functional approach is original compared to all other Java desktop frameworks.

The complete source code for this post can be found on GitHub:

Originally published at A Java Geek on February 7th 2021

Thanks for keeping DEV Community safe. Here is what you can do to flag nfrankel: