It's funny how things come in sequences. Recently, on three separate occasions, I stumbled upon questions asking what people used for front-end technologies. Every time, my answer was Vaadin. Unfortunately, some places, e.g. Twitter, are too limiting to explain my answer in depth.
In this blog, I've no such limitations.

In one sentence, Vaadin is a framework to create GUI using plain Java, or any JVM-based language for that matter. One develop in Java, and the framework takes care of all the rest: this includes the generation of the client-side code, and the communication between the client-side code in the browser and the backend code on the server.

This architecture provides the following benefits.

The first and foremost characteristic of Vaadin is that there's no need to know other technologies. Let's think what skills are required for a "standard" app that consists of a REST API and a JavaScript front-end:

That's no less than 8 completely unrelated technologies. And I'm particularly generous: I'll leave out any additional JavaScript libraries, as well as the build tool necessary to build the front-end artifact. Yet, the latter is required in order to transpile from TypeScript to JavaScript, or from the latest JS version to one that is supported by most browsers. With Vaadin, the list becomes limited to Java... and Vaadin.

If you read this, you might consider that it's not that a huge benefit, because you are surrounded by 10 times developers, whatever that means). My experience is quite different: I've worked more than 15 years as a contractor, for a lot of different customers. Most developers are regular people, happy to work from 9 to 5, and then go back home to live their lives. They have neither the will nor the time to learn yet-another-technology outside of office hours. With the premise that training needs to take place during office time, less technologies mean less training time, and more time dedicated to developing the app.

The simplicity that Vaadin provides has an additional benefit. If one app's architecture is separated into a front-end and a back-end that communicate via a REST API, there are two strategies to organize one's team:

Parallelization between backend and front-end development

By default, Vaadin lets developers who don't double as graphic designers to develop acceptable-looking GUIs. However, it happens that the product owner has requirements - and sometimes even budget - to customize the design.

With the traditional approach, designers achieve that with HTML and CSS. They will design specific HTML templates and CSS classes. Then, developers will be asked to use them.

If requirements change mid-way, developers will need to stop their work to integrate the changes required by designers: there's a high dependency between the workflow of developers and the one of designers. Some technologies such as JSP, JSF and Thymeleaf allow designers' artifacts to be reused as-is by developers. In that case, both will need to work on the same artifacts. Git merge conflicts are always fun when one doesn't completely grasp upstream changes.

Vaadin introduces two abstractions that decouple the work of developers and designers: themes and components.

Finally, Vaadin is designed at its core to develop business applications.

Arguments I heard against using Vaadin

In all those years, I've heard quite a few arguments against using Vaadin.
They mostly all boil down to the following two.

"But does it scale?"

You might be interested in knowing that this question is part of the 10 tricks to appear smart in meetings (#6). 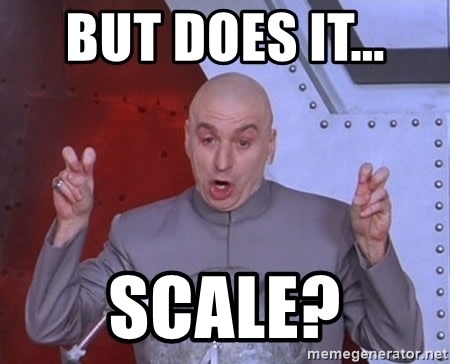 On a more serious tone, scaling definitely deserves some digging in. Vaadin stores the state of components server-side. With a huge number of components, and with the increase of the number of clients, this leads to an exponential consumption of memory. In that regard, traditional applications don't differ that much from Vaadin applications.

First, we need to understand that there's the vast majority of applications are stateful. However, the differentiating factor between them lies in where the state is stored. As I mentioned, Vaadin stores it on the server. There are only two other alternatives:

While beyond ten thousands of concurrent users, I might start thinking about other alternatives than Vaadin, anything below that number is fair game. That's 99.99% of all applications.

Another argument I've heard against Vaadin is that it's not API-first. Good software developers/architects alway develop an API in order to let different kind of clients to use: browsers, but also native clients, and other services - whether internal or third-party.

Unfortunately, I think this is herd mentality. API-first is desirable in the context of multiple clients. Most business applications I've worked on are just CRUD applications with more or less business logic applied on top.

But what if additional clients become necessary in the future? YAGNI! If you do, remember that Twitter was able to rewrite its complete information system from Ruby on Rails to Java: migrating the GUI layer of an application is well within the bounds of the possible.

Finally, while I never heard anything like that, I believe one of the reasons Vaadin is not that popular nor widespread is because it's so boring. It has been around since more than 15 years, it works as expected, and most challenges around it have already been solved. Unfortunately, this doesn't fit developers who practice Résumé-/Hype-/Ego-Driven Development.

I discovered Vaadin a bit more than 10 years ago, and that was love at first sight. In fact, I immediately began to tinker with it, and tried to integrate it with another of my crush, the Spring framework.

Version 10 saw a massive rewrite of the framework. Product management steered it toward more web-y features, such as web components, the introduction of routes, etc. I believe this move was done in order to appeal more to web developers. To be fair, I'm not very happy with those changes.

However, that doesn't change the fact I'm still a huge fan of the framework. I admit it's not as hype as JavaScript frameworks. On the other side, it's a massive productivity boost when developing business applications compared to any other hype alternative.

Originally published at A Java Geek on June 7th, 2020.

Top Programming Languages to Use in 2020

Learn To Code By Playing These Games