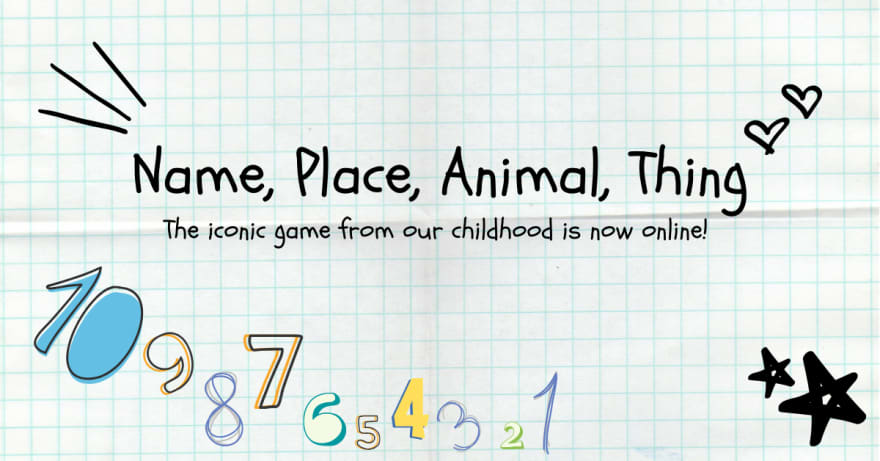 There are two things I’ve done quite a bit in this time of social isolation — catch up with old friends and play a ridiculous amount of Skribbl.io and Ludo King with said old friends.

During one of these late night catch-ups, someone suggested that we play “Name, Place, Animal, Thing” — a multiplayer game we used to play in our middle school notebooks. For those unfamiliar with the rules, here’s a watered down version — the game lasts over multiple rounds, and at the beginning of each round, you get an alphabet. You then have 60 seconds to think of a “Name”, a “Place”, an “Animal” and a “Thing” — and note down words for each of those categories, but only words that begin with that letter. The person who gets the most correct answers over the course of the game wins. Easy enough!

But what does making a game even entail?

The first thing I needed to do was define gameplay and outline a set of bare minimum requirements for the game to be playable. Let’s break it down.

Now, I am most definitely not a designer, but I wanted the game UI to have a notebook-y feel. I also am not a fan of (but mostly don’t know how to design) big and complex UIs. Let’s take the minimalistic approach (can you sense a pattern?):

I am primarily a front-end engineer (with some back-end exposure), but this mini project would require a server that would enable players (we’re going to call each player a ‘socket’) to real-time communicate with each other. I was aware of the WebSockets protocol as a bi-directional communication solution, but had never implemented my own. I decided to go with Socket.io, a library that uses the WebSockets protocol to enable communication between the browser and the server, and also adds some additional features (like fallbacks, automatic reconnects and broadcasting to multiple “sockets”).
JavaScript always has been my language of choice and I didn’t want to make the learning curve steeper than it already was. The back-end would be a Node.js server using socket.io.
The internet has a plethora of resources written by competent backend engineers, so I will not go into the details of Node.js, WebSockets and Socket.io.

I used create-react-app to bootstrap the project, but once I was done with the basic functionality, moved it over to Next.js because of the supposed improved SEO performance (my game did start indexing higher on google after this, but this was not a controlled experiment so I can’t really say).

I’ve also become a big fan of styled components, and having my CSS scoped to single components has really improved the developer experience for me. I don’t think I will be going back to the world of chaotic stylesheets anytime soon.
A couple of weeks in, and I managed to actually produce a playable v1 which I have been testing with friends and co-workers. Testing with actual people instead of repeatedly playing the game against myself has been a very insightful experience — I could write an entire post on that in itself — and I’ve got some really thoughtful, constructive and actionable feedback that I would like to take into future versions of the game, but for now, the first version is online and playable here.

Thoughts and feedback are always welcome and appreciated. Happy playing!

4 Ways to Minimize Your Dependencies in Node.js

Once suspended, niharikak101 will not be able to comment or publish posts until their suspension is removed.

Once unsuspended, niharikak101 will be able to comment and publish posts again.

Once unpublished, all posts by niharikak101 will become hidden and only accessible to themselves.

If niharikak101 is not suspended, they can still re-publish their posts from their dashboard.

Once unpublished, this post will become invisible to the public and only accessible to Niharika Khanna.

Thanks for keeping DEV Community 👩‍💻👨‍💻 safe. Here is what you can do to flag niharikak101:

Unflagging niharikak101 will restore default visibility to their posts.