Back to learning. I will not list some processes here like installing IDE, compiler etc. but provide useful links, as Internet has already better resources in this topic I can ever produce.

Most of us who are not from CS background find the idea of compiler very hard. The main reason is, we start with a programming language like Python or R that doesn't require learning this concept. These languages make writing and executing code very easy. For Python, steps are:

You can press enter the given code, and print a line of your choice. In this case, I choose, "I can actually code!". However, C is a bit more complex. C requires a piece of software called Compiler.

What really is a compiler?

For people like me, compiler can be best explained as the word Translator (Not using the word interpreter, as it has different meaning in programming language).

Suppose, John is visiting Germany for business purposes. He knows only English, but his meeting is with Mr. Lange who only knows German. They can't really communicate with each other. Luckily, Mr. Lange has a son called Richard who understands English and translate it to German so that Mr. Lange can understand.

Why is this needed?

Because C is a high level language. We can write code in words that is understood by us, but not by machines.

Given code is how you can print a statement in C (Don't worry about it now, it will make sense later). But, we kind of understand what is written, a computer on the other hand doesn't.

Digital computer only understands two digits; 0 and 1. The job of a compiler is to convert the code we write into 0s and 1s that the computer understands. You can see an example of machine code on Wikipedia.

Why C requires a compiler and Python doesn't?

Because the core design is different in these two languages. In case of, Python, it takes your code, translates it to machine and execute the machine code, then shows the result. This takes more computing power and time to do it compared to C. The way C works makes it very fast and eligible to write code that needs every bit of computing power like an Operating System.
Windows, macOS, Linux all has major portion of code written in C.

What are the available compilers for C?

GCC and Clang are two of the most popular compilers available today. You can learn more about these online. For our purposes, we will head straight to the coding environment.

IDE is an application software where developer can efficiently write and debug(finding problem) codes. As we are a beginner here, we are not going to use hardcore IDE like, Code::Blocks rather a code editor called Visual Studio Code. Here is how you can set up the coding environment like my PC:

You will get a similar looking IDE like me.

P.S. I didn't get accepted in Hogwarts doesn't mean that I can't do magic wizardry in a folder called Hogwarts. 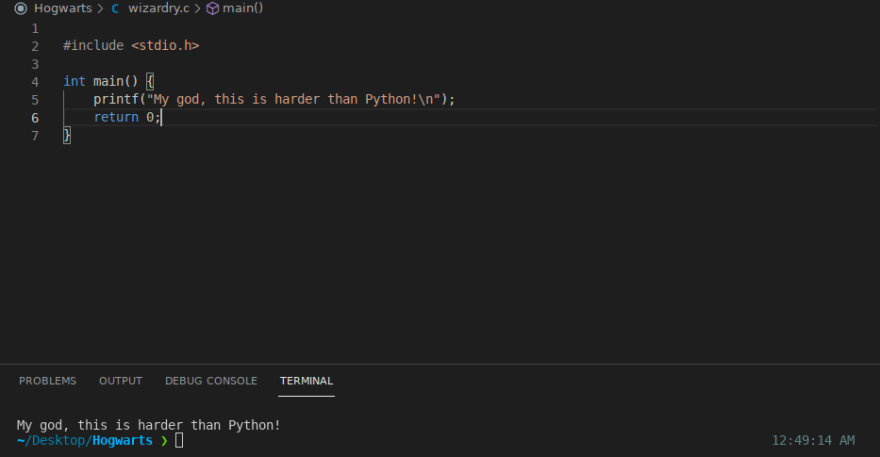 Both Google and YouTube is your only friend in this journey. Learn to use them well. I am going to provide as many resources as I can, but your issue will be unique and self-learning will not be possible without tremendous reading. Get ready for that.

Once suspended, nowshed will not be able to comment or publish posts until their suspension is removed.

Once unsuspended, nowshed will be able to comment and publish posts again.

Once unpublished, all posts by nowshed will become hidden and only accessible to themselves.

If nowshed is not suspended, they can still re-publish their posts from their dashboard.

Once unpublished, this post will become invisible to the public and only accessible to Nowshed H. Imran.

Thanks for keeping DEV Community 👩‍💻👨‍💻 safe. Here is what you can do to flag nowshed:

Unflagging nowshed will restore default visibility to their posts.