It has been a while since our last release blog post which was on Nx 13.5. A lot has happened since then. So here we go!

We keep optimizing the Nx core. This round we started doing some housekeeping and cleanup that will allow us to move more quickly in the future and add new features more easily. In particular we now have a single package nx that contains all the core and CLI related functionality that have previously been in @nrwl/cli and @nrwl/tao. This also results in a reduce number of packages you need to install in any Nx workspace. In fact, if you run add-nx-to-monorepo - our easy migration command for migrating Lerna to Nx or adding Nx to Yarn/NPM workspaces - you should now see a single nx package and not have any @nrwl/* packages at all.

Nx Daemon on by default

One of the core features of Nx is the calculation of the project graph. It is the basis for most other features in Nx like the affected commands, computation caching and calculation and topological sorting of parallelizing tasks during DTE. This is a I/O heavy operation. Whenever you change a file, the project graph needs to be re-calculated which involves reading the source files, analyze imports from other packages’ source files and external libraries.

Such a crucial and central feature like the project graph need to be as fast as possible. That’s the reason why we introduced the Nx Daemon, which is started automatically and runs in the background, watching for file changes and asynchronously recomputes and caches the project graph. As a result, whenever Nx runs an operation that requires the project graph, it is already there and ready to be used, without adding any additional delay to the operation that needs to be executed.

Read more on the docs: https://nx.dev/guides/nx-daemon

When you set up a new Nx workspace with create-nx-workspace the question about opting into Nx Cloud will be pointed on “Yes” by default now. 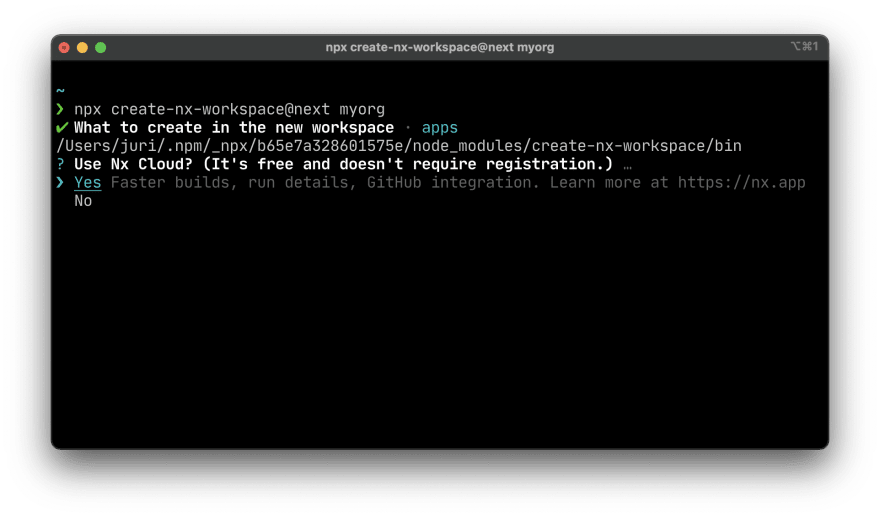 We recently changed Nx Cloud to give 500 free hours saved per month. Based on our data this makes Nx Cloud basically free for most workspaces and thus a no-brainer to opt-in. Read more in the announcement blog post.

Build and run Nx Plugins locally in your Nx workspace

Nx can be used in a wide range of scenarios, from small open source projects, startup environments to massive enterprise monorepos. This is thanks to its modular plugin based architecture consisting of

This illustration should give you a rough idea. obviously some of the plugins may be built on top of others, leveraging common functionality. An example is the the @nrwl/js plugin which not only can be used as a standalone plugin but also builds the basis for of many others by providing core JavaScript/TypeScript features. 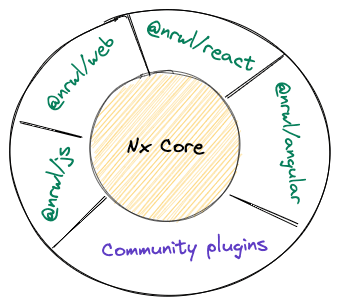 You can just use the Nx core without any plugins to get started and later decide to add more plugins such as @nrwl/react or @nrwl/js etc depending on your specific use case.

As you can see, plugins are at the very core and for quite some time now we’ve had a fully featured Devkit and Nx Plugin package to create your own. And the community followed: have a look at all the community Nx plugins that are available out there.

And we keep improving. Starting with Nx 13.10 you can now use Nx plugins to automate your local workspace. Install @nrwl/nx-plugin into your Nx workspace and generate a new plugin:

This creates a new library with a pre-configured setup to develop a Nx plugin. Similarly to other libraries you can now use those in your local Nx target configurations.

Note the executor definition of the mybuild target. It was never easier to create custom workspace executors.

And it doesn’t stop at the executors level. The local plugin setup comes with a generator setup too, which can be invoked just like

where @myorg is your Nx workspace name you defined and workspace-extensions the plugin library name we’ve chosen. You are free to choose whatever suits you best. This new setup opens up a wide range of new possibilities including defining default workspace generators.

We keep improving our project graph and make it more and more useful for visually exploring your Nx workspace. You can now click on an edge and list the files that cause it which can be extremely valuable during debugging. 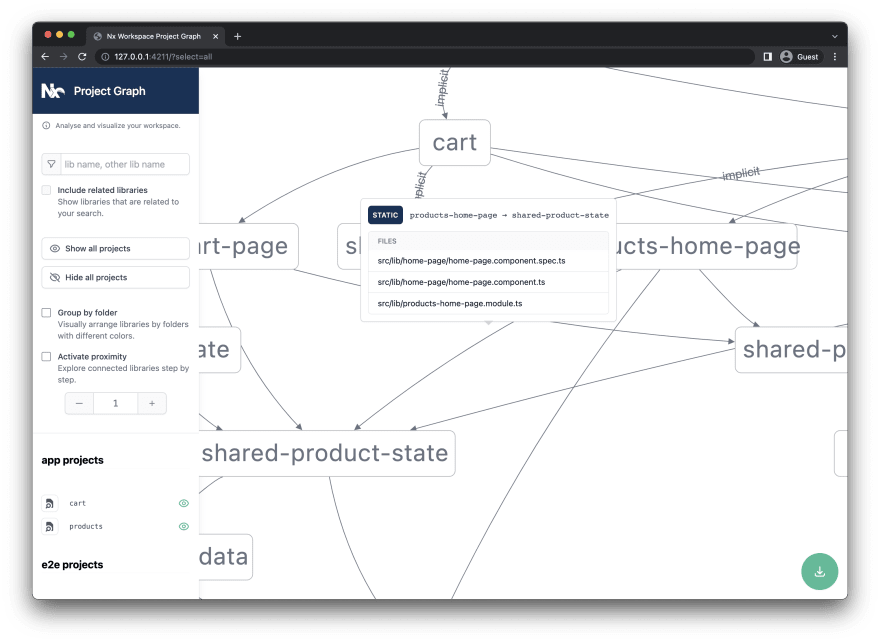 And this is just a sneak peak of what’s coming in Nx v14, so stay tuned!

Having a decent monorepo setup is not always just about speed but also to have features in place that help you keep your code-base healthy and maintainable in the long run. The Nx module boundary lint rules are an example for that. 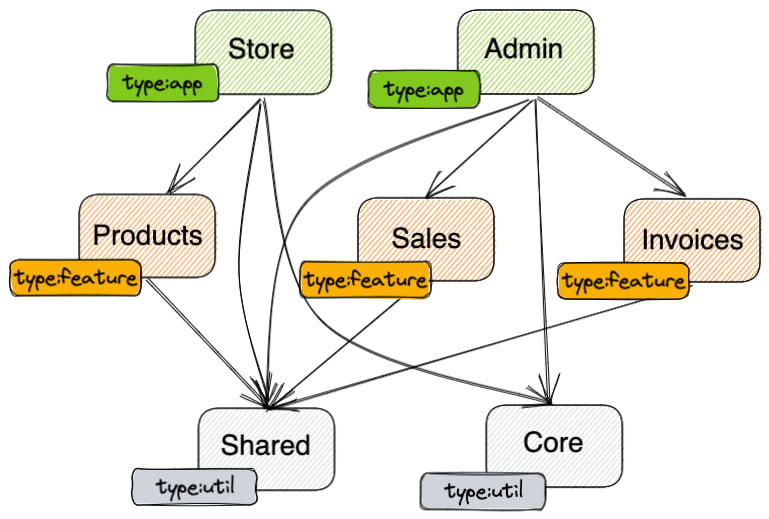 By assigning tags to your projects you can then configure which relationships among libraries and applications are allowed, and which are forbidden.

Read more about it in this article: https://blog.nrwl.io/mastering-the-project-boundaries-in-nx-f095852f5bf4

So far you have only been able to specify which tags a library is allowed to depend on using the onlyDepndOnLibsWithTags property. This made it cumbersome to define in some situations. Now you have a brand new property notDependOnLibsWithTags 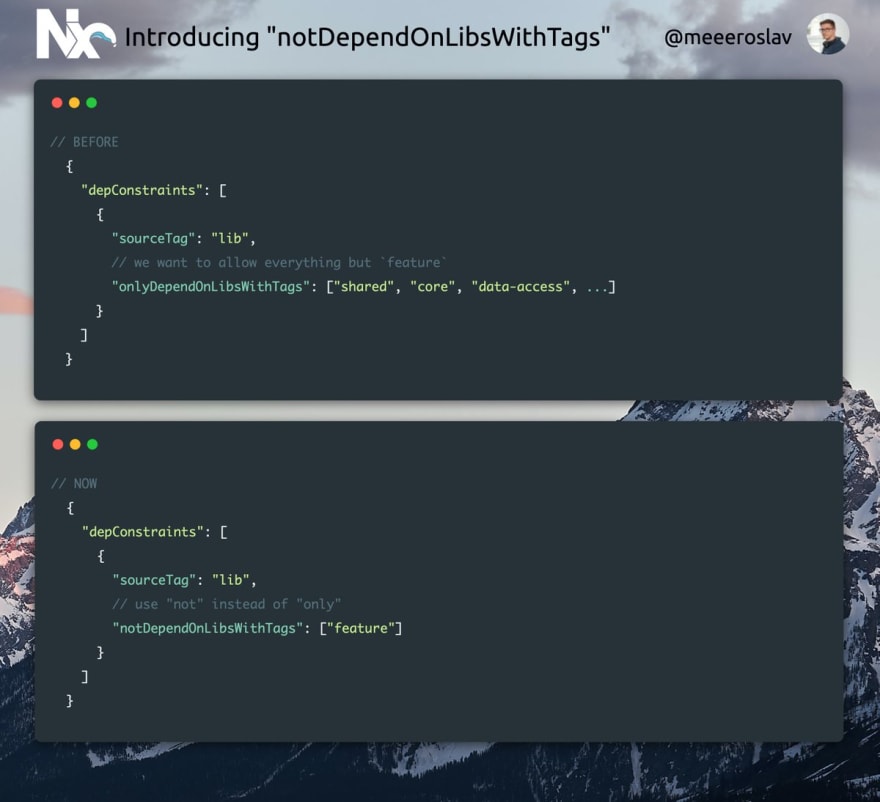 Does your @NxDevTools repo contain a lot of project tags? Do you suffer from long `onlyDependOnLibsWithTags` definitions while you actually want to ban just one of two tags?

You might be happy to know there is now `notDependOnLibsWithTags` property that does exactly that.

Whether by accident or by letting your IDE auto-add the import. It often happens that the path that is being used is via the library’s TS path mapping through the index.ts entry point. This leads to a circular dependency when also tslib-c-another.ts is exported via the index.ts. Nx’s module boundary lint rule correctly highlights this as can be seen in this screenshot. 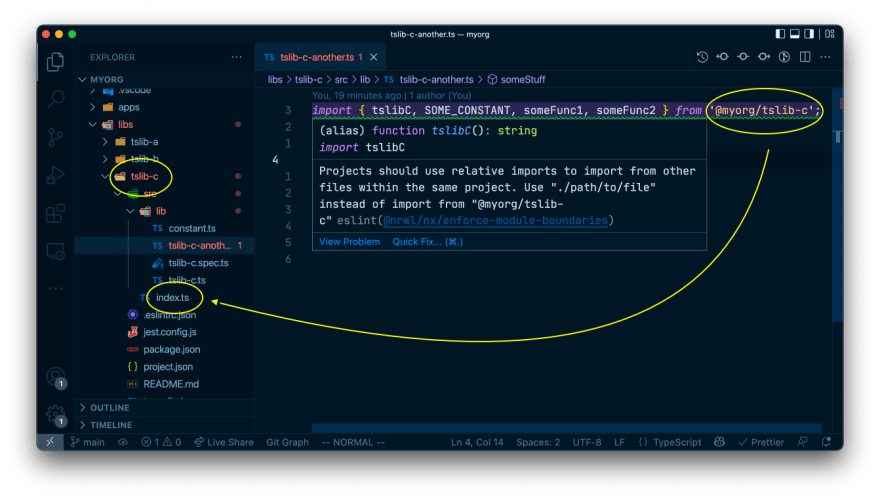 Adjusting these circular self references is easy, but can be cumbersome to find the correct imports and time consuming if you have hundreds of libs that might be affected by this. In the latest version of Nx we shipped a fix implementation for these lint rules, such that you can now conveniently add --fix to auto-adjust the imports:

This will analyze your imports, find the correct file and adjust them accordingly: 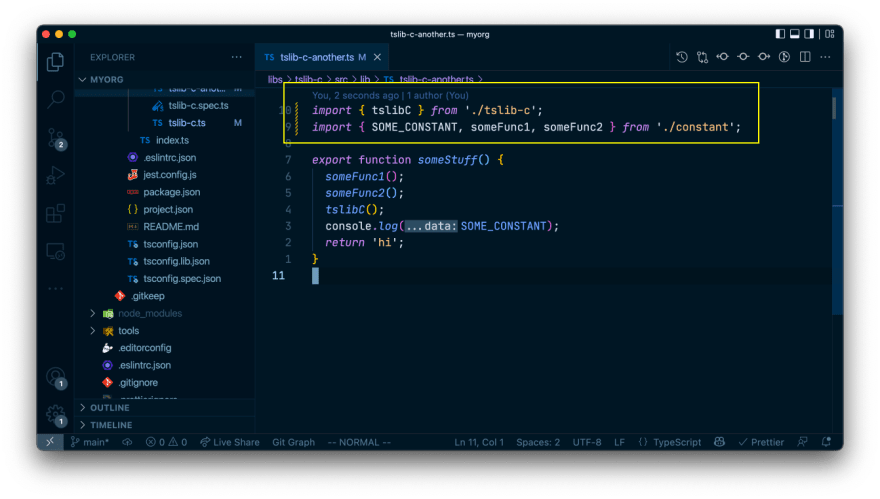 Similarly if you have relative or absolute imports across library boundaries rather than using the NPM scope, you’ll get a linting error. 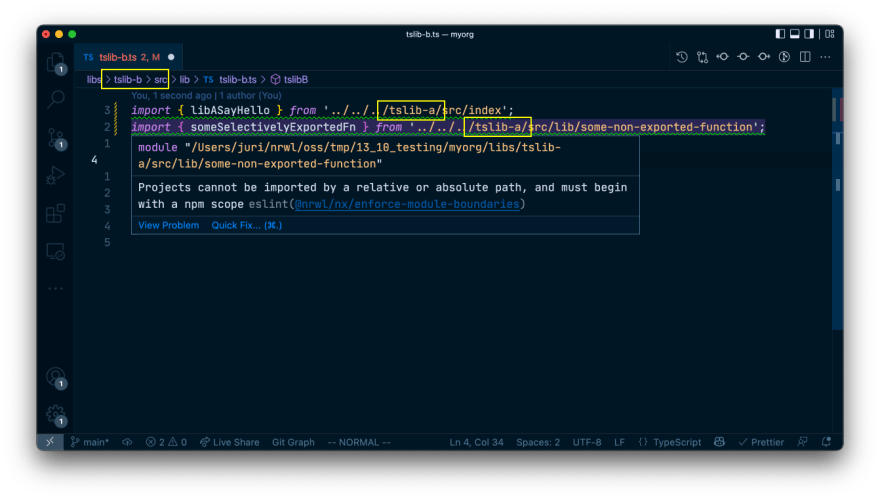 Such imports will also be adjusted by applying the --fix to your linting command: 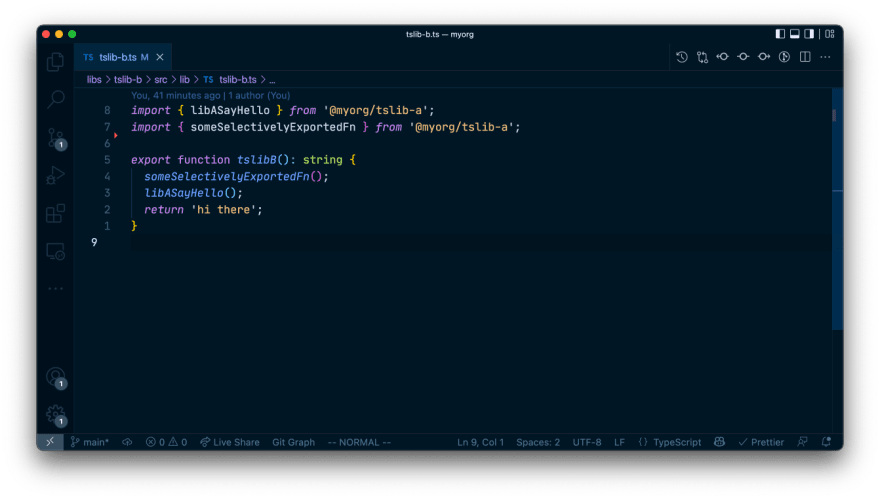 Nx 13.10 introduces support for the latest React v18 release such that users can benefit from the latest features React has to offer. Check out our latest blog post on “The React CLI you always wanted but didn’t know about” to learn more how to use Nx for React development.

We’ve drastically improved our support for React Native within Nx workspaces. Check out our latest blog posts on

We are happy to announce that in addition to the before mentioned improvements, the React Native integration in Nx now also supports Storybook. Just use

or use Nx Console to get some more help in generating the Storybook setup.

Ability to show all prompts when creating a new Nx workspace

By default when you create a new Nx workspace with create-nx-workspace you will see a couple of questions that help you find the correct setup for your needs. However, we just show a couple of the possible options, to not overwhelm you.

If however you’re curious, you can now append --allPrompts to get all possible questions asked 🙂

Alternatively you can browse the API docs on the Nx website to find out more.

You might have noticed our new @nrwl/js package we released a couple of months ago.

We have big plans with this one, not only making it the foundation for many of our other packages that need TypeScript compilation and support, but also the goto package for the best possible TypeScript experience.

Here are some of the highlights in the latest Nx Console release.

You can now open the VSCode Command menu (Cmd + Shift + P or Win + Shift + P) and enter “Nx: Run Target” to invoke the Run Target menu which allows to choose the target to run as well as the project to execute the target on.

While initially the “Generate and Run Target” panel was a static list of the usual Nx targets, it is now a dynamically generated list based on your actual workspace commands. Hence, also your custom defined targets will automatically show up. 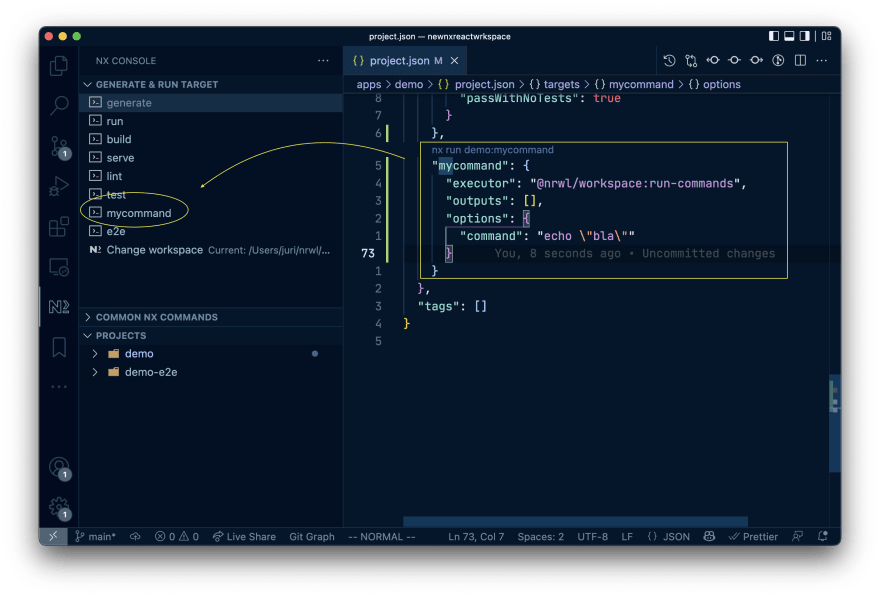 Nx Console has out of the box support to also be used on plain Angular CLI projects. With the latest version of Nx Console, Angular CLI users will receive a prompt about decorating their CLI setup with Nx to benefit from the improved performance brought by computation caching and Nx Cloud.

Our docs keep getting more and more awesome

Besides delivering awesome features, we keep improving our docs. They are essential to help discover new features and better understand existing ones. In the last weeks we’ve improved the navigation support, allowing you to navigate to a specific package with https://nx.dev/packages/<package-name> such as https://nx.dev/packages/react listing executors and generators that come with that Nx package, also improving the API docs of the individual executor options including a live embedded editor playground to experiment with different configuration setup.

Check out Benjamin Cabanes’ tweet with some short videos: 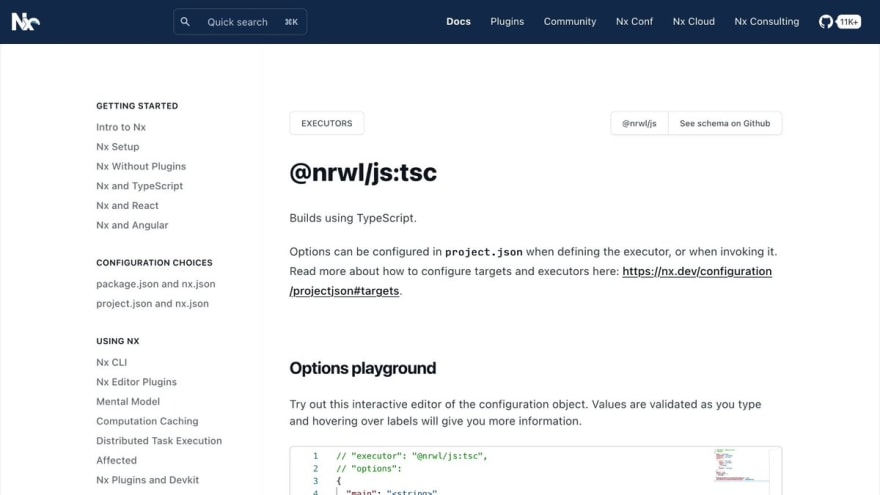 ✨After lots of work, we rolled out our new API documentation for @NxDevTools with new features! ✨

You can now play with and validate each executor's property values live from the documentation!
nx.dev/packages/js/ex…

As always, if you are looking for enterprise consulting, training and support, you can find out more about how we work with our clients here.