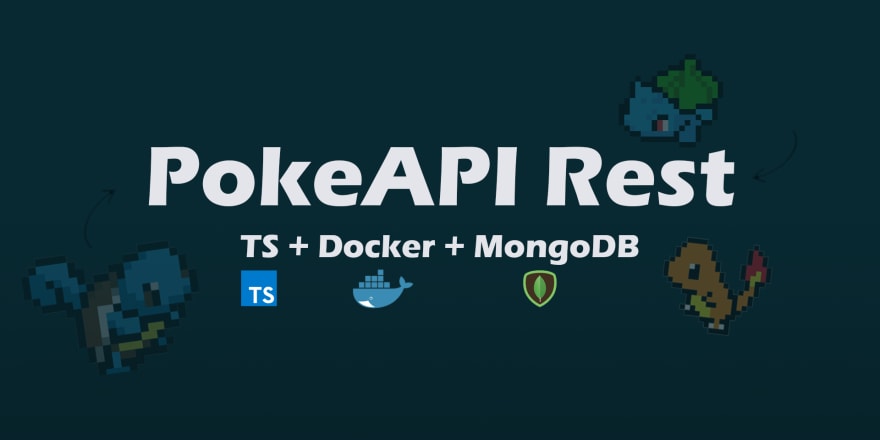 This is part 1 of a series of posts which will show you how to create a RESTful API in NodeJS. For further reading please check out the following links:

If you prefer to check out the full code, you can find the full PokeApi project here.

In these series of posts we will be learning how to create our own RESTful API in NodeJS, using an excellent web framework named Express. However, before we start, a little theory:

HTTP provides us with the following verbs, or methods: GET, POST, PUT and DELETE, which correspond to Read, Create, Update and Delete (CRUD operations) respectively. There are a few other verbs, but they aren’t used as frequently. We will be using these verbs to make requests, which will perform various operations on our data.

Since (in my humble opinion) TypeScript is the best thing since sliced bread, this is the language that we will be using. For those unfamiliar with it, TypeScript is a typed superset of JavaScript, that we compile to plain ol’ JavaScript, and, among many other things, allows us to add types to JavaScript (TS FTW).

Since we need a database to store our data, we will be using a dockerized instance of MongoDB, together with Mongoose, an ODM which makes interacting with MongoDB that much easier.

Now that we know what we are going to be working on, and how, let us get down and start coding.

Before we start, I’d like to show you a preview of how our directory tree will look by the end of this post: 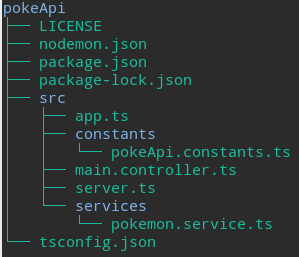 In case anyone is curious about how I generated the directory tree image, I used the linux “tree” command, and snapped a screenshot of my terminal. Pretty simple.

Since we will be using NodeJS for our project, the first thing to do is make sure it is installed on our machine.

Tip: Open up your terminal and type this command to check if Node is installed: node -v

Docker is a fantastic tool that allows us to create, deploy and run applications (or pretty much anything we want) by using containers. We can deploy a MongoDB database (or any other database, you name it) in a few minutes, with a couple of simple commands.

Tip: Run this command to see if you have docker on your machine: docker -v

As I’ve just mentioned, Docker is awesome. However, and this is purely personal taste, I prefer to deploy my containers using Docker Compose. This is a tool offered by Docker, which allows us to create a .yml configuration file, where we can specify all the details of our container, and deploy said container with a just one simple command.

With all our pre-requisites out of the way, we can now get down and start coding for real. Let us begin:

The first step is to create the file where our project is going to live. I’m going to name our project file “pokeApi”. Open up your terminal and type this:

Once inside our project file, we want to create our package.json file. Again, type the following command in your terminal:

After running this command, we will be asked a series of questions, and upon answering them, our package.json file will be created.

Tip: If you don’t feel like answering npm’s questions, use this command instead: npm init -y
You can always go back to the package.json file and edit it later.

To be able to use express, mongoose, TypeScript etc. we must install a few dependencies. To do so, run the following command:

We also need to install several dependencies needed only for development. Type:

Tip: By adding -D or --save-dev to npm i command, the dependencies installed will be listed under “devDependencies” in the package.json file

To be able to run our projects, we must create the following script in our package.json file:

Nodemon is a neat tool for developing nodeJS applications. It automatically restarts the application whenever it detects changes in the code (basically, whenever you save).

Create a file named nodemon.json, and type in the following:

This tells nodemon which files to watch and execute.

To generate our tsconfig.json file, run the following command:

Note that this file contains many, many configuration options. You may, of course, configure TypeScript according to your preferences. If not, here’s the configuration I use:

In this file we can list all the files/directories that we want git to ignore, this meaning that when we add and commit the changes made to our project, these files while remain “invisible” to git.

Tip: It is very, very, very important to add node_modules to our .gitignore. We most definitely don’t want this huge file pushed to our repository!!

To create our .gitignore file, type this (while in the root of the directory, of course):

Then, add the following lines inside the file:

Enough with the config, where’s the real coding?

Setting up our server

The first thing we are going to do is create our basic directory structure. We are going to create a directory named src, which will contain all of our project files (aside from config):

Let us open the app.ts file we just created, which will contain our basic express configuration:

We will go over Express’ config quickly:

Once this is done, we’re going to create a file to store our app’s constants. Why? Because this way we only have to declare each constant once. Whenever we need to make use of it, we just have to import it.

Furthermore, if the value of our constant changes (yes, even though it’s a constant, sometimes we need to change its value), it will change everywhere in our project, since it’s only declared in one place. All of this said, let’s create our constants file:

Now, head over to our server.ts file, where we will set up our server:

Tip: If anyone is unfamiliar with the syntax I’m using in the console.log, it’s a technique named template literals, where you type everything inside grave quotes (also known as backticks), and use interpolation (${}) to embed variables. More about this technique here.

Note that we are importing both the app we created previously, and our PORT constant.

And with just these three lil’ files, we’ve created our very own server! Fire up your terminal and execute the npm start script we created previously. You can do this by typing:

Tip: Since we are using nodemon to watch our project files, we only need to execute the previous command once. Every time we save our changes, nodemon will automatically restart our app for us.

After executing the command, you should be seeing the “Listening on port 9001” message on your terminal. Yeah! We now have our server up and running.

You can also head over to your favorite browser to check it out. Type this:

You should be seeing a message similar to this: “Cannot GET /”. I know, not very exciting… But if you’re seeing this message, it works! If not, go back and re-check your code to make sure nothing is missing.

Creating our first GET route

Since we now have our server up and running, we are going to create the first GET route and display a nice welcome message. After all, “Cannot GET /” isn’t very welcoming…

To do this, create a file named “main.controller.ts”, and type in the following:

As you may have noted, our Controller is going to act as a router; it is where we will define all of our routes for this project. Each route will execute a different action, which will be defined in a service file.

Why are we going to separate our actions in a different file? Say you defined all of the functions that interact with the database in your controller. For this project, we are going to use MongoDB as our database. Now imagine you want to change the database, and use MySQL instead. You would have to go back to your controller, and change everything, to adapt it to a MySQL database. If, however, you’ve declared all of your database functions in a different file, you wouldn’t need to change the controller at all. You could just swap the file with MongoDB query functions for one with MySQL query functions. By using a service, we keep our code loosely coupled.

Therefore, we will now create a file named “pokeApi.service.ts”, in a directory named “services”, and type in the following:

A very simple function, which returns our cute welcome message. Now, head over to our controller, and import the service we have just created:

As you can see, our main GET route will call the welcomeMessage function we have just created in our pokemon service.

So far, so good. It’s time to import our Controller into our app.ts:

And we’re done! Head over to your browser, and if you’ve done everything correctly, you should be seeing your welcome message displayed, like this:

A little bit of refactoring

Remember we created a file which would store all of our constants? You may have realized that in our welcomeMessage function (in our pokemon service), we were returning a String containing the message, which we “hard coded” into our service. Not very neat, right? What if we want to change the message? I’d have to modify the service. Not good.

Therefore, we are going to take the message, and declare it in our constants file:

One we’ve done this, we are going to import the constants file in our service, like so:

If you go back to your browser, you should still be seeing the welcome message.

In this post we’ve covered everything from setting up our project’s configuration, to defining our first route and successfully making our first GET request.

If you want to check out the full code for this post, you can find it here (branch “part1” of the pokeAPI project).

Thank you so much for reading, I hope you both enjoyed and found this post useful. Feel free to share with your friends and/or colleagues, and if you have any comments, don’t hesitate to reach out to me! Here’s a link to my twitter page.

In the following post we will be connecting our application to a dockerized instance of MongoDB, deployed with docker-compose. We will also be using Mongoose to create a data Model and Schema.

Last, but not least, here is the link to the following post:

Once suspended, nyagarcia will not be able to comment or publish posts until their suspension is removed.

Once unsuspended, nyagarcia will be able to comment and publish posts again.

Once unpublished, all posts by nyagarcia will become hidden and only accessible to themselves.

If nyagarcia is not suspended, they can still re-publish their posts from their dashboard.

Once unpublished, this post will become invisible to the public and only accessible to Nya.

Thanks for keeping DEV Community 👩‍💻👨‍💻 safe. Here is what you can do to flag nyagarcia:

Unflagging nyagarcia will restore default visibility to their posts.