Lessons from 3-years of intensive learning 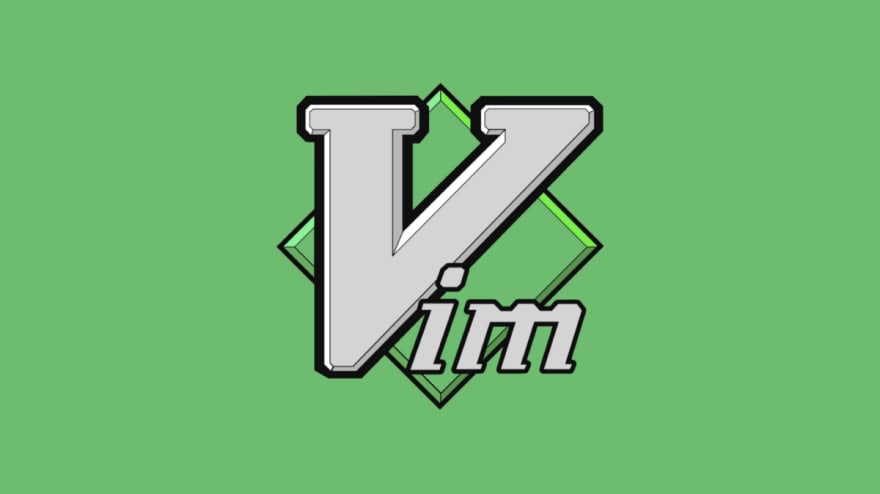 TL;DR
Using Vim is by-far the most productiveness-enhancing, enjoyable and rewarding tool you’ll ever adopt. This post was an idea I had for a long time; there are literally endless pieces of information about Vim out there, and every time I started writing I thought I was just adding to the chaos. I feel it became too important to ignore, too much of a productivity change, and probably the best tool I have ever decided to take upon learning, and so I’m sharing my process. This is an opinionated post about how I think anyone should start. As I usually prefer to get solid procedures and actual action items, this is what I tried to create here so readers don’t lose themselves in the sea of information out there.

For years Vim was a stranger to me. In one of my first job interviews as a junior, the recruiting manager wanted to test my limited set of skills and asked what my favorite IDE was. My answer was something like “Notepad++”. Needless to say, it wasn’t quite what he was expecting.
He dug further and asked, “What do you think about Vim?”
I replied: “Vim?? isn’t that this console thing no one knows how to exit?”
Long story short, I didn’t get the job…

To me, Vim was this CLI editor sysadmins used in videos and a kind of a hack-tool used by hipster developers around the world. “Why would anyone do that to themselves?” — I asked myself and others more than a few times trying to understand whenever I met another enthusiastic user. I genuinely wanted to know why are people talking about it so much, why would anyone use it? How can anyone be so motivated to use and improve their flow with Vim continuously when it’s such a terrible tool to use.
What’s wrong with modern editors?

So I tried it out. A lot.
I took vim for many, many test drives. I wanted to prove to myself I could use it. It was my nemesis and I would not accept defeat. I got to a point I made up my mind that Vim is a religion. There’s a bunch of people who believe in it with all their hearts and just the same amount of opposers, like me that couldn’t see the light. So I left Vim aside, but couldn’t help keep thinking about it as I kept noticing other professionals across dev communities speak so highly of it. Heck, even on Silicon-Valley [s03e06] the fight is over spaces vs. tabs and Vim vs. Emacs. “Really?” I thought, “Vim vs. Emacs?”, people don’t use *standard *editors?

The real change happened when I met one of the most talented backend developers I had ever worked with. He was so enthusiastic about Vim, had so much knowledge, and most importantly worked so freaking quickly and smoothly I had to know what he was doing. This leads to the beginning of my “why”…

Honestly, Vim is not the most accessible tool to adopt. Hell, it’s hard.
Vim has a very steep learning curve, but rest assured: if you try, don’t give up, and be consistent, it’s 1000% rewarding. 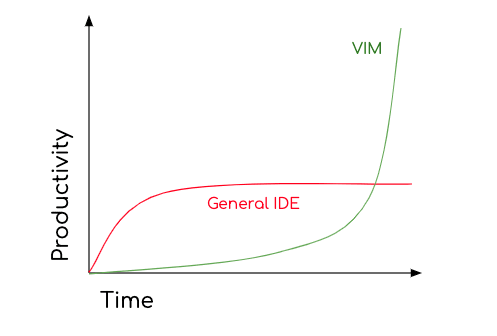 Time vs. Productivity of IDEs

The visual above is a simple demonstration of my learning curve experience. With any other IDE, I became semi-productive quite quickly (“semi” is only said in retrospect after knowing what Vim can do..). However, the green Vim curve shows my starting struggle which, after a while turned into an incredible skill.

After a few brutal fights where I returned to my fallback IDE with my tail between my legs, I made a decision to actually LEARN Vim. Here’s how I did it: 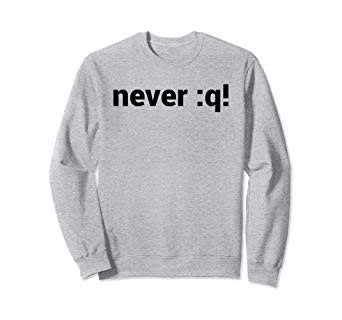 Rotating the joke on VIM… don’t quit the fight; it’s worth it

After a few days of reading, I slowly started getting the grasp of movement in Vim using the famous hjkl, and learned to search and save keystrokes. I began understanding how Vim operates. What's the fastest and most elegant way for doing every single change. I started finding myself getting out of bed after reading a tip to try it out and writing it down in my notebook.

Diving right in may not be for everyone. If you’re not yet willing to drop everything else and use Vim alone, you may want to try out some excellent integrations for IDEs; a popular one is VSCode’s Vim mode which adds most of Vims functionality and abilities right in your beloved (and soon to be ditched 😉) IDE. I tried it and had a hard time finding 100% of the functionality I was used to, so I went straight back to full-on Vim.

Funny question to ask, but — right now. You may be launching a new project or starting a new job; these are just a trigger to adopt a new life-changing tool. Nothing has to be dramatic; you can pick it up as you go. As long as you’re consistent and determined, within a few weeks, you’ll get to the point discussed earlier where no other tool is required anymore. You'll be past the point of just being productive: you'll be faster in vim than anything else.

Jokes aside, mastering Vim is a life changer for any writer. Yes, it’s designed to edit code, but I got to a point I’m writing my text there since I feel more confident, productive, and comfortable. Here’s a nice piece: “Vim for writers”.

Whether you’re in IT, DevOps, full-on developer, the occasional script writer (and scriptwriter 😁), or data analyst: everyone can use Vim and enjoy it to the max. I got to write Python, Golang, Crystal, TypeScript Bash and a lot of text (these lines right now, for example). There's no text editing situation I can think of for which vim is not a perfect solution.

By now, you learned that Vim is one of the most versatile, customizable tools out there. Not only it has endless plugins, but you can also change your configuration file (the .vimrc) and can pretty much change everything. Having that said, you may want to start Vanilla. Here’s a good video that can save you a lot of plugin installations just by knowing Vim’s built-in abilities. The one thing that is recommended to use is Tim Pope’s Vim-sensible plugin.

Having one of the largest enthusiasts communities out from there, Vim has endless plugins, most of them can be found on GitHub. A word of warning though, while plugins are helpful and enjoyable, they have a few downsides with them:

Here’s a rather short list of plugins that I use (I try to maintain them by removing the ones I don’t use anymore occasionally). you can also find the full list of them together with my .vimrc on GitHub.

That’s it, and thanks for making it this far!

I hope this post helps you get started and find your way towards an enjoyable productivity change. I know the internet is full of information and ideas, but since I had to figure out for myself what works best, and made it only after a few attempts, I thought of sharing the process with some other people looking for some guidance. I hope you enjoyed reading and will share this with anyone looking to make his first steps into Vim!

Big thanks to fuzzymidget Reddit user who offered his help with styling and language corrections, commenting on my post on subreddit r/vim.

I invite you to take a peek at my own .vimrc configuration, suggest changes or take ideas.

My name is Omer, and I am an engineer at ProdOps — a global consultancy that delivers software in a Reliable, Secure, and Simple way by adopting the DevOps culture. Let me know your thoughts in the comments below, or connect with me directly on Twitter @omergsr.

With his permission, adding @russellbateman 's comment which gives another angle and some insights I couldn't have come up with on my own:

I have used Vim/vi for 35+ years. One problem in the (rather religious) discussion of editors is that folk only compare editors. Vim/vi isn't merely an editor; it is a full, raging text processor! Mere editors, even really fine ones like Notepad++, typically don't walk very far down the road of text processing. They're present as editors only.
Until comparatively recently, IDEs that offered vi compatibility really only offered the skin-deep face of modeful editing--that part of vi that is what puts people off. They did not offer .exrc or .vimrc support nor keystroke power much deeper than the mode. A lot of people were and still are left perplexed as to why anyone would ever be masochistic enough to learn Vim/vi just so they can switch it on in their IDE.
Fortunately today, while exhibiting some annoying practices in terms of integration, first-rate IDEs like JetBrains IntelliJ IDEA offer more complete Vim integration than the silliness early IDE attempts made two decades ago. Personally, and because I grew up a UNIX command-line guy, I am not the least bit bashful about popping up a console outside my IDE to run Vim/gVim even though I know that IDEA's vi emulation is probably up to it.
Last, I generally never install any plug-ins despite recognizing their utility. I'm not hostile to plug-ins, it's that, just as vi/Vim is everywhere nowdays (and the only game in town on freshly brought-up Linux systems), plug-ins are not ubiquitous, so I don't even think about them until I'm doing something really specialized, not a frequent situation.

Once suspended, omerxx will not be able to comment or publish posts until their suspension is removed.

Once unsuspended, omerxx will be able to comment and publish posts again.

Once unpublished, all posts by omerxx will become hidden and only accessible to themselves.

If omerxx is not suspended, they can still re-publish their posts from their dashboard.

Once unpublished, this post will become invisible to the public and only accessible to Omer Hamerman.

Thanks for keeping DEV Community 👩‍💻👨‍💻 safe. Here is what you can do to flag omerxx:

Unflagging omerxx will restore default visibility to their posts.