DEV Community is a community of 617,845 amazing developers

I have previously blogged about publishing VSCode extensions to VSMarketplace (using GitHub actions). However, that workflow relied heavily on the branching strategy and was on assumption that anything that is merged to master is ready for publishing to VSMarketplace. It worked great, but occasionally I felt the need to test the extension from master and I wanted a way to approve before I decide to publish to marketplace. In this post we will see how I used ChatOps with the help of GitHub actions and Issues to achieve the same.

How will it work?

If you are short on time, the workflow I have implemented is as below.

Curious on how each step is implemented? Read on.

The goal of CI is that, with each commit, we can produce shippable .vsix (packaged extension) file as an artifact for our extension. So we additional triggers in our build.yml file. 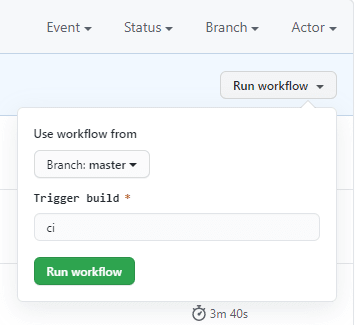 As part of CI, once we produce artifact, we create the issue so that we can monitor issue for dispatch commands. I have a separate job create-issue in build.yml which creates the issue only if CI is running against master branch.

You can take a look at the job here

The output of the job will open an issue something like this (screenshot is from previous release). 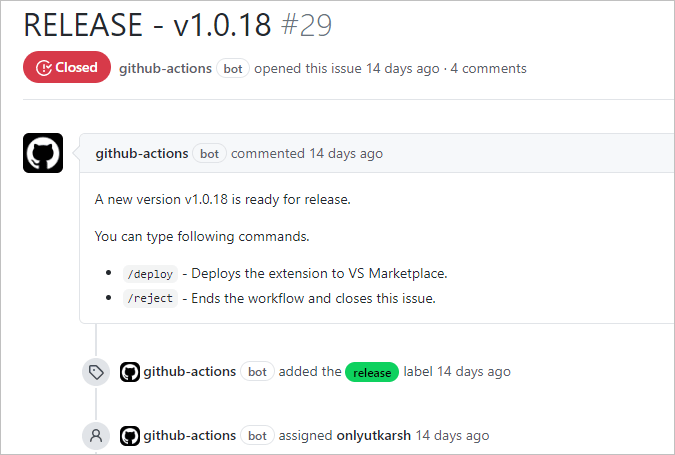 The required issue is created and now is the time to monitor for issue comments with specific commands we defined - /dispatch and /reject.

We can do this with issue_comment trigger as below.

With the above trigger our dispatch.yml workflow triggers whenever a comment is added on our issue. To dispatch the events I am using action from Peter Evans as below.

As you can see, in the last line (#7), I am supporting only deploy and reject commands.

Now, I want to deploy to marketplace, when I see /deploy, and reject the deployment when I see /reject in issue comment.

For this, I have two workflow files deploy.yml and reject.yml with trigger similar to below.

So as soon as the user types /deploy command as a issue comment, the command is captured and dispatched by dispatch.yml workflow.

Our deploy workflow just publishes the extension to VS Marketplace and before doing this it also updates the comments to the issue which triggered the workflow. 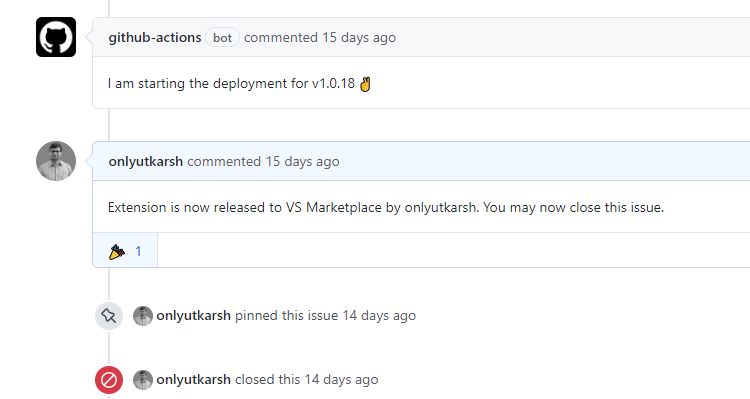 There you have it! A quick and simple way to have a approval process in GitHub actions using ChatOps. I am confident that GitHub Actions will have OOB approval flows in Actions, but until that time, this is one way to achieve it. Do let me know if you know or have implemented similar things in a better way - I would love to learn about it.

VSCode collects data from its users, here's how to disable that

ESLint not working in VSCode? Help build a troubleshooting checklist!

Why is VSCode so popular?

Utkarsh Shigihalli
May 6th, 2021: What did you learn this week?
#weeklylearn #discuss #weeklyretro
How to test Your API inside VSCODE
#webdev #beginners #vscode #productivity
Censorship on DEV Community 😶🤐
#meta #discuss #watercooler #healthydebate