The other week I made a post on LinkedIn. Here it is 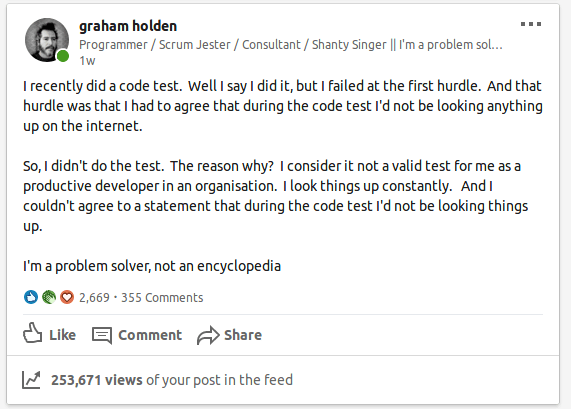 I was absolutely shocked at the response. I mean, I've never had so many people interact with me on LinkedIn.

The code test in question was via one of those online platforms. It was pretty soulless. No interaction with the company who had asked me to do the test, in fact before being asked to do the test I'd had some generic emails from them.

This got me thinking about interview processes.

But I've come to the conclusion that the hiring process I would favour in the future would be something like.

I don't pretend this will work for all organisations. But I genuinely feel it would be a sensible approach for many organisations, and be a pleasant experience for the candidate.

Hiring takes time, it's an investment - and it should be seen as such.

Also, be transparent early on about the salary for the role, the benefit for the role - these are things people want to know early on - so they can make an informed decision before wasting peoples time.

You will not do it later (most likely) - I'm a procrastinator, I know

How to make the Recruitment process "more humane"

Once suspended, opensussex will not be able to comment or publish posts until their suspension is removed.

Once unsuspended, opensussex will be able to comment and publish posts again.

Once unpublished, all posts by opensussex will become hidden and only accessible to themselves.

If opensussex is not suspended, they can still re-publish their posts from their dashboard.

Once unpublished, this post will become invisible to the public and only accessible to gholden.

Thanks for keeping DEV Community 👩‍💻👨‍💻 safe. Here is what you can do to flag opensussex:

Unflagging opensussex will restore default visibility to their posts.