More specifically in JSF paradigm, the mapping is as follows:

Model - The services or DAOs (Data Access Objects) in addition with the entities that they produce or consume something into the web application. The entry point to this option is the managed bean (e.g. UserBacking.java or UserMB.java), but in Java EE (Java Enterprise Edition) that JSF is part of it nowadays, these artifacts are typically implemented by EJB (Enterprise Java Beans and JPA (Java Persistence API) respectively.

View - The user interface (UI) components such as PrimeFaces UI components and their composition into a full page. This is fully in the domain of JSF and implemented by JSF UI-Components and Facelets respectively. There are several libraries for user interface such as PrimeFaces, OmniFaces, MyFaces or ICEFaces. In comparison with JSF framwork, there is also ADF (Application Development Framework) from Oracle.

Controller - The traffic transactions that handles commands and incoming data from the user, routes this to the right parts and selects a view for display. In JSF one doesn't write this controller, but it's already provided by the framework (FacesServlet). 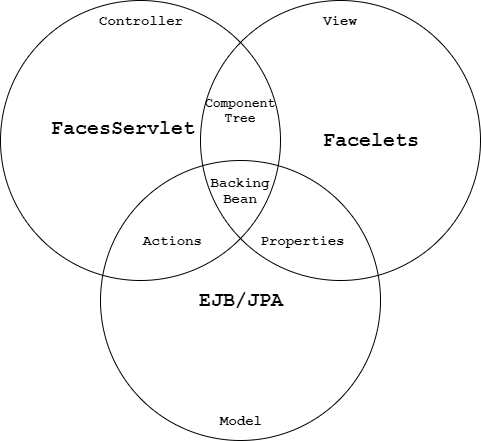 Once suspended, orestispantazos will not be able to comment or publish posts until their suspension is removed.

Once unsuspended, orestispantazos will be able to comment and publish posts again.

Once unpublished, all posts by orestispantazos will become hidden and only accessible to themselves.

If orestispantazos is not suspended, they can still re-publish their posts from their dashboard.

Once unpublished, this post will become invisible to the public and only accessible to Orestis Pantazos.

Thanks for keeping DEV Community 👩‍💻👨‍💻 safe. Here is what you can do to flag orestispantazos:

Unflagging orestispantazos will restore default visibility to their posts.